Chloee Thomas, from Norwood, won first place at both the state and national levels in the Global Analysis and Decision-Making event. A written test on international business was used to designate 15 finalists, and then a case study presentation before a panel of judges determined the final ranking. 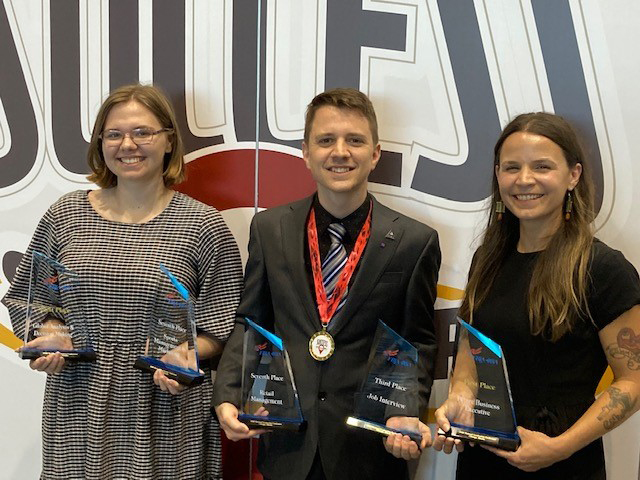 Toby Neal, of Mt. Pleasant, won third place in the Job Interview event. A part-time employee at Sherwin Williams, he also received the sixth-place award in the Retail Management event.

The event was comprised of a written test, a cover letter/resume and an interview with a group of judges from the Chicago business community.

Phi Beta Lambda is the college level of Future Business Leaders of America and beginning this fall will be identified as FBLA Collegiate. Membership is open to all students since business awareness, leadership development and career-planning procedures are essential skills for all successful graduates, according to SCC Chapter advisers Katrina Sams and Dan Hazlett.

Hazlett accompanied the group to the national conference and was elected to a second term on the organization’s Board of Directors.

“We are very proud of both the SCC students who competed at the state level and are especially excited to have these three represent the college and the state so successfully at the national level,” said Sams, a former state and national PBL award recipient. “It is especially prestigious since our students are in competition with four-year colleges and universities across the state and then the nation. These awards reflect the quality education SCC students receive.”

In addition to the individual awards, SCC was also named as one of the National “Gold Seal Chapter” honorees for the 19th year in a row.