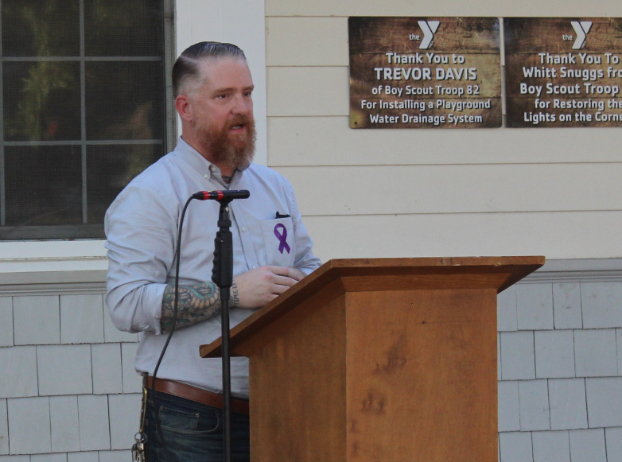 Delton Russell speaks about his struggles with addiction during the International Overdose Awareness event.

August has always been a tough month for Delton Russell. Twenty years ago, on Aug. 6, he lost his best friend to an overdose.

“I think about that dude every damn day,” he said, holding back tears.

A former executive at Will’s Place, who now works as a recovery specialist with Partners Health Management, Russell was a teenage addict and has been in the recovery process for more than two decades.

He credits his recovery for helping bring about all the good things in his life, including his wife, his home and a stable job.

Kari Womack is also painfully aware of the power of addiction, especially to drugs. She said she lost nine people in her life due to overdoses over the last five years and her own struggles strained relations with her family when she was younger.

“It’s a hard path to walk down,” Womack, a peer support specialist who works at Uwharrie Harm Reduction Initiative, said about being an addict.

Russell and Womack shared their truth in front of a crowd of more than 50 people Wednesday night at YMCA Park to mark International Overdose Awareness Day.

Organizations such as Will’s Place, Bridge to Recovery and Stanly Community Christian Ministry were present to share resources with those in attendance.

Rows of small purple flags — representing the more than 3,700 people in the state who have died of an overdose over the last year — dotted a section of the park. There were also numerous lighted memorials laid out to form a walking path, as a way to remember the 25 Stanly County residents who died of an overdose last year. 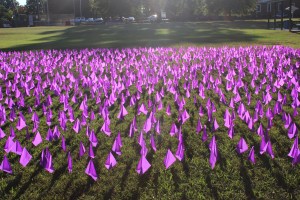 Purple flags represented North Carolinians who have died from an overdose in 2021. 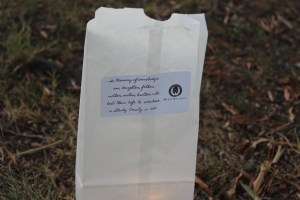 One of many lighted memorials in remembrance of people who have died from an overdose.

People also had the opportunity to write the name of a loved one who died from an overdose or their own name as someone who survived an overdose on a large #EndOverdose sign. 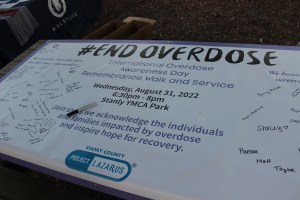 A large sign adorned with names of people who died from an overdose and those who have recovered.

The event, which included a remembrance walk, was sponsored by Stanly County Project Lazarus, a coalition of public health, health care, law enforcement, mental health personnel and concerned citizens working to combat drug abuse. It represented a safe space for people to feel comfortable to talk about their addictions and loved ones lost without feeling any kind of shame or stigma.

“This is a place where we want people to be able to talk about stigma and to be honest about it,” said Wendy Growcock, Project Lazarus coordinator and public health education specialist with the health department. “Because if we’re not honest about it, we’re not going to make any changes in Stanly County.”

“I’m an addict in recovery and I will always be that,” Womack told the crowd, “but I am not a stigma you’re going to classify me as. I am a person and I am a human being.”

Stanly has struggled over the years to blunt the ravages of the opioid epidemic, repeatedly ranking in the top 10 in the state when it came to overdoses. But the numbers seem to have improved of late.

The county last summer fell out of the state’s monthly list of top 10 counties with the highest rates of overdoses leading to hospital visits. Since 2020, Stanly County has had a 21 percent decrease in overdose deaths and a 20 percent decrease in overdoses, according to a letter sent to county commissioners from Stanly County Health and Human Services Board Chairwoman Jann Lowder in early May.

Additional help is on the way as the county is set to receive close to $4.7 million over an 18-year period from the national opioid settlement reached last year between the country’s three major drug distributors — Cardinal Health, AmerisourceBergen and McKesson — and pharmaceutical company Johnson & Johnson. The settlement provided the groundwork for billions of dollars to begin flowing into communities across the country for addiction treatment, prevention services and other expenses from the epidemic.

Stanly has already received almost $180,000 from the settlement and should receive another $395,000 within the coming months.

“I see some positive outcomes happening in the community,” said Deputy EMS Chief Mike Campbell, who spent several years as a first responder with the Community Paramedic Program, a post-overdose response team created in 2019 to target people suffering from opioid overdoses and help connect them with treatment options such as Monarch, Nazareth Child & Family Connection and Project Lazarus.

Many of the speakers acknowledged that people struggling with addiction cannot get through recovery by themselves; it takes the support of the community to make sure positive behaviors are long-lasting.

“It’s going to take a village to save people,” Womack said.

While recovery from addiction is a process that often takes a long time, the speakers stressed there is light at the end of the tunnel.

“I spent so many years of my life numb, just completely numb, and I feel every damn thing now,” Russell said. “And I’m grateful as can be for it.

“My recovery has given me the opportunity to be set free.”