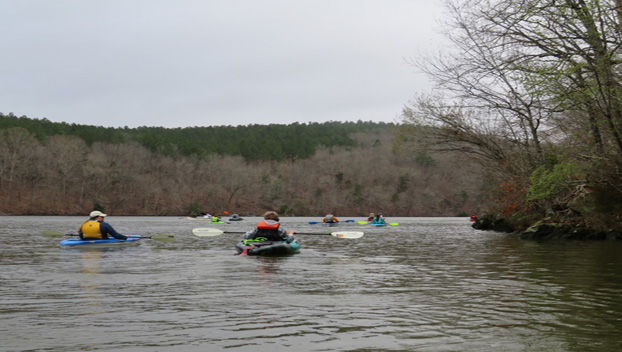 Concerned with on-site hazardous waste from Alcoa, which continues to leach into nearby waters in Badin, several groups wrote recently to the N.C. Department of Environmental Quality’s (DEQ) Division of Water Resources about ways the organization could improve.

The actions come as the site, now known as Badin Business Park (BPP), recently reapplied for its National Pollutant Discharge Elimination System (NPDES) permit, which expires at the end of October. Companies like Alcoa are required to reapply every five years, according to DEQ spokesperson Anna Gurney.

Protect Badin Lake, which was created in 2020 and has more than 200 members on its mailing list, asked for NCDEQ to not only deny the renewal of Alcoa’s NPDES permit as submitted, but also to remove three discharge points around Badin Lake, due to the impacts on human health. The Aug. 16 letter, which was shared with The Stanly News & Press, was written by Jennifer Caldwell and Colleen McDaniel, PBL’s co-presidents.

High levels of cyanide and fluoride have routinely been detected in stormwater flowing from Alcoa through a discharge point known as Outfall 005, potentially contaminating Little Mountain Creek, and then flowing into larger bodies of water including Lake Tillery.

“PBL is extremely concerned about the water quality of our recreational bodies of water including Badin Lake and Lake Tillery,” the letter stated.

People can be exposed to cyanide by “breathing it, absorbing it through their skin, or eating foods that contain it,” according to the Centers for Disease Control and Prevention. Small amounts of cyanide can cause dizziness, headache, nausea and vomiting and rapid breathing, while large amounts could cause respiratory failure leading to death. Exposure to high levels of fluoride could potentially result in tooth decay.

In its letter, PBL also requested the removal of Outfall 012 and Outfall 013, since both are in close proximity to public swimming areas.

“If you’re concerned about the health of people, swimming and fishing, and even the aquatic life, that’s not appropriate at all,” Caldwell said.

The group played a key role in pressuring NCDEQ to deny a proposed Special Order of Consent last February that if passed would have let Alcoa divert contaminants from Outfall 5, which flows into Little Mountain Creek, to another location, which would flow directly into Badin Lake. DEQ received more than 300 public comments about Alcoa’s SOC application.

Though Alcoa’s permit application does not divert Outfall 005 into Badin Lake, it will continue to have an impact on Lake Tillery downstream.

“Lake Tillery is the major source of drinking water for Montgomery County, where most of our members live,” the letter stated.

“Our issues haven’t changed much,” Caldwell said. “We want the lake to be clean and the only way to guarantee that the lake is clean is to clean up the mess.”

Robyn Gross, director of Alcoa Transformation/Asset Planning & Management, provided The SNAP an emailed statement in relation to the permit renewal.
“Our water quality permit requires us to carefully monitor stormwater and groundwater discharges at numerous locations across Badin Business Park,” she said. “The site has largely complied with state and federal regulations. Fluoride discharges at one outfall occasionally exceed state standards but the discharges remain well below the EPA’s threshold for drinking water. We will continue working to further reduce the concentration of fluoride discharges in this area.”
“Badin Business Park is committed to the continued protection of water quality,” she added. “The site is managed to protect the local community and the environment.”

Ryke Longest, co-director of Duke University’s Environmental Law and Policy Clinic, wrote a letter on behalf of the Yadkin Riverkeeper, expressing similar concerns as those raised by PBL.

Aside from eliminating Outfalls 012 and 013 and preventing Alcoa from diverting discharge from Outfall 005 into Little Mountain Creek, Longest recommends the new permit should require Alcoa to monitor for more contaminants, including polycyclic aromatic hydrocarbons (PAHs), polychlorinated biphenyls (PCBs) and metals.

The company should also remove the source material for the pollutants prior to submission of any permit applications in the future.

Alcoa opened its aluminum smelting operation in Badin in 1917 and the company dumped waste — specifically spent potliner, a byproduct of smelting — without regulation until 1980 when the EPA established the first Resource Conservation and Recovery Act regulation declaring spent potliner a hazardous waste.

Although Alcoa shut down its Badin operation in 2010, the spent potliner remains buried in the ground.

“Implementing our recommendations would provide greater protection to Badin Lake and Little Mountain Creek, as well as increase public confidence in the efforts being made to clean up the hazardous waste around Alcoa Badin Works,” the Duke letter stated.

“NC DEQ has issued permits for the Alcoa Badin Works facility that are too loose to meaningfully protect the health of the surrounding communities,” the letter stated. “NC DEQ needs to protect the surface waters, not create permits that allow compliance by manipulating the sampling system.”

Gurney said due to the public interest for Alcoa, it is likely there will be a public hearing regarding the permit renewal but did not specify when. This would include a public comment period, which would be open for 30 days.