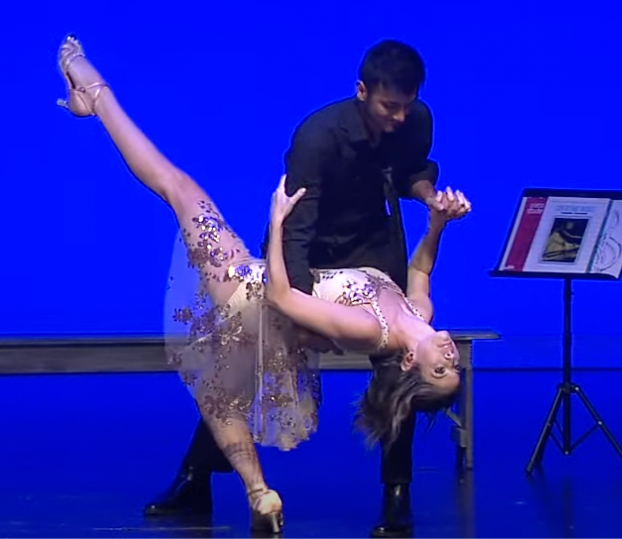 Manuel Ubaldo dances the rumba with partner Hannah Domenech during the 10th annual Stanly County Dancing With the Stars event at the Agri-Civic Center Saturday night.

The Stanly County Agri-Civic Center was transformed into Tinseltown as classic numbers from some of the most beloved movies, including “Top Gun” and “Grease,” were evoked as part of the 10th annual Stanly County Dancing With The Stars Saturday night.

With the theme “Hooray For Hollywood,” the event, which included a live audience for the first time in several years, set a record for money raised by the end of the night: $130,868 for the Butterfly House Children’s Advocacy Center, which provides evaluation and supportive services for survivors of child maltreatment, including neglect, sexual and physical abuse.

“I truly feel like this is the single best event here in Stanly County,” said Butterfly House Director Amy Yow, noting how “humbled” she is that each year so many people from across the community step up to be part of the program.

“Being here tonight is even more important than before,” Yow said.

Underscoring the need to support organizations like the Butterfly House, Brian Freeman, facility executive at Atrium Health Stanly, told the audience that roughly 4 million children are referred to child advocacy groups across the country each year for abuse or maltreatment.

“That’s enough to fill a little over 10 NFL football stadiums,” he said.

Lisa Almond, a guidance counselor with Stanly County Schools and this year’s guest speaker, personally knows how vital Butterfly House is to the community.

“The Butterfly House holds a special place in my heart,” she told the crowd.

That’s because her daughter- McKinley Almond- was impacted by the organization. When McKinley was about 10, she told her mother that her stepgrandfather touched her inappropriately. Unaware of what had been taking place, Almond said she felt like she failed as a mother.

After talking with police, McKinley was referred to the Butterfly House, where she felt safe enough to tell her story to Yow and law enforcement. Her grandfather was subsequently arrested.

Aside from helping her daughter, who was the guest speaker at the DWTS event in 2018, Butterfly House also provided key support to Almond.

“At one of the lowest times in my life, being there for my child while trying to go through this process myself, they picked me up and supported me,” she said.

The Butterfly House has cared for nearly 3,000 children since opening in 2005, according to Yow, and it is events like DWTS which helps the organization have such a key foothold in the community.

Ten dance teams had been raising money for the Butterfly House through charity events while spending several months preparing a dance routine for the show.

The Judges’ Choice Award first-place winners were Uwharrie Bank account executive Hannah Domenech and Uwharrie traveling CSR Manuel Ubaldo, who performed the rumba to “Shallow” by Lady Gaga, from the 2018 film “A Star Is Born.”

“We work together and we just decided it would be a good opportunity to give back to the community,” Domenech told master of ceremonies Wes Tucker about why they decided to team up.

The three judges were impressed with the “elegance” of the rumba, noting Domenech and Ubaldo took risks by performing a slower routine than many of their peers.

“To slow things down is always harder, it’s more difficult,” said Blair Johnson, owner of Uwharrie Dance Center in Mount Gilead. “You guys took some challenging technique and nailed it.”

Second place went to Karissa and Brian Johnson, both senior pastors at Perfecting Life Global Ministries, who performed a freestyle to “Ease on Down the Road,” a song from the 1978 movie “The Wiz.”

In choosing a movie song to perform, the Johnsons wanted to pick something that would help them stand out.

“Everybody knows about ‘The Wizard of Oz’ and Dorothy and so when we heard the Hollywood theme, we wanted to do something that was different and added our own personality, who we are and our identity, and Michael (Jackson) and Diana (Ross) came to our brains,” Brian Johnson said. 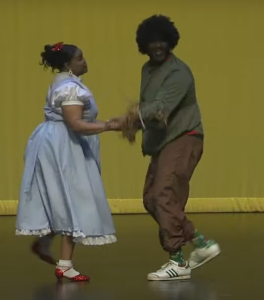 Brian and Karissa Johnson perform a freestyle dance to “Ease On Down the Road.”

For the Audience Award, given to the team that raised the most money, the winners were Sabrina Shaw, a hair stylist at Superior Hair Salon, and Johnnie Little, a certified personal trainer. They danced the merengue to “Danza Kuduro” from the movie “Fast 5,” which included several intricate lifts.

“We just liked the Latin scene, so we decided to go that way,” Shaw said. 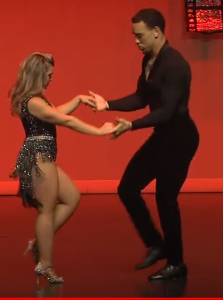 Sabrina Shaw and Johnnie Little performed the merengue to “Danza Kuduro” from the movie “Fast 5.”

Rebecca Huneycutt, a certified nurse midwife and former Butterfly House employee and Dan Donaghue, special education teacher at West Stanly High, took second place in the Audience Award for their jive to “You’re The One That I Want” from “Grease.”