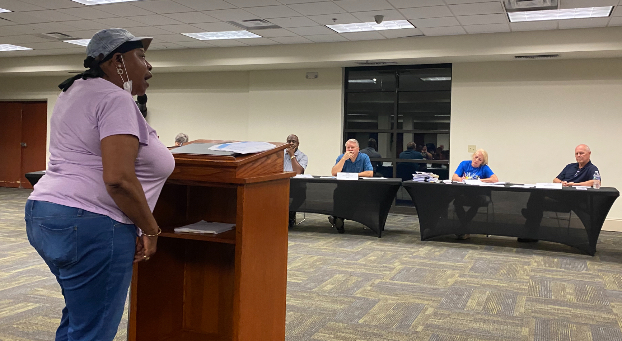 Alfreda Miller and her four children live in one of the worst apartment units in Amhurst Gardens. The toilets and bathtubs in her two bathrooms overflow with sewage and feces every few months, she said.

She has thrown away countless towels and blankets trying to soak up the water. Her children help scrub the tubs after each incident.

Miller, 38, had previously shared her story with The Stanly News & Press, but on Monday night she detailed it before Albemarle City Council, during a lengthy town hall meeting at the E.E. Waddell Center where council members listened to concerns raised by public housing residents.

“Who wants to throw dirty towels with poop on them in their washing machine?” she said, holding back tears. “This is my day, this is my life, that I have to deal with.”

Her unit on Inger Street is one of several in the public housing community impacted by collapsed pipes, which have caused problems for residents.

Miller said she also has mold in her home, which makes her fear for any potential long-term health effects. She is especially worried for her 9-year-old daughter, who has asthma. She said she believes her daughter’s condition has worsened since the family has lived there.

The conditions have gotten so bad Miller is afraid to invite people into her apartment.

She signed paperwork in late May to move into a vacant property while her unit is renovated but, several months later, she and her children remain in the same unit, despite having all of their belongings packed.

The council decided to schedule a meeting with residents after initially hearing from them during a council meeting in August. At that meeting, several council members mentioned it was the first time they had heard of such problems. Public housing director Dr. Kim Scott spoke in more detail about some of the problems during the Sept. 6 council meeting.

Victoria Ingram, who has lived on South Bell Avenue for more than 30 years, was one of the residents who spoke during the August meeting and again Monday. She’s had numerous problems over the years with household items, including her refrigerator, air conditioner and the toilet in her bathroom.

She’s had to discard new furniture due to infestation of bed bugs and often has to throw out food because her refrigerator is not working. Her air conditioner recently stopped working and it felt like “hell in that apartment,” she said.

“This doesn’t come easy to me because I’m on a fixed income,” Ingram said. “I’m to the point where I’m fed up.”

At least half a dozen residents spoke, including some, like Angelina Kelder, who felt the city could have done more over the years to address the issues.

“The thing that still continues to bug me is that you all continually pass the buck on to somebody else instead of taking accountability,” she said.

In response, Mayor Ronnie Michael said the council is “very disappointed” in the conditions many residents are living in, adding that “we’ve got to figure out answers and that’s what we’re hoping Dr. Scott can help us to figure out.”

Since public housing is under the jurisdiction of the city, Scott told council he has struggled to help his residents as a result of the red tape he has to go through on the municipal level. He alleged that the procurement process changes often and when he has gone to the finance department with funding requests, he is told he does not have the money in his budget to spend.

Michael stressed Scott needs to work within his budget and follow the proper procedures, including having written specifications for what is needed.

The city’s 63-page Purchasing and Contracting Policies and Procedures Manual was last updated in January 2021 and all departments are educated on it, according to a statement sent to the SNAP from the city.

While he said he understands rules and regulations need to be followed to procure necessary items for residents, City of Albemarle Section 8 inspector Eric Allsbrook said “some rules are made to be broken.”

When it comes to appliances like refrigerators and stoves not working, “that’s a 24-hour emergency,” Allsbrook said.

Councilman Benton Dry emphasized the importance of everyone coming together to try and solve the problems.

“We’re here tonight to listen and do what we can to move this thing forward,” he said. “We appreciate what each of you have said and I hate like hell that you’re in this situation.”

At the end of the meeting, Michael told the SNAP: “The city is dedicated to finding how to address these issues and move forward and correct the problems.”

In a presentation before the residents spoke, Scott mentioned there are 10 units with existing sewage line issues.

The facilities are about 50 years old, as the housing community has been around since 1971.

He first discovered the problems in January, when he took over as director and stepped in what he thought was a pool of water but instead was sewage leaking from one of the units.

Scott and his staff are working with Stogner Architecture in Rockingham to determine the severity of the problem and hire contractors to renovate the properties. Since 1991, Stogner has worked on 18 public housing projects within the city, according to its website.

In addition to the collapsed pipes, Scott has found 30 inoperable refrigerators and stoves and four HVAC systems that are not working. Many of the HVAC units have not been serviced in six years, he said.

Scott would like to modernize and refurbish at least 20 apartment units each fiscal year. This would include mold testing and abatement, sheet rock repair and replacement, floor, ceiling and cabinet replacement, as well as painting, appliance replacement and incidental repairs.

Stogner will work with the public housing department to help identify the existing condition of cast iron sewer systems in the units and replace the existing systems with polyvinyl chloride (PVC) piping.

The sewer repair project is forecasted to begin next February, Scott said.

A key problem has been that several vacant units on Inger Street, which will temporarily house several of the residents dealing with sewer problems like Miller and her children, are still not yet ready. Scott has looked at alternative options, such as hotels in the area, but they have all been booked.

“My concern is I don’t have units to put my residents in because they’re not finished,” Scott told council.

He anticipates the vacant units should be completed within the next two to three weeks.

In addition to the sewer problems, as part of his five-year plan, Scott recently changed portions of the Admissions and Continued Occupancy Policy, including rent collection and security deposits.

He is also working to establish wrap-around services for many families, including healthcare, mental health services, youth development, childcare and literacy programs.

As part of the “Change Your Mind; Change your Life” campaign, public housing will offer several educational opportunities for residents to learn about topics such as credit repair, home ownership and workforce development.

“I love these residents and I want them to have a piece of the American Pie,” he said.