The new fees were calculated on a per gallon basis and per connection basis for new developments within the Stanly County service area by the Raleigh-based engineering firm The Wooten Company. 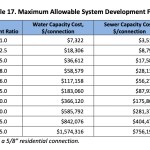 The total cost of the new infrastructure to support new development, according to the study, is estimated to be $61.8 million. Assuming an annual growth rate at one percent, the fees will generate about $4.5 million for water improvements and $373,000 for sewer improvements over the next five years.

“It is a struggle to try and meet the capital demands that we have as the system grows so these fees in my opinion are very necessary in order for us to accommodate the growth that is happening in Stanly County,” Utilities Director Duane Wingo told commissioners.

When asked by Commissioner Bill Lawhon how much on average it costs to install a water line per mile, Wingo said it costs about $739,000 for one mile of an eight-inch water main.

When asked the same question about putting in a new sewer line, Wingo said it would cost about $950,000 per mile of sewer.

Wingo also detailed the county recently upgraded from 900,000 gallons per day in its sewer plant to 1.2 million, which has cost about $7.2 million.

“Water and sewer line maintenance is very expensive,” Lawhon said, noting the new development fees will help pay for those types of improvements.

Going forward, Wingo told commissioners they could decide at any time to change the fees as long as they do not exceed the maximums as determined by Wooten.

Lawhon made the motion to adopt Wooten’s maximum fees for both sewer and water. It was approved 6-1, with Chairman Tommy Jordan voting against it because he felt the amounts were too expensive.

Commissioners then unanimously approved a separate motion to adopt the SDF ordinance, substituting Wooten’s maximum fees for the staff-recommended ones.