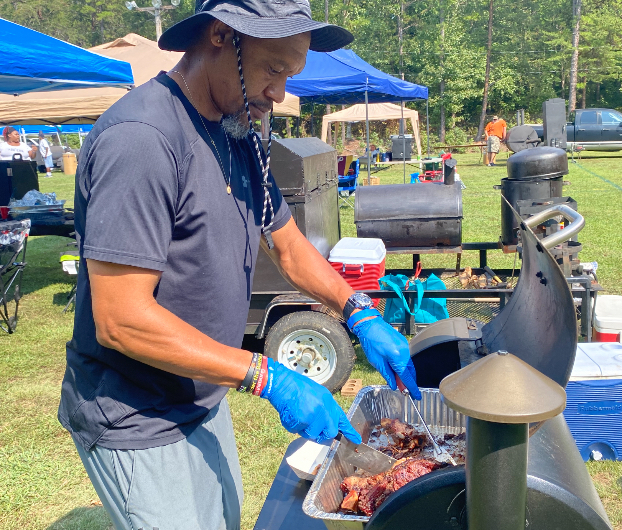 Shaun Westbrook from Badin prepares some of his prime rib roast.

Eric Lee is dedicated to his grilling.

That was evident by the fact that he had been stationed at the E.E. Waddell Community Center’s football field since 3 p.m. Friday, getting ready for the annual grill-off competition on Saturday.

He said the best part is people voting on his food and the “community coming together.” 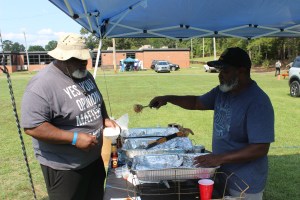 Eric Lee serves a customer some of his pulled pork.

The seven grilling teams that participated prepared two Boston butts, about 34 pounds of chicken and four racks of ribs. They also were allowed to include their own specialties.

This was the sixth time the community center hosted the competition, according to the organizer Dexter Townsend. It had been postponed for the past few years due to the COVID-19 pandemic.

“I think this is one of the better crowds that we have had,” he said, with music blaring in the background. “It’s gradually catching on.”

All the proceeds for the event — it cost $15 to eat — will benefit the Waddell Center. Townsend said the plan is to create a sort of Hall of Fame along the hallways to commemorate the impact of former community leaders and school teachers such as former Kingville School principal Dr. Elbert Edwin “E.E.” Waddell.

“A lot of the younger generation come to the Waddell Center, but they don’t really know who Mr. Waddell was or some of the former school teachers and leaders,” Townsend said.

The grillers competed in food categories such as chicken, ribs, Boston butt and griller’s choice.

Albemarle residents and cousins Archie White and Sissy Griffin competed under the team name Brown Hill Crew. They took home first place in Griller’s Choice for their loaded potato soup and smoked turkey legs with gold sauce, first place in Boston Butt and second place in ribs. They loved getting to meet the other grillers and watching people enjoy their food.

“Just seeing people’s faces light up when they enjoyed our food was awesome,” White said. 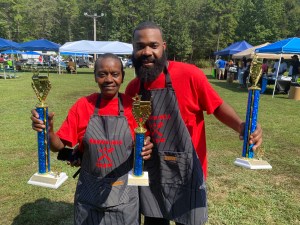 Darrell Blackmon and Shawn Baldwin, known as The Smoking In-Laws, took first place for their ribs. 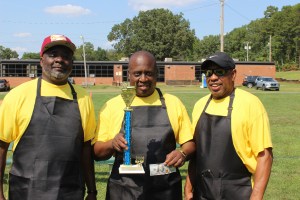 Badin resident Shaun Westbrook, part of the team Country Kitchen Cookers, specialized in prime rib roast and macaroni and cheese. This was his first year competing. His team won second place for its chicken.

“This is awesome, we had a good time,” he said about the experience. “People that think they can grill and cook, they put a lot of heart and energy into it.”

He said his team planned to come back next year and, like Lee, planned to spend the night.

Two of the more notable grillers in the competition were Team Tell It Like It Is, featuring Albemarle Police Chief Jason Bollhorst and Waddell Center director Billy McRae. They won first place for their chicken.

Bollhorst, who made chicken and pork quesadillas, drew inspiration from seeing what all the other grillers were making.

“Just running around checking what everybody else was grilling and seeing what they’re doing gives me ideas,” he said. “I love cooking.”

During a time when so many people are easily divided, this is the type of event, he said, which helps to unite people.

“Who doesn’t love food? And it brings everyone together,” he said. “With the music and the good food and having conversations with people, you forget about all the other stuff that’s going on.” 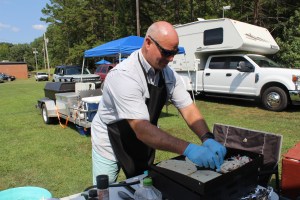