Rhodes was selected following a nationwide search. He brings 28 years of experience at both the local and state levels of government.

Rhodes has served as a development specialist for the City of Mount Airy, town manager of Walnut Cove and senior and chief planner for the North Carolina Department of Commerce. 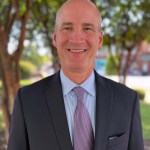 For the past eight years, Rhodes has been the manager of the North Carolina Rural Planning Program, which focuses on economic development, planning services and assistance for cities and towns across North Carolina.

“Darren Rhodes’ skills and experience make him a well-rounded assistant city manager,” Ferris said. “Darren brings to our organization critical knowledge in economic development as well as planning. This specialized background will be a valuable asset to our city, especially as we continue to see historic growth.

The city’s Strategic Plan was a key factor in what interested Rhodes in the position.

“The City of Albemarle is recognized as a community that is well managed and strategic in its approach to service delivery, community, and economic development,” said Rhodes. “Projects such as the Pfeiffer University Center for Health Sciences and the Albemarle Business Center have laid the groundwork for continued success.”

Rhodes earned a Bachelor of Arts Degree as well as a Master of Public Administration Degree from Appalachian State University. Rhodes also has a Certificate in Municipal Government from the North Carolina School of Government.

Rhodes will begin his duties on Oct. 17.