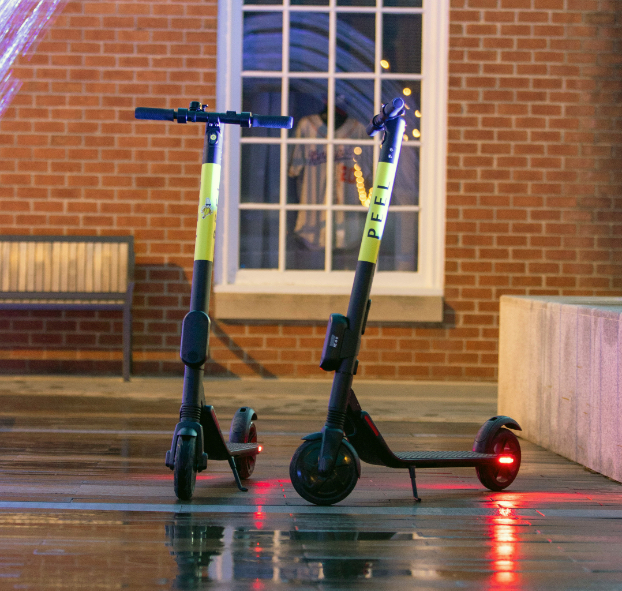 Albemarle city council approved an agreement to allow for a 12 month pilot program between the city and Peel Scooters. Photo courtesy of Alex Zimmermann.

Due to the popularity of the bright-yellow electric scooters in downtown Albemarle, the city council on Monday night unanimously approved a 12-month pilot contract agreement between the city and Peel Scooters, the Kannapolis-based electric micro-mobility vehicle sharing company that introduced the 20 vehicles last month.

The scooters are assigned to certain spots within the downtown area and residents have to pay $1 to unlock the scooter and 30 cents per minute while using.

Riders scan the scooter’s QR code on their phone, taking them to the App Store or Google Play. After a short tutorial and an input of their credit card information, they are off and scooting.

After their use, riders can return the scooters to a specific location or leave them for the company to pick up. Each scooter comes installed with a GPS-monitoring system to continuously track the device’s whereabouts.

After each ride, the company gets a report detailing how long the scooter was used and where it was taken, among other data points. Peel can track the number of average riders at any time and the number of monthly active users.

The company has the ability to temporarily ban users from the vehicles if they ride along the sidewalks. If they continue to operate on the sidewalks, Peel can permanently ban them.

People have to be 16 or older to ride the vehicles and the maximum speed for each vehicle is 15 miles per hour. Helmets are not provided though the company and city encourage people to wear them.

Peel will use hang tags on the scooters and informational pop-ups in the Peel App to educate users on how to properly operate the scooters.

Per the contract, the city assumes no liability for loss or damage to the scooters and also from any injuries sustained by the riders.

The plan is to stick with the 20 scooters, though Zimmermann said the number can be adjusted, provided he first talks with city.

Zimmermann told Council that since the vehicles were brought to Albemarle in late August, there have been 960 rides, with an average ride time of 53 minutes. There have been an average of 26 rides per day.

“It’s been completely beyond what we expected,” Zimmermann said. “It’s actually the industry standards right now.”

He told Council the company hired its first employee on Monday, who lives in the downtown area.

Albemarle is the first full-time municipality the company, which began a year ago, has targeted. It previously sent its vehicles to High Point as part of the city’s annual furniture market.

In an interview a few weeks ago after the scooters were first brought to the city, Zimmermann said the company, which he co-founded with Antonio Knight, wants to target smaller communities in the area, which “can benefit just as much, if not more, from the micro-mobility market.”

At the conclusion of the one-year pilot period, the city and Peel can agree to amend the contract and extend the partnership.