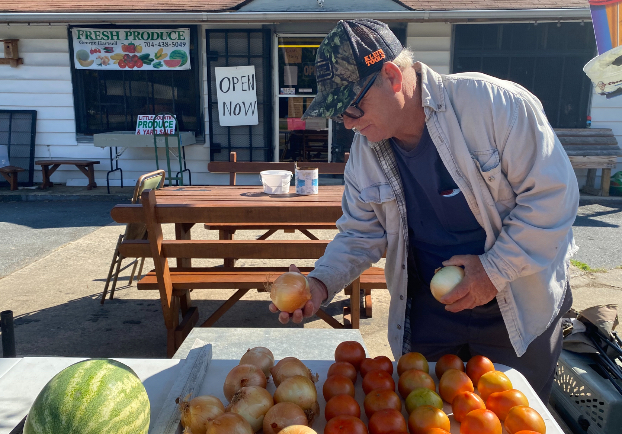 Stanfield native George Hartsell has been selling produce in Locust for the past five years.

When driving south along N.C. Highway 200, it can be easy to miss George Hartsell’s small general store, which specializes in an assortment of fresh produce.

Located at the intersection of North Central Avenue and Bethel Church Road in Locust, the Little Country Produce Store routinely draws in first-time customers, who are often surprised by the mere existence of the business.

“They say, ‘I’ve been by here probably 100 times and I have never known all this was in here,’ ” Hartsell said. “And I tell them, ‘That’s because you never stopped.’ ”

Hartsell, 64, has a farm in Stanfield where he grows many of his crops. He is mostly known for his tomatoes, which he calls his “calling card.” He offers a beefsteak tomato, a meaty, juicy type notable for its large size.

Beyond his standard produce, the store features an eclectic assortment of goods ranging from Brunswick stew and vegetable soup (“every kind of vegetable but the kitchen sink,” he jokes) to homemade salsa and apple butter to a variety of meats, including fatback, sausage, liver mush and country ham. He also sells biscuits, Hoop cheese (a traditional cow’s milk cheese which he says has a taste similar to cheddar), Hershey’s ice cream and even bait and fishing rods. 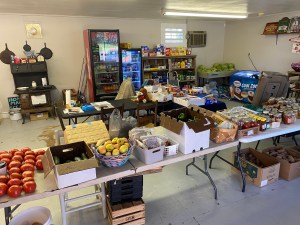 He’s accumulated the goods in his store over many years, based on what his customers are looking for.

“You’ve got to have a variety of stuff,” he said.

Much of his produce comes from Patterson Farms in Rowan County. About once a week, he purchases a truckload of inventory, which he says lasts about two to three weeks. He gets his meat from a meat market in Concord.

Hartsell began selling produce around 2005, when he stationed a trailer along N.C. Highway 200 in Stanfield next to Wayside Family Restaurant. He also began traveling throughout the western part of the state and even into South Carolina.

“I’ve sold produce out of, Monroe, Midland, Charlotte,” he said. “I’ve been all over the place.”

He had previously worked at Whitley Handle, Inc., a manufacturer of wood handles in Midland, for about 15 years, before spending some time in construction, specifically working with heavy equipment. He slowed down after being diagnosed with several types of cancer.

“So I had to find something to do,” said Hartsell, who is currently cancer free, which led him to purchasing a produce trailer and building one of his own.

About five years ago, after finding success in Stanfield and tired of traveling the state, Hartsell moved into his first brick-and-mortar location along North Central Avenue. He rents the building, which was previously a gas station and pawn shop, from a company in Concord.

Aside from shutting his business down for about four months because of the pandemic, Little Country Produce stays open year-round. Hartsell has benefited with the recent uptick of new families moving into the western part of the county, especially older residents. 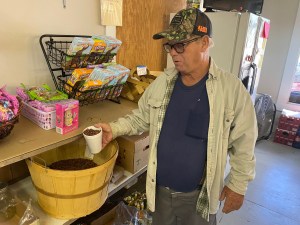 George Hartsell with a cup full of butter beans.

He believes his prices give him an advantage over bigger retailers.

“I try to keep my stuff down at a reasonable price,” he said. “I try and look out for the little man.”

What has kept him going over the years, whether it’s been selling produce at his store or on the road, has been his interactions with his customers.

“I really love being around other people and meeting people and I love taking care of what they need,” he said.

The store is open noon to 6 p.m. Monday and Tuesday and 10 a.m. to 6 p.m. Wednesday through Saturday.