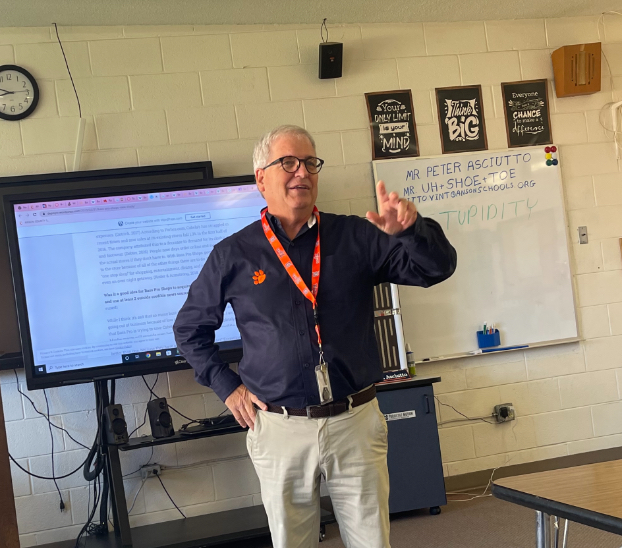 Peter Asciutto has enjoyed getting to know his students during his first few weeks at Anson. (Contributed)

At 63, when most people are looking towards retirement, Peter Asciutto decided to leave his prosperous downtown Albemarle business and pursue a second act.

In handing over Vac & Dash, which he founded in 2004, to a new owner this summer, he began pursuing a long-held passion that he had considered in the past but never truly explored: teaching.

When he was in school at South Florida Junior College and later at Troy State University in Alabama, his initial plan was to become an educator. Aside from some stints as a substitute teacher in the 1980s, it was a dream deferred.

But that changed a few weeks ago.

After a week’s training for new teachers in mid-August, he began his new career as a CTE instructor at Anson High School in Wadesboro last month. He teaches two classes, a course on business essentials and one on marketing — rather appropriate for an individual who had a knack for promoting all things Vac & Dash on his social media platforms.

He did not apply for a position within Stanly County Schools because he wanted to avoid any potential conflicts of interest with his role as a county commissioner.

Though he’s only a few weeks into the profession, Asciutto said he’s enjoyed getting to know and connect with his students. He’s got about 80 in three classes.

“With teaching, it’s given me the opportunity to achieve a goal that I’ve wanted to do ever since I was a kid,” he said.

While he admits it has taken some time learning how to create lessons plans and navigate Canvas, the school’s learning management system, he has enjoyed getting to know his students and tailoring his plans around their interests. He has even incorporated his own experiences of creatively marketing his former business into his curriculum.

“Overall, the kids have been really good,” he said. “I’m just trying to convey that I care.”

With each class lasting 90 minutes, Asciutto has been figuring out the best way to make use of the time and restrict how much he is speaking.

“It’s not difficult for me to talk for an hour and a half, but it is difficult for those kids to listen to me for that time,” he said.

He’s also received advice from his son, Greg, who is an English instructor at Garinger High School in Charlotte.

Asciutto had his students research the growing popularity of Bass Pro Shop hats after he noticed many of his students wearing them. He also wants them to learn about the hair-weaving and hair extensions businesses.

After talking to his students about how schools operate like businesses, his classes have been working to come up with names for Anson’s cafeteria as a branding exercise.

“So we did a thing where people came up with names and then the classes voted on them and we narrowed them down to about six names,” he said. “And we gave it to the cafeteria folks to vote on the two that they like.”

His classes will then work with the graphic arts department to create a logo. Asciutto will print T-shirts and give them to the cafeteria workers.

Asciutto has also discovered a new rhythm in life as a school teacher. He wakes up and runs at around 4 a.m. before getting to school at 6:45 a.m.; he eats with his students at the cafeteria, where he enjoys double cheeseburgers and spaghetti; and he often stops at Zilla Pizza, a relatively new restaurant along U.S. Highway 52 in Ansonville, on his drive home.

Referring to him as an “excellent teacher,” senior Hannah Bolick was impressed with his ability to “pick up on trends that students are doing/wearing, and incorporating it into our lessons.” This helps to make learning “more fun and relatable to us students.”

Changing professions has also provided Asciutto with more clarity of mind. When he was owner at Vac & Dash, he had to-do lists that seemed to never end.

“What I love about it is my mind is more clear and more focused now,” he said.