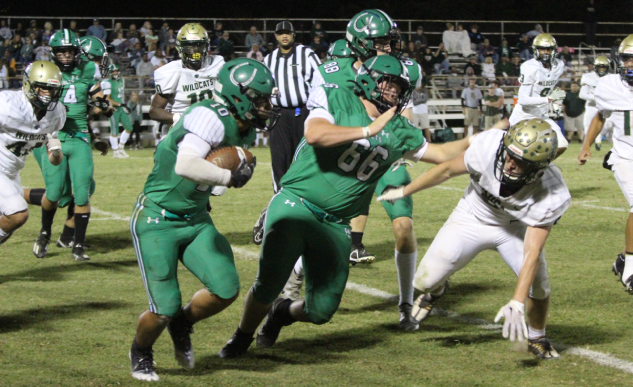 West Stanly running back Rene Salazar gets a block from offensive lineman Owen Grismer (No. 66) in Friday's home game versus Eastern Randolph. (Photo by Charles Curcio/staff)

One high school varsity program which no team from Stanly County has beaten comes from nearby Randolph County.

The Eastern Randolph Wildcats entered Friday’s game at West Stanly with an unblemished record versus the four Stanly programs, including wins versus South in 2015 and 2016 and Albemarle in 2017 and 2018.

West had several long drives but turned the ball over twice, which both led to points in a 42-0 loss to the Wildcats.

The Colts (3-3) allowed 415 net yards of offense to the Wildcats (4-1). Eastern Randolph averaged 9.6 yards per play. Wildcats quarterback Stratton Barwick was 12-of-17 through the air for 167 yards and one touchdown with one interception.

Eastern Randolph netted 248 yards on 25 carries with five rushing touchdowns. Ervodd Cassady led the efforts for the visitors with 106 yards on 12 carries with two TDs. The Wildcats scored on six of the team’s seven offensive possessions.

West drove to inside the red zone in the first quarter, but a pass into the end zone was picked off. The Colts also fumbled in the fourth quarter in the team’s end zone, giving up a safety.

The Colts had 129 net yards of offense, 122 coming on the ground on 39 carries for an average of 3.1 yards per carry. Shane Mecimore led West with 49 net yards on 13 carries.

West’s defense forced one turnover when Kreed Osborne picked off a Wildcat pass at the West one-yard line.

West honored some of last season’s state champions from the school at halftime, including the three-time 2A softball state champions by presenting the players with their championship rings. Natalie Almond and James Shue, who respectively won outdoor and indoor track individual titles, were also recognized.

The Colts will have a bye week this Friday and return to the gridiron Oct. 7 at home against Parkwood to open conference play.