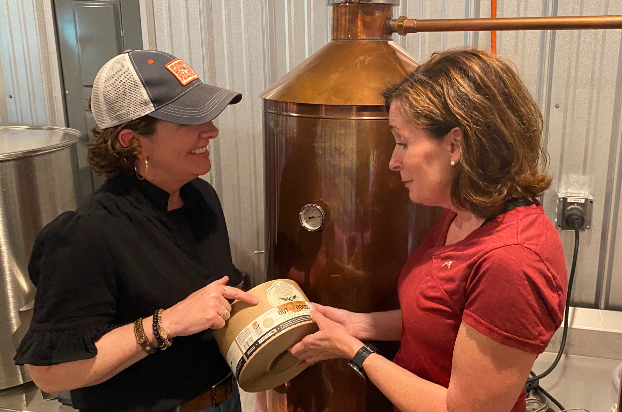 Michele Goodwin with her sister Maria Harrell are excited about opening the county's first distillery.

Maria Harrell was on her family’s farm in Albemarle several years ago when she saw something she’d never seen before: Amidst a group of crows, one stood out because of its unusual walk.

The bird reminded her of a horse with its long, leisurely movements.

“As I was watching him, I said to my husband, ‘Look at that crow, that crow is loping because of its gait,'” she said.

Using the crow as a source of inspiration, Harrell, along with her sister Michele Goodwin and their father Tony Dennis, are preparing to open their first distillery, as a way to honor their family’s history producing spirits, including whiskey and brandy.

Loping Crow Distillery is set to open in late October or early November. It is located on the Dennis family farm on Endy Road, across from Dennis Vineyards, which Tony’s brother owns.

“It combines our passion for horses with our business, and the crows that have their way with this place,” Harrell said.

The opening will also be historic as Loping Crow will be Stanly County’s first distillery. 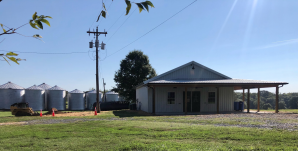 The distillery is located on the Dennis family farm, with grain bins behind it. Photo courtesy of Michele Goodwin.

The business will offer a nod to the history of distilled spirits in Stanly, especially the western part of the county, which Harrell said dates back for at least the past 100 years. And Harrell’s family has been a big part of that history.

Spirits had been made on the family’s farm over the years, including by Lonnie Lambert, a soldier on the frontlines during World War II who was Harrell and Goodwin’s maternal grandfather. The sisters still have a bottle of his peach brandy.

The decision to open the distillery, which will include a tasting room where patrons can enjoy a small sampling of cocktails, took years of deliberate planning and was not made lightly.

Loping Crow will feature five spirits: “Out Of The Woods” white whiskey, which was “the recipe that started it all,” according to the website; “Scout 74” bourbon whiskey, a favorite of the sister’s fraternal grandfather Silas Dennis; “Homestead” brandy, featuring grapes from local vineyards; “Two Sisters” vodka, a favorite of Goodwin’s who is not a fan of brandy; and “Lemonshine” white whiskey with natural lemon flavors, which is “the perfect drink to celebrate nothing and everything!”

The family’s corn whiskey will be the foundation for each of the drinks, aside from the brandy. When distilling the spirits, the family used Lonnie Lambert’s white whiskey and peach brandy as their benchmark.

While additional spirits made be introduced seasonally, there is no plan to expand past the five drinks.

“We aren’t serving anything that we don’t like,” Harrell said.

The recipes for the spirits have been passed down from each generation. Though Tony Dennis did not make drinks himself, he was around others who taught him the process. He in turn as taught his daughters, who are the fifth generation to grow up on the farm.

To better understand how liquor is made, the sisters took copious notes and filmed their father as he explained to them the intricate process.

“I want to know how to set everything up and I want to do it right” Goodwin said, noting both she and her sister hope to someday pass the liquor-making tradition to their children. “This is an art and I don’t want to miss a beat.”

Every part of the business, from the drinks to the brick-and-mortar location, have been put together an eye toward meaningful details. The vintage windows dividing the tasting room and the production room, for example, are from the home of Harrell and Goodwin’s great-grandfather.

Due to so many individuals being arrested over the years for illegally making liquor, including moonshine, spirits can still be viewed in a negative light, especially when compared with wine or beer. The sisters hope to help break this long-held stigma.

With not as many people making liquor as they did in the past–the sisters refer to it as a dying art–the family is looking forward to continuing the process, both as a way to serve the public and to honor their forebears.

“There’s a joy and a pride in being able to take something that your family has done and continue it,” Harrell said. “You feel like you have generations behind you pushing you forward.”

With the new business, the sisters are excited patrons will no longer have to leave the county in search of good liquor. The closest existing distillery is Southern Grace Distilleries in Mt. Pleasant. There are currently about 80 distilleries across the state.

“It makes me feel like our community is really growing,” Goodwin said.

Word has quickly spread about the new business, which has excited the family.

“Everybody has been so supportive,” Harrell said.

While there are not yet any set hours of operation, the distillery will likely be open on the weekends, and will include corn hole and live music.

“We feel like we are a destination because we purposely come here every day because we’re happy to be here and we think everyone else will be too,” Harrell said.