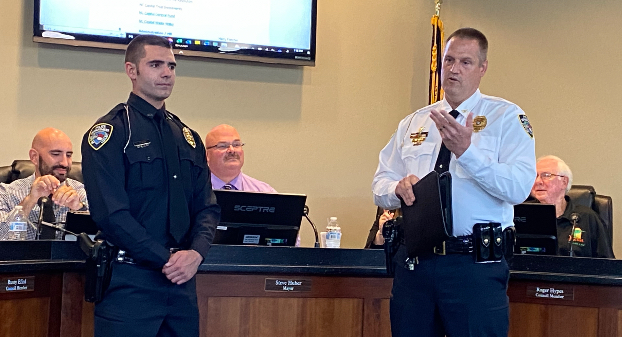 It was an historic moment for Adam Hartsell when he was sworn in as a Locust police officer in July.

The job was his first time around Locust officers as a colleague, but Hartsell grew up around the city’s officers, with the department almost a second home.

For Hartsell, being a police officer is all about family.

His father is former police chief Frank Hartsell, who retired in 2019 after nearly 30 years on the force.

“Locust has just always spoke with me and with my Dad working here his whole career, that’s one of the big things that drew me to this place,” Adam said.

Dating back to career day in the eighth grade, when Adam participated in a ride-a-long with several officers, he said he always thought he wanted to become a police officer. He spent about six years after high school working various manufacturing jobs, including the Corning plant in Midland and Charlotte Pipe and Foundry, seriously thought about joining the military before the calling to enter law enforcement grew again.

Last summer, he called his father, the firearms instructor for the department and a reserve officer who advised and helped connect him with various former officers, including Locust council member Mike Haigler, who served as police chief before Frank.

Once in basic law enforcement training (BLET), Adam realized he made the right decision to follow in his father’s footsteps. His outstanding performance during BLET earned him the Damon Smith Memorial Award, given to the top overall candidate of each class.

“I was fortunate enough that they, for some reason, cast me as one of their class leaders,” he said.

Having been employed since March after BLET graduation, last month’s swearing-in ceremony made it official.

“We were absolutely elated,” Frank said about what the ceremony meant to himself and his wife, Tonya. “We’re obviously very proud parents. Adam is a very intelligent and driven young man.”

As a child, Adam helped out at the firearm range, where officers learned from his father proper firearm technique to earn their qualifications. Many of those same officers are now Adam’s colleagues.

“I think it’s pretty cool,” he said, estimating at least five officers who served alongside Frank are still on the force.

One of those is Chief Shew, who Frank helped hire more than a decade ago.

“I always say that I owe a tremendous amount of my career to Frank Hartsell,” Shew said.

He added that Frank was always a relatable and intelligent officer and with Adam, “the apple doesn’t fall far from the tree.”

Shew introduced the new patrol officer to the city council during its July meeting.

“To have you here and be a part of this department is just so beyond wonderful,” said Mayor Steve Huber, himself a former officer with Charlotte-Mecklenburg Police. “I know you’re going to do your Dad proud and the City of Locust proud and we can’t wait to see what you accomplish in the next few years.”

It has taken time for Adam to understand the necessary ins and outs of the job, but he said he enjoys learning and coming to work each day. He especially likes interacting with the public, many of whom see the name on his badge and remember the little boy who used to tag along with his father.

“Going into the stores, sometimes they’ll be like, ‘I know you, you’re Frank’s boy,’ ” he said.

Adam said he has many career goals, but for now, “I want to be the best officer I can be and help the people of this city the best that I can.”

Frank said he is confident his son will become a great officer and make his own contributions to the city.

“He doesn’t have anything to live up to because he’s already lived up to being a police officer in itself, and to me that’s one of the main reasons we’re so proud of him,” Frank said.

Adam said he is proud of the longstanding legacy his father cultivated during his time with the department and looks forward to creating his own.

“My dad left a huge footprint in this city and by no means do I feel like I have any shoes to fill, but it’s great to have a role model I can look up,” Adam said. “To me, he was always a role model growing up and to me, he still is one.”