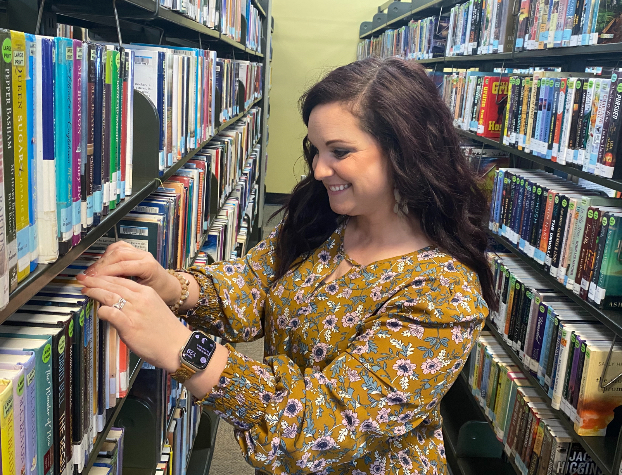 After eight years working at the Stanly County Public Library, including the past six and a half as the children’s librarian at the Albemarle branch, Sara Hahn is looking forward to her next role, which she says has always been her career goal.

Hahn was informed last Friday by County Manager Andy Lucas that she would be taking over as director of the library. Director Melanie Holles left in August for the same position in Cabarrus County.

“It was sooner than I expected, but a wonderful surprise,” Hahn said of her promotion.

Her first day as director will be Oct. 17. She will continue to serve as the children’s librarian until a replacement is found.

“The County interviewed several candidates, but Sara emerged from the field due to her passion for enhancing library services, vision for the future, demonstrated grant writing ability and proven leadership qualities,” Andy Lucas said in a press release.

“Just having that community support and support within the building and from the staff and from our boards has just really been humbling and encouraging and amazing,” Hahn said.

Hahn credits much of her passion for libraries and young children to an experience she had while attending N.C. State University. While on campus, Hahn served as a nanny for two families, each of whom had three children, including triplets.

Hahn had a bumper sticker at the time which read: “Nanny for triplets, I nap at red lights.”

In between her busy schedule, she was majoring in applied sociology with a minor in animal science, Hahn enjoyed taking the children to the Wake County public library system, where they completed their homework, and the Marbles Kids Museum in downtown Raleigh.

Her initial plan was to become a veterinary technologist, but after college she soon realized she wanted a more stable job with retirement and benefits. It was around this time she saw the position for children’s assistant librarian in Albemarle and it all started to click.

“I thought, ‘Well, I love kids. I love to read. I love literature and I’m very passionate about that…so I’ll give that a try,’ ” she said.

During her tenure as children’s librarian, she helped modernize the children’s section, including bringing in local artists for the murals, organized the annual summer reading program and regularly hosted Bouncing Babies Story Time each Thursday at 11 a.m. for children 2 and younger.

“The children’s section is the building block and the foundation of library users in our community,” she said.

For Hahn, the library has always represented a place where all people, regardless of background, are equal and can feel welcomed.

“It doesn’t matter who you are or what you have or don’t have, everyone is the same here,” she said.

It was during her time as children’s librarian that Hahn, who has lived in Stanly County since she was a small child, decided she wanted to spend the rest of her career in the county.

Now that she is about to achieve her goal of becoming director, Hahn has afforded herself the chance to imagine what the library could eventually become. She has talked with Lucas about creating individual study rooms equipped with microphones and webcams and she also wants to improve the aesthetics of some of the smaller branches.

It is her dream that some day, the current Albemarle branch could be turned into an interactive children’s museum, which would help fill a void within the downtown for young families with kids. It would be similar to the Marbles Kids Museum or Discovery Place Kids in Huntersville.

As a mom of an infant daughter, creating a space for children to play and unleash their imagination is incredibly important for Hahn.

“As someone who lives here and is raising a family here, I think that we need more for families to engage in for educational, interactive play,” she said.

Hahn is excited not just about her new role but how the library system can best serve the public in the years to come.

“I think there’s just really a lot of potential to see what we can become and staying relevant is really important to me,” she said.