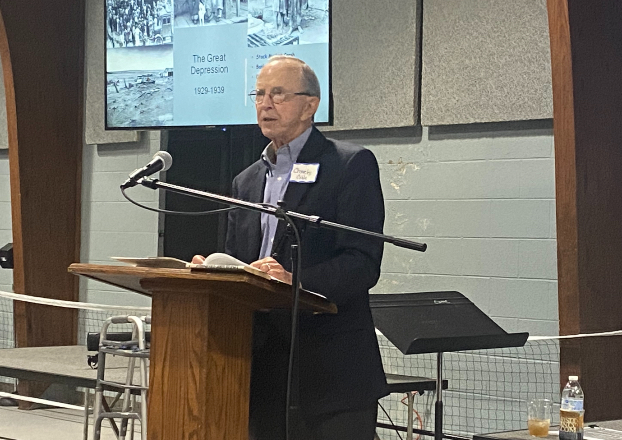 Close to 80 years ago, an Oakboro man had a front row seat to two of the most consequential moments in American history. Warren Coble flew on companion flights during the atomic bomb missions over Hiroshima and Nagasaki in August 1945.

As part of the Stanly County Historical Society’s annual member appreciation banquet, held Thursday night at Central United Methodist Church in downtown Albemarle, keynote speaker and Oakboro native Dr. Charles Coble presented recollections of his uncle’s account of the secretive mission that brought World War II to an end as told at a family Christmas gathering in the early 1950s. 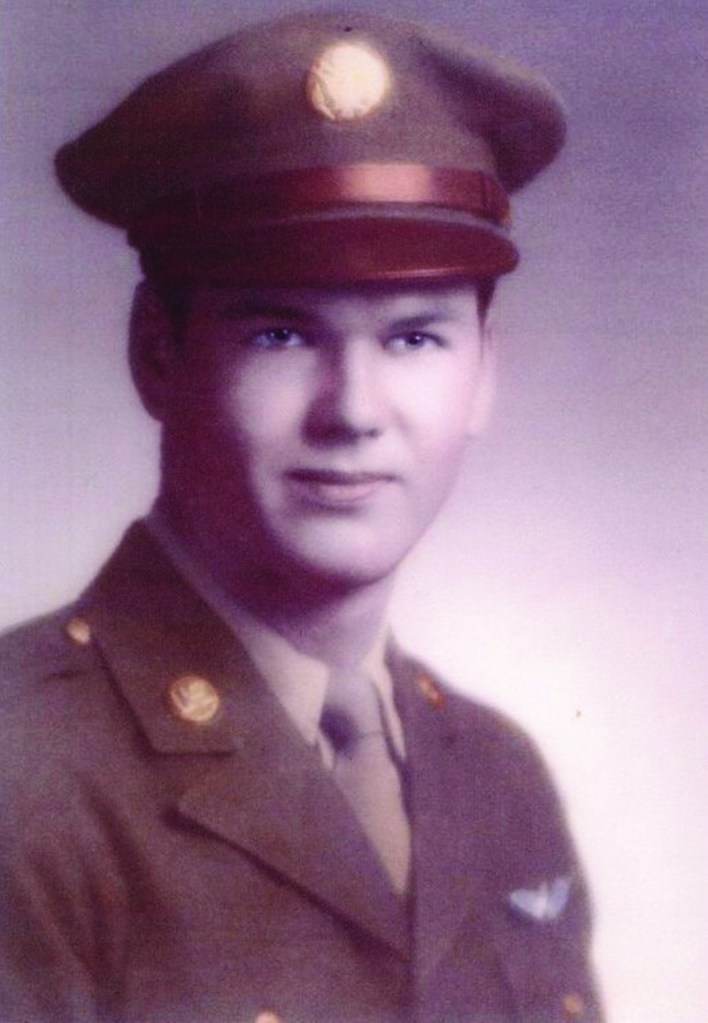 Like so many young people in the 1940s, the trajectory of Warren Coble’s life forever changed once Pearl Harbor was attacked on Dec. 7, 1941 and the United States formally entered the war.

As a member of the United States Army Air Force, Coble completed basic training at Camp Croft in South Carolina before receiving in-depth training about radio operation at the Radio School at Scott Field, an Army training camp in Illinois.

The soldiers who received training at Scott Field “became known as the eyes and ears of the Army Air Force,” Charles Coble said.

Once he completed his training at Scott Field, Warren Coble became a member of the 393rd Bomb Squadron, which was the only United States Army Air Force squadron trained for nuclear warfare during World War II.

Originally, the 393rd was equipped with B-17s, however, fate intervened when Col. Paul W. Tibbets Jr. selected the new unit to participate in a highly secretive mission. In September 1944, the squadron moved to Wendover Field, Utah, and began training on the massive B-29.

In December 1944, the 393rd Bomb Squadron was reassigned to the new 509th Composite Group, led by Tibbets. It was tasked with the operational deployment of nuclear weapons.

Tibbets told the flight crews that they were about to embark on a mission “that could possibly bring the war to an earlier close,” Charles Coble said. In stressing the importance of keeping the mission a secret, Tibbets told the men that whatever they heard had to stay with them.

The 509th Composite Group was comprised of more than 1,700 enlisted men, including Sgt. Warren Coble, almost all of whom deployed to Tinian, an island in the northern Marianas within striking distance of Japan, in May and June 1945.

Coble’s rendezvous with history began Aug. 6, 1945, when he served as the radio operator on Necessary Evil, a Boeing B-29 Superfortress that participated in the bombing of Hiroshima. It was used as a camera plane to photograph the explosion after the Enola Gay, piloted by Tibbets, dropped the atomic bomb, code-named “Little Boy.”

“My first reaction was one of being awe-struck and astonished,” wrote Capt. James W. Strudwick, the bombardier on the plane, on seeing the explosion, according to Charles Coble. “I was not prepared for the scene in front of me. It literally took my breath away. I could not take my eyes from the site.”

Sgt. Warren Coble was again the radio operator during the Nagasaki bombing three days later, only he was on another plane. This time he was on the Enola Gay, which participated in the second nuclear attack as the weather reconnaissance aircraft. The original target was Kokura, but due to the city being obscured by smoke, the bomb, code-named “Fat Man,” was instead dropped on Nagasaki by the B-29 Bockscar.

The United States had no more atomic bombs at its disposal, so had Japan not surrendered, both countries would have resumed conventional warfare, Coble told the audience, and thousands of more troops would have died. Fortunately, Japan surrendered within days after Nagasaki was bombed.

After the war, Coble, who received his law degree from Wake Forest College, became an attorney in Albemarle with the firm Coble, Morton, and Grigg, Attorneys at Law. He died in 2004.