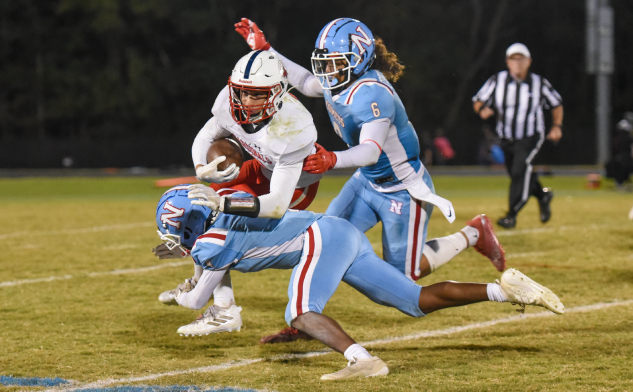 North Stanly took to the field at R.N. Jeffery Stadium for a game for the first time in two weeks Thursday night, hosting Union Academy in the conference opener.

North survived early turnovers and a sluggish first half offensively by turning out 22 points in a three-minute span in the third quarter en route to a 28-12 win over the Cardinals.

The Comets (4-2, 1-0) turned the ball over with an interception, but the North defense forced a short punt after a three-and-out.

Comets running back Cam Smith scored the opening touchdown of the game giving North a 6-0 lead near the end of the first quarter. The North running back set up the score with a punt return down to the Cardinal nine-yard line. Smith finished with 186 net rushing yards on 24 carries, averaging 7.8 yard per carry.

Penalties kept North from scoring in the second quarter and hampered the Comets the entire game. North had 17 penalties for 177 yards, while Union Academy committed 11 penalties for 85 yards.

After the Comets turned the ball over on downs with 3:18 to play, the Cardinals (1-6, 0-1) drove 87 yards in eight plays, scoring with just under six seconds left on a 31-yard pass from Patrick Miller to C.J. Harvey.

The touchdown from the visitors spurred the Comets into action. Smith ripped off two long runs and Loquis “Juice” Lilly scored a 15-yard touchdown run up the middle, which tied the game 12-12.

After a three-and-out for the Cardinals, North took the lead on a short field, going 42 yards in six plays. Quarterback Chance Blake, who finished with 171 passing yards, going 11-for-23, found Gavyn Covington wide open in the back of the end zone. A two-point conversion put North up 20-12.

On the ensuing kickoff, Union Academy fumbled at the Cardinal 28-yard line. Quinton Harris picked up the loose ball and returned it for a touchdown. Another two-point conversion gave North its final margin of victory, 28-12.

D.J. Watkins and the pass rush of the Comets forced several hurried throws by Miller. The Union Academy QB was 9-for-30 for 149 yards but threw two interceptions, both picked off by North’s Jordan Stewart.

“We really didn’t think it was going to be tied at halftime,” Stewart said. “At halftime, our coaches got on our butts. We came out here and showed what we can do.”

“Coming out in the first half, we were sloppy. We had a dominant mindset coming in, but no energy,” Blake said.

Smith agreed, saying “everybody came out with the wrong mentality, really, with the energy of ‘We’re going to win.’ ”

Scott Crisco, earning his 58th win as the Comets’ head coach, said “we just weren’t in it offensively. Defense played well the first half, but (they) were on the field way too much. At halftime, we lit into it pretty hard and they responded in the second half.”

Crisco credited the pass rush for North, saying it probably caused the second interception for the Cardinals.

“We’ve just got to go in there focused. We can’t play like we did the first half or the whole game,” Blake said.

Smith added the team “has a lot of potential. But when we get into practice, everybody has to practice like they want to play.”

Coach Crisco said he hopes Thursday’s efforts will be a wake up call similar to the loss at North Rowan, which energized the Comets to win one-possession games against county rival West Stanly and a road win at Randleman.

“Next week is going to be a tough one. I told the team that every game now is for a conference championship.”