The Stanly County School Board voted Tuesday to start classes in early August next year, going against the state’s school calendar law.

The board in February approved a resolution requesting the N.C. General Assembly amend its school calendar law to provide local school boards with more flexibility when it comes to determining their own start and end days.

Angela Wood, assistant superintendent for human resources, presented the board with two draft options for the 2023-2024 school year: an early start calendar and a traditional one, which were developed by the calendar committee.

With the early start option, the first day of school will be Aug. 9, 2023, 20 days earlier than when students started school this year. The start date for staff will be Aug. 2.

The first semester will end Dec. 15, 2023, meaning students will have taken final exams before going on winter break. One of the biggest criticisms about starting school in late August has been that students have to take first-semester exams after winter break.

The last day of school will be May 22, 2024, several weeks earlier than usual. The final day for students this academic year is June 9, 2023.

The proposed traditional calendar would have looked similar to calendars in the past. School would start on Aug. 28, 2023, the first semester would end Jan. 29, 2024, and the final day would be June 7, 2024. 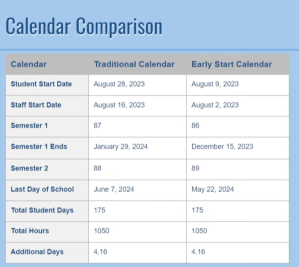 Presentation by Angela Wood comparing the early calendar and traditional calendar options for next year.

The Early College calendar has not been developed.

Following a motion by board chairwoman Glenda Gibson to adopt the early calendar option, it was seconded and unanimously approved.

Board member Anthony Graves in closing comments spoke about the benefits the new calendar would provide for students and teachers.

“It has a direct impact on students’ ability to pass the tests, but more importantly it gives teachers the ability to teach without having to do extra work after the Christmas break to make sure that these kids are going to be able to score well,” he said, noting the state calendar law has been an “unfair barrier” that has been placed on kids in Stanly and across the state.

Many districts across the state have already approved starting school earlier while many others are still discussing the option. Cabarrus County Schools last month voted to begin classes in early August.

During its March meeting, the school board approved letting Superintendent Dr. Jarrod Dennis and the district’s calendar committee develop an early start calendar.

“We’re trying to address learning loss in our county and we’re trying to do the best that we can,” Gibson said at the time about the need to start the school year earlier.