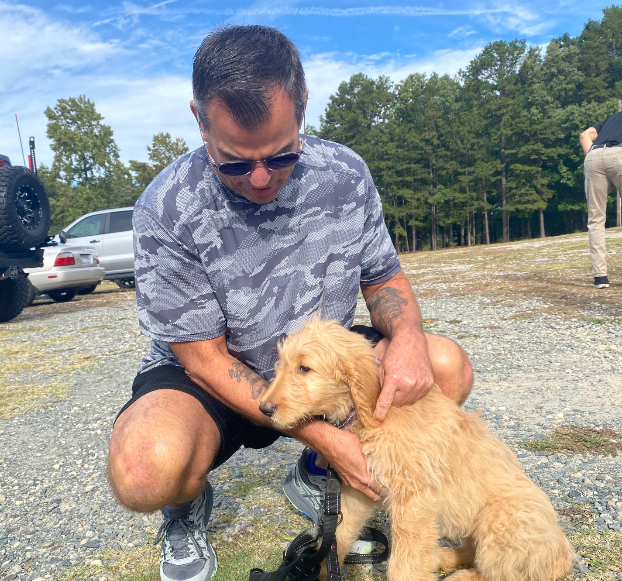 Terry Lewis gets anxious whenever he is around large crowds, especially when he is in a line and people are behind him. Even something as simple as going to the grocery store can become a problem if too many people are inside.

As a U.S. Army veteran, Lewis served overseas as part of Operation Desert Storm in the early 1990s. As a result, the Richfield resident, like many others who served in the military, suffers from post-traumatic stress disorder (PTSD) and little things, such as fireworks or other loud noises, can set him off.

That’s why it was so important for him to have a service dog, which could help alleviate his anxieties and calm him whenever things got out of hand. He already owns a dog, but like him the canine is quite skittish.

After not finding immediate success with the group K9s For Warriors — Lewis got approved but his first class would not be until October 2026, he looked for other ways to find a service dog. He got in contact with Bo Almond, Stanly County’s veteran services officer, who gave him contact information for Carolina Legacy K9, an Asheboro-based business that works to pair service dogs with veterans in the area.

Lewis was recently introduced to his service dog, a goldendoodle named Bella, at Richfield Park. Bella’s official training will begin near the end of the month.

She will be his safety blanket when he is in uncomfortable situations and will help calm him whenever he has panic attacks or nightmares. Bella will fly with Lewis when he travels, including going to California to see his children.

“It’s just really about getting your life back and doing things you normally wouldn’t do,” Lewis said.

Terri Wilson, founder and owner of Carolina Legacy, knows all too well the importance service dogs can play in helping veterans like Lewis cope with adjusting to everyday civilian life.

As someone who served several months in Afghanistan as part of the Air Force, Wilson, who trained dogs before her military service, got a Rottweiler upon coming home, which has been a blessing in her life.

“I saw how much he actually helped me physically and mentally,” she said.

Following an intensive six-month master training at Highland Canine Training in Statesville in 2020, Wilson opened her business at the end of the year. She also works with police officers and emergency medical technicians.

Wilson, who grew up in Stanly, can also train dogs to assist children with a range of disabilities, including those on the autism spectrum. Her 6-year-old son is disabled and she trained a service dog to help him.

“I just really have a passion for service dogs because I know how much it helped me,” she said.

Since starting Carolina Legacy, Wilson has helped 11 veterans and first responders get paired with service dogs, including several German shepherds.

The service dogs provide support to the veterans through tasks tailored to their needs. The dogs can interrupt stemming behaviors, provide deep pressure therapy, and serve as a tether or lead for the veteran when out in public.

Once the dogs get to know their owners, she said they quickly become adapt at reading them and understanding when they are becoming anxious and need attention.

“It basically brings them back to knowing that you’re not alone in any situation,” Wilson said.

Almond is thankful for the service dogs who have already helped improve the lives of local veterans.

“Once that bond is made and they start really working together, it really makes a huge difference,” he said.

For many veterans, the dogs act as their shadow, never leaving their side.

Luke, a 5-and-a-half month-old German shepherd, follows Kevin Nail wherever he goes, helping to keep him calm and reduce his stress. 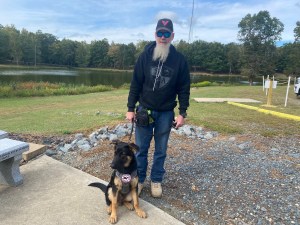 Animal rescue groups typically donate puppies to Carolina Legacy, which are easier to train than older dogs. Wilson then decides which canines would best fit with the veterans that have applied.

Veterans spend about a month getting to know their dogs before the training, which can last anywhere from six months to a year. Group trainings typically take place every other week at Richfield Park.

“I want them to bond and the dog to look at them like, ‘This is my person,’ ” before the training begins, Wilson said.

The county’s Veterans Service Council pays for the training equipment, including vests and harnesses, along with having the dogs properly vaccinated and spayed and neutered. The group recently presented Wilson with a $2,370 check to cover the costs of several German shepherds that were paired with veterans. Wilson wants to eventually convert Carolina Legacy into a nonprofit so she can apply for grants.

“We’re always on the lookout for more dogs because there’s always veterans in need,” Wilson said. 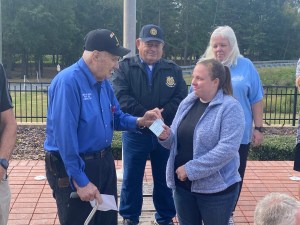