Lineworkers like Oakboro’s Chris Aycock have remained busy during pandemic 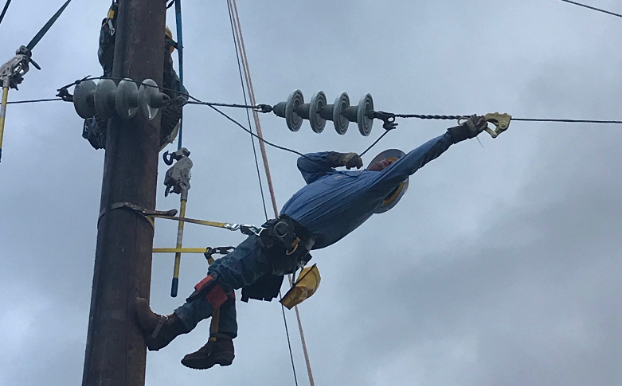 Chris Aycock has been a lineman with Duke Energy for the last four years. Photo courtesy of Chris Aycock.

Even as many businesses reduced their workforce or dramatically reinvented how they operated during the COVID-19 pandemic, one career field never experienced a slowdown — electric utility work. Perched high atop bucket trucks, methodically working to repair power lines or transformers, lineworkers continued to make the necessary repairs to electrical power distribution systems damaged from severe weather.

“If anything we’ve gotten busier because everybody’s been at home, everybody’s using more power,” said Oakboro resident Chris Aycock, a line worker with close to 10 years experience who works for Duke Energy.

A Duke spokesperson said the company has seen a 53 percent increase in line workers being hired since the pandemic.

As the country works to improve the reliability and resiliency of its sprawling electrical grid, line workers like Aycock, 33, are watching over the grid to make sure it’s running properly.

When a line is down or a transformer is busted following a severe storm, causing widespread power outages, there’s no one more critical in that moment than the line workers. But as valued they are, many people still know little about their work.

“Most of the people appreciate what we’re doing, but nobody knows exactly what we do and how we do it,” Aycock said.

Getting into the profession

Like many people, Aycock, who helped build houses with his family, had little knowledge of the line working profession — but it always fascinated him.

“I started paying attention more to a lot of these guys riding around in all of these bucket trucks and everywhere I’d go, I’d watch them,” he said. “It intrigued me about what they were doing.”

Aycock began looking into the profession about a decade ago and found that in many ways, line working was just another type of construction, except one that paid a lot more. While he said he made minimum wage working in construction, the median annual income for line workers is about $73,000, according to Stanly Community College.

“I knew it was construction and if it was construction, I knew that’s what I wanted to do because I don’t like to be inside an office,” he said. “I like being outside — whether it’s rain, sleet, snow — and I like working with my hands.”

Once decided on his new career path, Aycock enrolled in Stanly Community College’s electrical lineworker training program, which taught him the basics of the job such as the ins and outs of electrical line construction, safety codes and the PPE equipment required and how to properly climb the poles and deal with real-life scenarios such as a tree falling on a power line.

The program, which lasts 12 weeks with students accruing a minimum of 350 hours, has been a valuable resource for Duke, which often hires many of the graduates.

“They are the closest such program to the Charlotte metro area,” said Logan Kureczka, Duke Energy communications consultant. “We recruit directly out of these community college programs – and many programs offer state or local funding to cover some or all tuition costs.”

Upon his leaving the program, Aycock began work as a contractor for Pike Electric, but he eventually made his way over to Duke. He’s been with the company for about four years.

Career as a Duke lineman

After many years in the profession, Aycock, who works out of Charlotte, has advanced to the lofty position of a Class A lineman, also known as a journeyman lineman, meaning he can work a variety of assignments, such as repairing a basic utility pole by himself. He also spends a lot of time training groundmen starting out in the field. He also enjoys taking part in the annual lineman rodeo to show off his skills.

What keeps the job interesting is that each assignment is unique and involves its own set of challenges.

“Every day is different and every situation is different,” Aycock said. “We can have two nearly identical poles and if they break, they’re going to break in different ways so you can’t treat them the same.”

The constant problem-solving and troubleshooting is what excites Aycock.

“It definitely keeps you on your toes and keeps your mind going at all times,” he said.

Since much of his job focuses on responding to incidents like downed power lines and broken utility poles following severe storms, Aycock constantly eyes the weather forecast, mentally preparing for inclement weather, which likely means longer days for him and his colleagues. It’s not unusual for Aycock to work more than 24 hours at a time, often accruing more than 100 hours of overtime in a given week.

And when he’s working to restore power to a certain household or neighborhood, the task is often a lot more complex and difficult than people realize, especially when taking into consideration the numerous safety precautions linemen have to complete, which can take hours.

“A lot of people think that when storms come by, that we go around and we just flip switches and the power comes back on,” he said.

Though he can work long hours, Aycock’s job at Duke also affords him the chance for extensive travel, both across the state and country following the aftermath of major storms or hurricanes. He’s been to Florida, Louisiana and a few years ago he spent about three months in Puerto Rico.

More than 1,400 miles away from his wife and kids, he initially accepted the job to go to the island for the pay, but quickly realized just how much his work meant to the local people.

“As soon as we started working and we started seeing these people and how grateful they were that we were there, it kind of changed my whole perspective of why I was over there,” he said. “It made all of us feel really, really good that we were over there.”

With such an inherently dangerous job — about 2,400 out of every 100,000 linemen suffer serious non-fatal injuries each year, the most common being electric shock and broken bones from falls, according to the website Lineman Central — Aycock appreciates when people take a moment to express gratitude, such as bringing him food or water.

“It just makes you feel really good whenever you’re out there and people come up to you and thank you for what you do,” he said.

With so many people depending on the electric grid for their livelihoods, linemen like Aycock have arguably never been more important than they are now — which makes their skill set all the more critical and coveted.

“A lot of us think we’re kind of like the unsung heroes because without power these days, you can’t really do anything,” he said. “It’s a good feeling knowing you help people everyday.”