‘This is the greatest day’: Section of Highway 740 renamed after Badin native, jazz legend Lou Donaldson 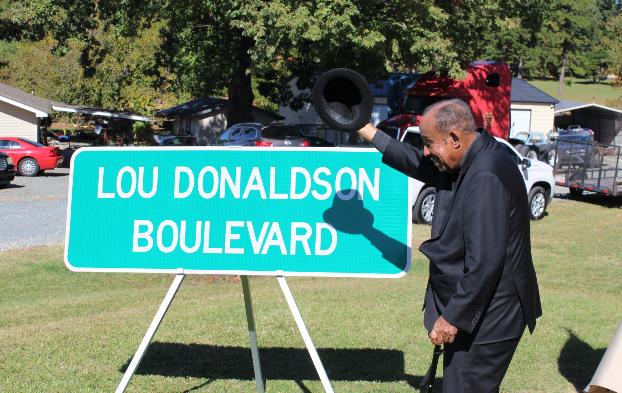 Lou Donaldson acknowledges the crowd after the sign named after him was unveiled.

Growing up in Badin in the late 1920s, Lou Donaldson struggled at times with the clarinet, the first instrument he learned to play. Occasionally, when he played the wrong note, the instrument would start squeaking, which drew laughter from his peers.

He used that as motivation: Donaldson promised that one day, everyone would have to pay to see him perform.

How right he was.

Throughout his travels, Badin remained close to his heart, as he never missed a chance to let people know where he came from. He served as grand marshal for the town’s centennial parade in 2013 and returned several times over the years to perform for local audiences.

For all of Donaldson’s many accomplishments throughout his life, none meant more than when he was honored Friday morning at a dedication ceremony where a five-mile stretch of North Carolina Highway 740, which runs through Badin, was renamed Lou Donaldson Boulevard by NCDOT.

“This is the greatest day that has ever happened to me,” he told the Stanly News & Press after the dedication ceremony, which took place at Cedar Grove AME Zion Church in New London, where his father had been a preacher. He added that the town has meant “everything” to him. 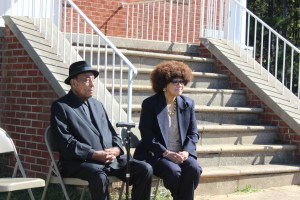 In front of several family and friends, including his daughter Carol Webster, Donaldson, who turns 96 on Nov. 1, regaled the audience with several stories of his childhood and career.

As talented as he was, Donaldson, who enlisted in the U.S. Navy during World War II, never missed a chance to educate the people around him about the place where he grew up.

He mentioned that when he was once at a club in Japan, a man came up to him with a map and told him he could not find Badin.

“I said give it to me and I looked for Yadkin River and when I saw Yadkin River, I just took my finger and ran it down the map and at the bottom was a small sign of Badin,” he told the crowd. The man then went around with the map “telling everybody this is Badin. This is where Lou was born.”

In addition to being an International Jazz Hall of Fame inductee and being named a NEA Jazz Master by the National Endowment for the Arts, Donaldson was inducted into the North Carolina Music Hall of Fame in 2012.

Like any great performer, Lou, who retired a few years ago, took his hat off and gave the crowd a quick bow once the sign was officially unveiled.

“There’s so many great things going on in Badin and Stanly County, but this is one of the most important things we’ve done,” said N.C. Rep. Wayne Sasser, one of the keynotes speakers, noting that people will “hear that sweet music every time we drive down that boulevard.”

Badin Town Manager Jay Almond, who first recommended a resolution to honor Donaldson in 2020, encouraged the people in attendance to think of the many cars driving along the highway in a different light.

“Hear them differently as they pass by this morning because the sounds you’re hearing will change today,” Almond told the crowd. “They’ll change from the din of traffic along N.C. 740 to the hum of visitors along Lou Donaldson Boulevard — and that’s pretty sweet.”

“Not as sweet as ‘Sweet Poppa Lou,’ but still pretty doggone sweet,” he added. 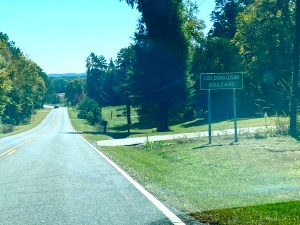 The new sign is posted along N.C. Highway 740 as drivers head into Badin.