Hall House to host fundraiser for ‘The Nutcracker’ production 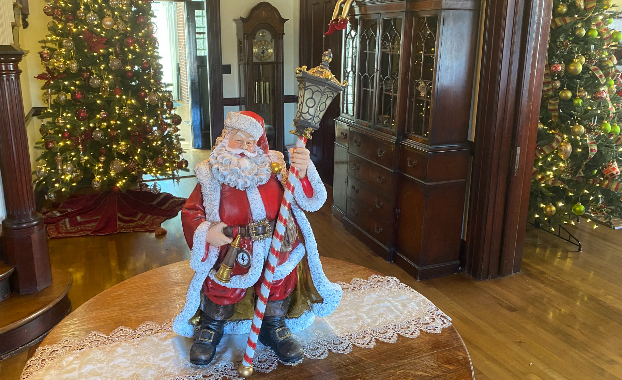 The Hall House and Gardens will host a fundraiser event for City Youth Ballet Saturday.

In order to raise money for “The Nutcracker” and to help get people in the holiday spirit, the City Youth Ballet will host an event, Stahlbaum’s Christmas, at Hall House and Gardens 5-9 p.m. Oct. 22.

Tickets cost $50 and include entry to the Hall House, plus drinks and hors d’oeuvres, along with a ticket to a performance of “The Nutcracker,” which runs Dec. 2-4 at the Stanly County Agri-Civic Center.

John Williams, general manager of the Hall House and board member of Uwharrie Youth Arts, the umbrella organization of Youth Ballet, has been busy decorating the property, located at 343 N. Second St., including putting up numerous Christmas trees and hanging garland.

“We’re hoping to get a good turnout for it,” he said of the event.

The Stahlbaum’s Christmas and another fundraiser, the Birdies Fore Ballerinas Golf Tournaments, are important because the total cost of putting on the production this year is about $22,000. This will help purchase new special effects, lights and costumes, including an updated apparatus for Mother Ginger, and allow Youth Ballet to offer free showings for Stanly County Schools students on Nov. 22.

“Each year we try to change things up because we get repeat audiences and it’s sort of a tradition for them,” said Uwharrie Youth Arts artistic director Leigh Roush. “We want it to stay exciting and for them to be able to look for new things in the performance each year rather than it be exactly the same.”

The production features 55 cast members, the majority from Stanly though others are from nearby counties including Montgomery, Cabarrus and Union. With it being such a big production, the Youth Ballet typically performs “The Nutcracker” every other year.

Ever since “The Nutcracker” debuted in 1998, Roush has strived to make sure it is affordable for families. Tickets cost $10, though students will get in free as long as they are with a paying adult.

“We would rather have a full house of people that may not get to go to Charlotte and experience a full ballet,” Roush said.

The production will run at 7 p.m. Dec. 2-3 and 3 p.m. Dec. 4. Tickets can be purchased by going to http://www.uwharrieyoutharts.com/home.html.