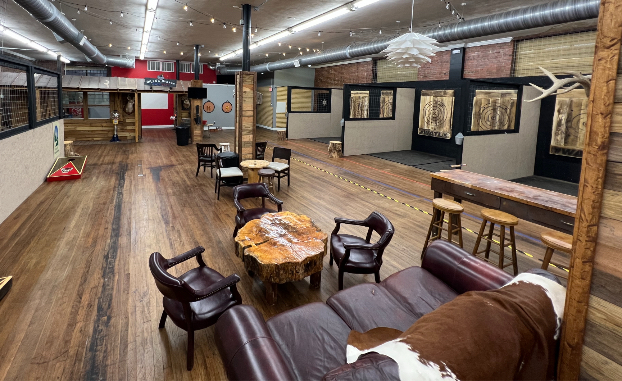 Armadillo Axe Throwing, which is at the former site of 4 Rivers Consignment shop at 124 W. Main St., had its soft opening a few weeks ago.

The business is accepting limited bookings for Thursdays through Sundays. It will host a Halloween Bash party 5-11 p.m. Oct. 29, followed by an official grand opening party on Nov. 5.

The owners are Andy Blakley, Earl Dedmon, DJ Zaleski and Bryan Pope, and every employee is a certified member of the World Axe Throwing League (WATL).

“It’s kind of been a thing that we’ve all done for years as a family,” said Erin Blakley, who handles the public relations side of the business.

She and the other members of her family have been involved in several competitions over the years and still enjoy the feeling whenever their axes hit the intended target.

“It’s been amazing,” Blakley said about the soft opening, which brought in several members of the community, including some Albemarle police officers. “The support that we have from the community and friends that have come in and people we didn’t know…that was truly amazing and we felt so welcome.” 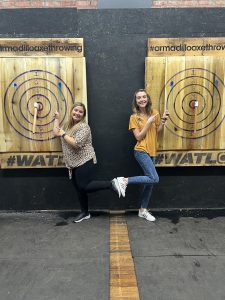 Blakley and her family were initially looking for a location on the outskirts of the city, “but this spot just came open and we had to jump on it,” she said.

The family made plans to establish an axe throwing business in downtown as early as 2020, but between the COVID-19 pandemic and health struggles, there were several setbacks.

Armadillo is the second throwing venue in downtown Albemarle after The Tomahawk Throwing Range & Blade Shop opened last fall. Blakley said her family’s business will be unique enough to where both can exist together. She said she’s spoken with Towahawk’s owner and is open to the two businesses collaborating in the future.

“We’re just excited to grow the throwing community not just in Albemarle but the surrounding areas,” she said.

The staff has been trained to teach all customers not just how to throw an axe, but how to hit the bulls-eye.

Armadillo will feature six double lanes (for a total of 12), according to its website. There will also be a game area with cornhole boards, giant Jenga and darts. Canned drinks and alcohol will also be available, though the business is still waiting on its ABC permit.

The business plans to host duels tournaments, big axe tournaments and regular tournaments. It also will have several “glow throw” nights, where the lights are turned off and the axes light up, along with the boards.

Blakley is working to establish a partnership with local food trucks and other downtown businesses.

“It’s going to be just a different vibe and a lot of fun, family entertainment,” Blakley said.

In addition to introducing people to the sport of axe throwing, the business is also a way for Blakley and her sisters to honor their father, Earl Dedmon.

“He is the inspiration,” said Blakley, whose family is originally from Florida but has been in Stanly County for the past 30 years. “This is kind of a family legacy type thing.”

Dedmon used to be part of a cycling group called the Armadillos, Blakley said, and each member had their own unique name associated with the animal. His nickname was “Elmo-diller,” while his best friend Mike Kappelmann’s name was “Arno-diller.”

“It’s been this long running joke their whole lives that every time they go somewhere, they get an armadillo,” Blakley said.

Over the years, the family has amassed all kinds of creatures — both real stuffed ones and those made out of wood, glass and other materials. Many of those are displayed throughout the business.

The throwing range’s mascot, which can be seen on its website and Instagram account, is an armadillo standing on its hind legs getting ready to throw an axe. 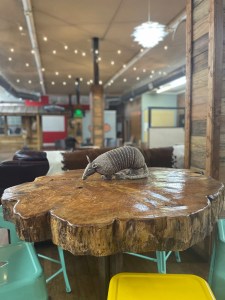 Armadillos are featured throughout the business. Photo courtesy of Erin Blakley.

People can pay $25 to rent a lane for an hour and 15 minutes (including one-on-one coaching for 15 minutes) and groups can pay $40 each for two hours and 15 minutes. There will also be a 15-minute individual throw session for $10.