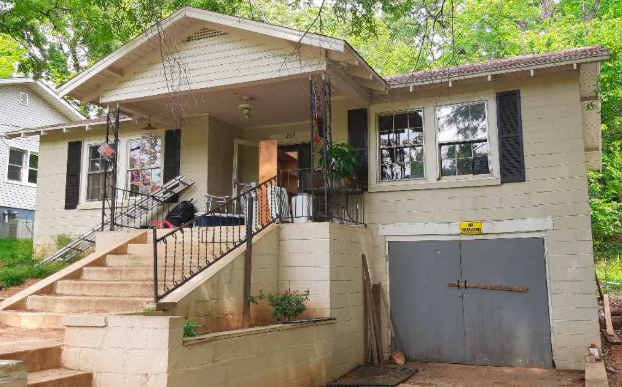 The property on 209 Eben Street is one of two homes deemed unfit by the City of Albemarle for human habitation as a result of years of neglect. Photo courtesy of Planning and Development Services.

Broken walls, windows and doors. Improper wiring and plumbing connections. Utilities being tapped into illegally. Allegations of illegal activities including drug use, drug dealing and prostitution.

These are just some of the problems the City of Albemarle’s planning staff has found over the years as it has tried to get two properties on Eben Street in compliance with applicable codes and to make sure they are structurally sound for people to live in. The owners have been given the opportunity to bring the properties up to the standards of the Minimum Housing Code, but the conditions of the properties have continued to worsen.

Stanly County Department of Social Services advised the city that it had relocated at least three families with children from 209 Eben.

Due to a lack of running water and proper facilities, tenants of 209 Eben “are regularly seen showering and urinating/defecating throughout the yard,” according to a written summary of the problems with the property provided to council.

The city council on Monday night approved ordinances for the properties to be vacated and closed. Any occupants living in the properties have until the end of October to leave.

“It’s a hazardous situation right now for anybody to be living in there,” Planning Director Kevin Robinson told council. “This would effectively allow for the police department to enforce this ordinance and make sure these properties stay vacated until the heir to the property is able to get building permits and actually make the repairs that are needed.”

With the original owners of both properties being deceased, it has been difficult to determine who is legally responsible for the homes, Robinson said.

Requesting Council approve a vacate and close ordinance for a property is typically seen as a last resort, Robinson said, and one his department has not dealt with much over the years.

“It is not something that is preferable to do a whole lot,” Robinson said. “We prefer to try and work with the property owners to fix their properties up while they’re in violation, but this has been going on for a number of years and is a major problem.”

During public comments, a woman who said her uncle and father owned the properties told Council that no one resides in either home. She said she has been working to improve the properties, especially 209 Eben, where she grew up.

‘It’s just not safe at all’

Several residents who live in the neighborhood told Council they do not feel safe due to what has taken place at the two properties.

Shonda Spana, who lives at 212 Eben St., told Council she has seen so much drug activity over the years that, as a mother of two young children, she does not let them go outside for fear of what might be occurring across the street. She said her 17-year-old daughter has left home due to the unsafe conditions.

Spana said she struggles to sleep because she spends so much time at night looking outside, worried someone will mess with her property. She said she has also been called racial epithets.

“For me to feel unsafe in my own yard, that’s a problem for me,” Spana said.

Spana said she does not personally dislike the people who have lived at the properties, “I dislike their activities.”

Roger Pryor, who lives in the neighborhood, told Council there is usually more traffic at 209 Eben and 211 Eben “than all the other residents there combined.”

Paula Oxendine, who lives at 213 Eben St., talked about waking up in the middle of the night to the sounds of fire trucks after someone had overdosed or gotten into an altercation. There have also been times her children have seen used needles strewn on the street.

“It is just not safe at all,” Oxendine said. “It is uncalled for.”