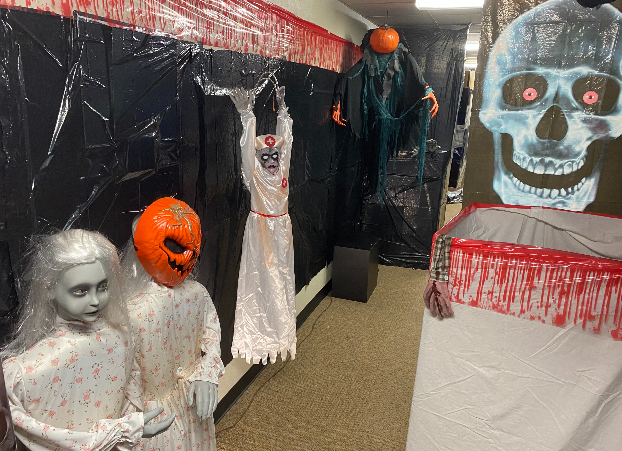 The haunted house at the Stanly County History Center will be open for a few hours this Friday and Saturday.

Families looking for a fright this weekend can stop by the Stanly County History Center in downtown Albemarle, which will be transformed into a haunted house for the first time, featuring all kinds of sinister creatures.

The scaring will run from 4 p.m. to 7 p.m. Friday and noon to 4 p.m. Saturday. The event is open to the public and admission is free.

After several years of organizing ghost tours throughout the county, museum director Megan Sullivan decided to switch it up. The idea for a haunted house came from the fact that Sullivan had so many Halloween animatronics in her garage, as her husband helps set up Spirit Halloween pop-up stores across the country.

“We have a ton of stuff and I was finally like, ‘Why don’t we lug them to the museum and set up a haunted house for the community?’ ” she said.

With the help of a small group of volunteers, that is exactly what she has done.

The haunted house, which runs the length of the hallway, will feature about a dozen motion-activated and light-up animatronics, including six-foot tall Jack Skellington and Sally from “The Nightmare Before Christmas” film, a large moving skeleton called The Grim, a witch, a zombie nurse and creepy twins. There will also be fog lights, a strobe machine and actors stealthily roaming about and hiding, waiting for the opportunity for some good scares. 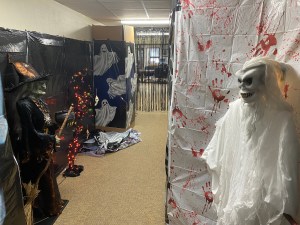 Most of the spooky animatronic characters come from Megan Sullivan’s garage.

The main gallery room will also be decked out with a creepy cemetery, a blow-up stagecoach with a horse and a fortune teller.

“I just hope people have a good time,” Sullivan said. “Halloween is supposed to be fun and we like being a resource for the community. I’m really glad we can put it on.”

There will also be a family-friendly room for younger kids with several games, including pumpkin and ring tosses and prizes.

The History Center will also host a costume contest at 2 p.m. Saturday. It will include several age categories.