‘Nobody should have to live like this’: Amhurst Gardens resident describes the toll of living with chronic sewage problems 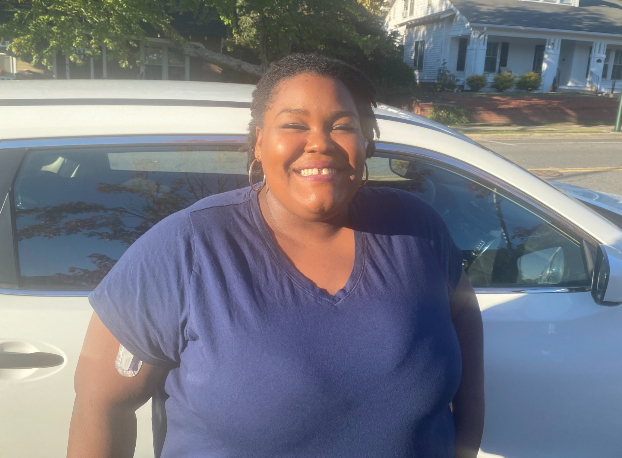 Alfreda Miller has lived in several apartment units at Amhurst Gardens since first arriving in the city almost 20 years ago.

Alfreda Miller was preparing for Thanksgiving last year when it happened — again. The toilets and bathtubs in her two bathrooms began overflowing with sewage and feces.

With her toilets temporarily inoperable, she made several calls and eventually spoke with a maintenance worker who told her about a port-a-potty, about 25 feet away, that she and her four children could use.

“I don’t know if he was trying to be sarcastic or making fun of a serious issue,” Miller said, but the incident just underscored the many problems she said she has encountered during her time at Amhurst Gardens, many of which have been beyond her control, and how difficult it has been to get certain people to take her problems seriously. 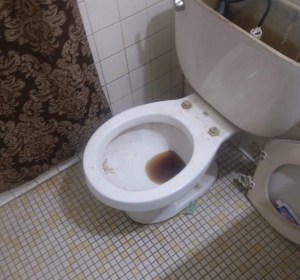 Miller, 38, has lived with her children at 1446 Inger St. for the past five years. During that time, she said her toilets and bathtubs overflow with sewage and feces about every month. It has become such a routine problem that she worries when taking showers, for fear of sewage leaking at any moment from the drain, and is afraid to invite people into her apartment.

Countless towels and blankets that have soaked up the water have been thrown away over the years. Clothes have also been discarded due to the pungent odor. The putrid smell often lingers in the house for several days, forcing Miller to keep her doors open to allow for new air to filter in.

“It is very disheartening and I feel so embarrassed,” she said. “It just makes you feel like you are nothing and you feel worthless.”

“Nobody should have to live like this in these conditions,” Miller added. “It’s ridiculous.”

At least 22 apartment units on South Bell Avenue along with Inger and Grigg streets have been identified as having plumbing problems. The total represents approximately 25 to 30 families, according to Public Housing Director Dr. Kim Scott, about 15 percent of the 150 units in Amhurst Gardens.

Scott and his staff are working with Stogner Architecture in Rockingham to determine the severity of the problem and hire contractors to renovate the properties. The bidding process for contractors should start soon.

Miller’s apartment is among the worst, especially for units with two bathrooms, Scott said. At least twice a week, maintenance workers unclog her toilets and bathtubs, he said, though it is only a temporary solution.

Scott was first alerted to her case in January, when he took over as director. Seeing her bathrooms overflow with sewage for the first time was hard for him to comprehend.

“It just shocked me so much because I just couldn’t believe it,” Scott said about Miller’s conditions. “It was like dark brown water just coming up.”

Miller and her kids are in the process of relocating to a vacant three-bedroom unit across the street that Scott found for them — much smaller than their current five-bedroom space. Other families are also getting temporarily rehoused while the damaged units get renovated.

In speaking out about her time at Amhurst Gardens, Miller hopes her situation can help inspire others going through tough times to not give up, no matter how bleak it might seem.

“If my story about this apartment can shine some light and help somebody else…or at least help fix the apartments…I will do that, I will tell that,” she said.

Starting her life in Albemarle

Originally from Oakboro, Miller grew up in Norwood. Around 2004, she decided to leave the comforts of home and move to Albemarle with her twin infants to start her own life.

“You want independence, you want to live on your own, you want to see if you can survive in the world,” she said.

She worked as a nursing assistant at Stanly Manor, Spring Arbor and Trinity Place while receiving her degree from Stanly Community College.

“I loved talking to the residents and talking with their families,” she said. “They loved me.”

As a young parent balancing school and work responsibilities, she found, from a financial standpoint, it made sense to live in public housing. Her first apartment was on Inger Street. The plan was to make enough money to move out of the housing community.

Having never lived in public housing before, she did not know what to expect. Looking back, she said her first apartment “wasn’t terrible, but it wasn’t up to par all the time.” Little things stood out in her mind, like the toilet making noises and occasionally overflowing, but she was younger and could more easily handle the issues.

About two years into her time in public housing, the first serious issue came up. Pregnant with her third child, Miller detected an unpleasant smell coming from around her refrigerator, which lasted for several weeks.

“I used to be gagging when somebody opened my refrigerator,” she recalled.

Maintenance workers came out numerous times but could never identify the problem. They suggested she clean her refrigerator, which she had already gone to great lengths to do.

Eventually, workers discovered a decomposing rat underneath her fridge. Judging by the animal’s decayed appearance, Miller thinks it may have been inside her apartment for several months.

Several years later, when Miller was living on Grigg Street, she remembers lying in bed and seeing an object flying around the room.

It was no shadow.

Every night, Miller said she saw the winged animals flying into her apartment via the fan in the attic. Miller estimated as many as 30 to 40 at certain times were around her unit.

She complained to Garry Lewis, the public housing director at the time, and threatened to alert the media if something was not done.

Her attic fan was plastered with cardboard and duct tape, but somehow bats still found a way inside. Eventually, workers were able to get the situation under control.

Life got harder for Miller in 2013 when after years of physical labor, including lifting and moving residents, she hurt her back. She continued as a nursing assistant, which only made her health problems worse. Miller eventually became disabled and stopped working.

Miller and her children moved into their third apartment on Inger in 2017, following some time in Charlotte and Norwood. It took only about three months for her toilets and bathtubs to start overflowing.

Maintenance workers regularly came to her apartment to unclog her toilets and bathtub drains, which provided a temporary respite but never addressed the underlying problem, which was the collapsed sewer pipes. A few weeks later, Miller’s bathrooms would again fill up with water and the process repeated itself.

Given the unpredictable nature of when the overflows occur, Miller, who does not like using public restrooms, never knew when she would have to find an alternative option for using the bathroom.

Given her back problems, her children helped clean the bathtubs, but she worried they were not as clean as they should be. As a result, Miller’s worst fear, as a diabetic, was getting in the tub and somehow contracting an infection, which would require some sort of amputation.

To complicate matters, as a result of the damp conditions, there is mold in the unit, including under her kitchen sink and in the bathrooms, which made Miller fear for any potential long-term health effects. She is especially worried for her 9-year-old daughter, Olivia, who has asthma. She said she believes her daughter’s condition has worsened since the family has lived there.

Expecting more from the city

She has reached out to previous public housing directors, but never got the sense that they were receptive to what she was going through. Whenever she told them about her sewage problems, she said it seemed like much of the blame was directed back on her.

She appreciates all the work Scott has been doing to help residents, including herself, but wishes the burden of repairing the damaged units did not have to fall on his shoulders. She believes this has been a problem that previous directors let get worse.

“He’s the only one that has asked us ‘How are you doing?’ or ‘How is everything?’ and that just makes you feel good knowing someone does care,” Miller said.

She spoke during a joint meeting between the city council, Scott and public housing residents last month at the E.E. Waddell Community Center.

Miller said she left the meeting angry because she believed people were too busy pointing fingers about whose fault it was instead of coming together to find solutions.

“I don’t think they were listening to what the residents were actually saying to them,” Miller said.

Finding slivers of hope even amidst the dark

Miller’s anxiety has skyrocketed since her time at Amhurst, especially dealing with the chronic sewer problems. A naturally sociable person, it has been hard to not allow visitors, including her children’s friends, into the apartment for fear of what could occur.

With Miller disabled, she makes about $800 a month plus about $100 each week working part-time at Forrest Oakes Healthcare Center, she does not have the option of leaving public housing and providing a better life for her children, which is tough for her to accept.

She has tried to stay as strong as possible for her kids but it can get to be too much. She sometimes sits on her porch alone and cries, wondering why so many obstacles have been placed in her path.

Miller does not know what the future will hold and is leery about her new apartment, considering what she has gone through.

She credits her children and her abiding faith, especially prayer, for helping to keep her going.

“I feel like God is taking me through this to get me somewhere else,” Miller said.

Despite all she has been through, Miller still has dreams: for a new home, away from Amhurst Gardens, for the chance to host family and friends for Thanksgiving and Christmas dinners. For a better life for her children.