Mandee Schaub of New London knows the feeling of a migraine all too well.

Schaub, the daughter of Fauna and Michael Schaub of New London, graduated in May from East Carolina University with a master’s in biomedical science and a concentration in neuroscience.

She plans to help people who suffer from the debilitating headaches and has begun a doctoral program at the University of Texas at Dallas, working in the lab of Greg Dussor — one of the nation’s few migraine research labs.

Schaub is also the first migraine patient to work with Dussor.

“She’s probably one of the most motivated students we’ve had come work here, at least in our lab,” Dussor said.

Schaub, 24, grew up in Brunswick County and graduated from Pfeiffer University in Misenheimer, studying pre-medicine. She then enrolled in graduate school at ECU, deciding research was more for her than becoming a doctor. 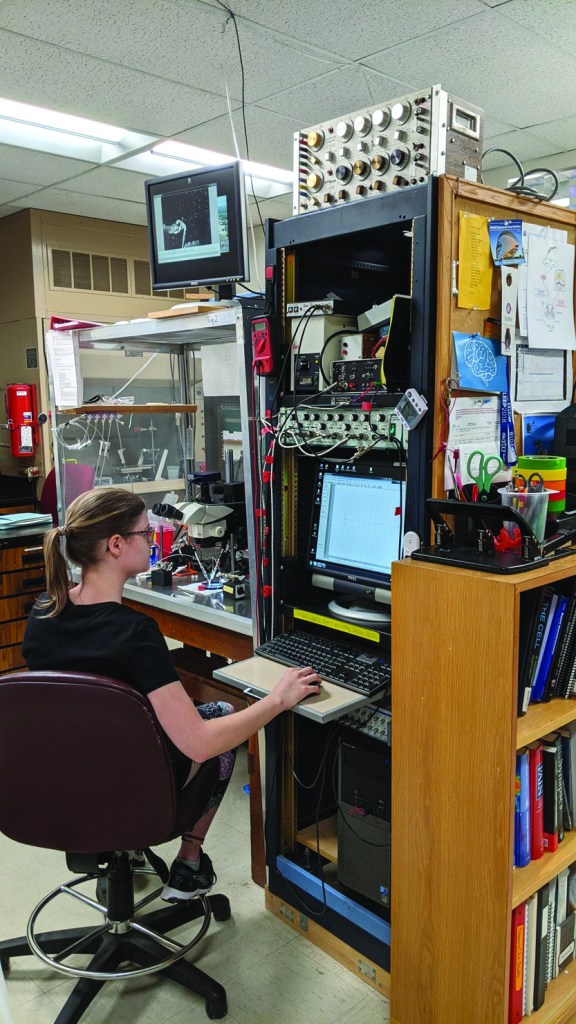 Mandee Schaub works in the lab of Stefan Clements at East Carolina University. She’s now a doctoral student at the University of Texas-Dallas. (Contributed)

“I realized I could have a lot larger scale of helping people with headaches if I was helping develop therapeutics or helping find out what was causing the headaches rather than just treating patients,” she said.

At ECU, her mentor was Stefan Clemens, a professor of professor at the Brody School of Medicine. She also worked closely with Kori Brewer, a professor of emergency medicine and collaborator with Clemens on pain-management research.

“She’s driven, and she’s really driven by her desire to understand what’s at the bottom of things,” Brewer said.

Schaub also worked in the ECU Office of licensing and Commercialization and with Clemens and Brewer on two patents related to pain relief, including one where she is listed as a co-inventor on the provisional patent application: “Methods and compositions for preventing and treating fibrosis and improving functional recovery after injury or with aging.”

As she seeks to understand what causes migraines and how she can translate that into therapeutics, Schaub has gotten some relief from a monoclonal antibody therapy the FDA approved in 2018.

“I was living at an eight (pain level) every day at that point,” she said. “I was mostly debilitated with headaches, and I was doing a lot of grinning and bearing it. But now I’m living with like a four or five on my pain scale. It’s been an interesting journey, but I think it’s prepared me for what I’m about to do.”

Once she completes her doctorate, she plans to come back east to work, study or teach.