‘This is all about having fun’: Stanly County Concert Band members reflect on anniversary, prepare for concert 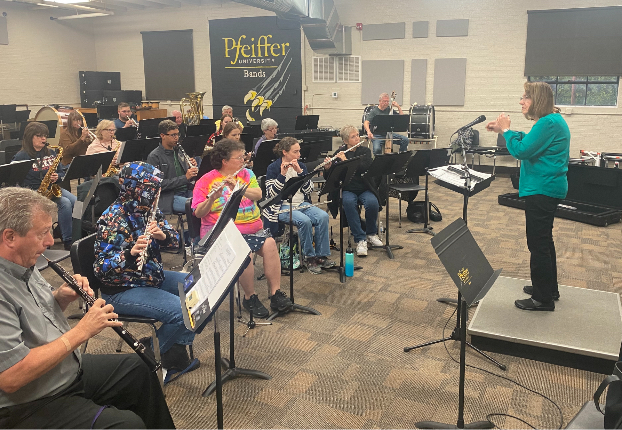 Carmella Hedrick directs the band during its practice.

In honor of its 10th anniversary, the Stanly County Concert Band commissioned a new piece to debut during its upcoming fall concert.

The piece, called “Never,” which was composed by Joseph Earp, who was director of Instrumental Music at Pfeiffer University last year, is a testament to the band’s resiliency over the last decade, especially in recent years.

“It’s based upon us because we never gave up, through Covid and everything, we’ve kept persevering,” said co-director Carmella Hedrick, who has been part of the program since its beginning, noting the group had a virtual concert at the height of the pandemic. She plays the flute while her husband Tim, another co-director, plays the clarinet.

And it is that perseverance and a shared passion for music among its members that allowed a once-fledgling group to grow and become an integral piece of the Stanly County arts culture. The band has about 45 members, a little less than pre-Covid but more than double the number compared to when the group formed in 2012.

Over the years, the band has grown stronger as its members, many of whom have been involved since the beginning, have helped make each other better.

“The band has become such a huge part of the community and for the people in it, it is a huge part of everybody’s lives,” said founding member Clif Robinson, who plays trumpet. “We all love music. We play as much for ourselves as we play for other people.”

Clarinetist Lisa Ewers, who is president of the group, says members have developed such strong personal relationships with each other over the years that the band, in essence, has become a second family.

“When you’re a musician, it’s a unique family and that’s a lot of what this concert band is for each other,” she said. “We speak the same language, we appreciate the same musical art and we want to share that with other people, to lift other people up.”

With weekly practices for the new season having resumed in August (the group rehearses Thursday evenings in the Pfeiffer band room), Hedrick senses there is a renewed sense of energy as the members are well aware and proud of the 10-year milestone.

“I think everybody’s excited, I know I am,” she said.

Individuals 18 and older with musical experience are invited to join the band, whether they are seasoned veterans or have not played since high school.

“We’re fortunate that we have good musicians, but we also have those who just love to play and have never trained past high school,” Hedrick said. “We ask them to just play what they can and we have enough people that can play the rest. So when the whole thing comes together, it’s great.”

“This is all about having fun, we don’t turn anyone down,” Robinson said, noting auditions are not required to become a member.

One of the youngest members, 23-year-old Mila Rutter, who plays trumpet, joined in 2019, after learning about it from Hedrick, her Stanly Community College instructor.

Now a student at Pfeiffer, Rutter appreciates all she has learned during her time in the band, saying she’s grown as a musician and has become more confident as a person.

Since individual musical ability and proficiency often varies among the group, members are advised to “do no harm,” meaning if someone is not comfortable with a certain portion of a piece, they don’t have to play it.

“It’s not like: ‘Hey we’re going to push you outside your comfort level,’ ” Rutter said. “It’s always something that you’re comfortable with and if you’re not, we can work around that.”

About the upcoming concert

For its fall concert, “A Decade in the Making: Tenth Anniversary Celebration,” which takes place at 7 p.m. Nov. 3 at the Stanly County Agri-Civic Center, the concert band is bringing back popular musical pieces that have been performed over the years.

These include both audience favorites, including soundtrack highlights from “Pirates of the Caribbean” movies along with the music John Williams composed for the “Star Wars” films, and band favorites, such as “Pilatus: Mountain of Dragons” by Steven Reinecke and “Shenandoah” by Frank Tichelli.

There will also be three new pieces: “Fanfare for a New Era” by Pinkzebra, “Cosmic Wonder” by Bruce Tippett and Earp’s “Never,” which the band describes as a contemporary piece with a fast tempo.

“It has a constant energy about it that continues to propel you forward,” Ewers said about Earp’s piece, which she thinks the audience will enjoy.

Carmella and Tim Hedrick, along with Frank Poolos, will each conduct three pieces, while Earp, the guest conductor, will oversee “Never.” The concert should last around 75 minutes.

To celebrate the 10th anniversary, people attending the concert will receive a free T-shirt and will be given a ticket at the door, which will make them eligible for raffle prizes.

“We want to thank the community for supporting us over the past decade,” Hedrick said.

The concert is free to the public.

The band’s Christmas concert will be 7 p.m. Dec. 8 at Central United Methodist Church in Albemarle.

For more about the band, visit stanlycountyconcertband.com.