The Talent Company to perform ‘She Kills Monsters’ 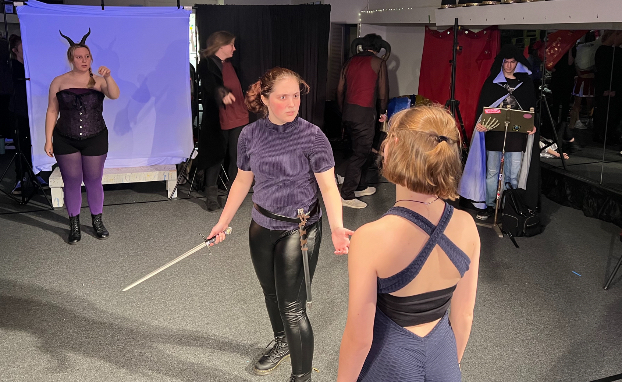 Hannah Carr, center, interacts with Molly Brown during rehearsal for "She Kills Monsters," with Megan McLary, Kayleigh Bounds, Ian Kirchbaum, and Elias Trejos behind them. Photo courtesy of Christian Payne.

Christian Payne was the drama teacher at North Stanly High School a few years ago when he came across a relatively new play that quickly caught his attention.

The dramatic comedy “She Kills Monsters” tells the story of Agnes Evans, a high school senior who recently lost her sister, Tilly. Having been very distant from her sister while she was alive, Agnes embarks on an adventure to get to know her sister better by playing a Dungeons & Dragons module that Tilly had written, and discovers things she’d never imagined.

“I read it and immediately fell in love with it and knew that I absolutely had to direct it,” he said, noting he wanted to put it on at the school but did not have the resources nor the time “to do it justice.”

His dream of directing the production is about to come to light as the Talent Company will perform the play at Tiffany’s at the Boardroom in downtown Albemarle. It will be Payne’s second time directing a production with the organization, following “The Glass Menagerie” last summer.

The play, written by Arkansas playwright Qui Nguyen in 2011, touches on topics such as sexuality and bullying. The TC production will be a “Young Adventurer’s Edition” of the play, which removes the explicit language and ages down some of the characters.

The main character Agnes plays the Dungeons and Dragons game “in an attempt to try to discover and understand who her younger sister was,” Payne said, noting the plot of the story, which includes “sword fights, homicidal fairies, nasty ogres and ’90s pop culture,” takes place in reality and in the imaginary game world that her sister Tilly created.

Payne hopes the play, which has surged in popularity over the years but is still unknown to many people, appeals to an audience that might not connect to mainstream Rodgers and Hammerstein-type productions “but they might connect to something that is a little more grounded in that adventure, nerdy quest, reveling in being the outsider.”

“It is about understanding and acceptance and fighting your inner dragons and demons to become the warrior that we have inside of all of us,” he added.

The TC production features 14 cast members, ranging in age from 15-18. The actors have been rehearsing since late August.

“My favorite part of ‘She Kills Monsters’ has been getting to know the cast and all their different personalities,” said senior Hannah Carr, who plays Agnes. “They’re an amazing group of people and there’s no one else I’d rather go on this adventure with.”

The event includes a dinner/brunch before the show and general admission for both is $25. The play should last about 90 minutes, including a 10-minute intermission, Payne said.