On a recent Sunday morning, about 150 members and guests of Salem United Methodist Church in Millingport spread quilts across hay bales arranged under tents and trees.

The congregation gave up their cushioned wooden pews for the day and tried to imagine how it might have been for their forebears who first gathered near that spot some 200 years ago.

A 200th Anniversary Team made up of Salem’s History Committee and Worship Committee, and too many people to name, spent about two years planning for the celebration and looking for ways to commemorate life at Salem UMC.

A history room, a hymnbook collection, photographs and dinnerware displays are just the beginning. An art installation representing the Salem Family Tree, commemorative memorabilia and an anniversary banner, plus an edible display of cakes by Salem’s heritage bakers, all combined to remind members of times past but not forgotten.

During the Celebration service, music and “history moments” told Salem’s story.
The church was established in 1822, a mere generation after the death of Methodism’s founder John Wesley. John and his brother Charles led the 18th-century revival movement in England which became known as Methodism.
Charles wrote thousands of hymns — sermons in musical form — many of which are still sung in churches everywhere, and of course, at Salem.

Choir Director Sandy Turner led the congregation in singing “O for a Thousand Tongues to Sing,” a hymn she considers to be Methodism’s theme song.

She also told of the early practice of “lining,” which compensated for the lack of hymnals. The hymn leader would call out the words from one or two lines of a hymn which the congregation sung in turn.

Who in 1822 could have envisioned so many voices singing praises in that open field 200 years later, or imagined the sound of an electric piano?

Two-hundred years ago, only a lay minister was available to preach on occasion. In fact, when a Methodist circuit rider serving eight or 10 churches was assigned to Salem, preaching services were on Thursday and families would gather for several days at a time. Not until 1872 did the church have regular Sunday preaching.
Prior to an 1874 revival, there were only 27 members, mostly women. Afterwards, reports say around 60 people joined the church.

Salem’s first historian, A. J. Lipe, now deceased, noted that the first house of worship was a plain and drafty structure of hand hewed logs which served the small congregation for 59 years. Then a white frame building took its place until 1922 when the present brick sanctuary was built. 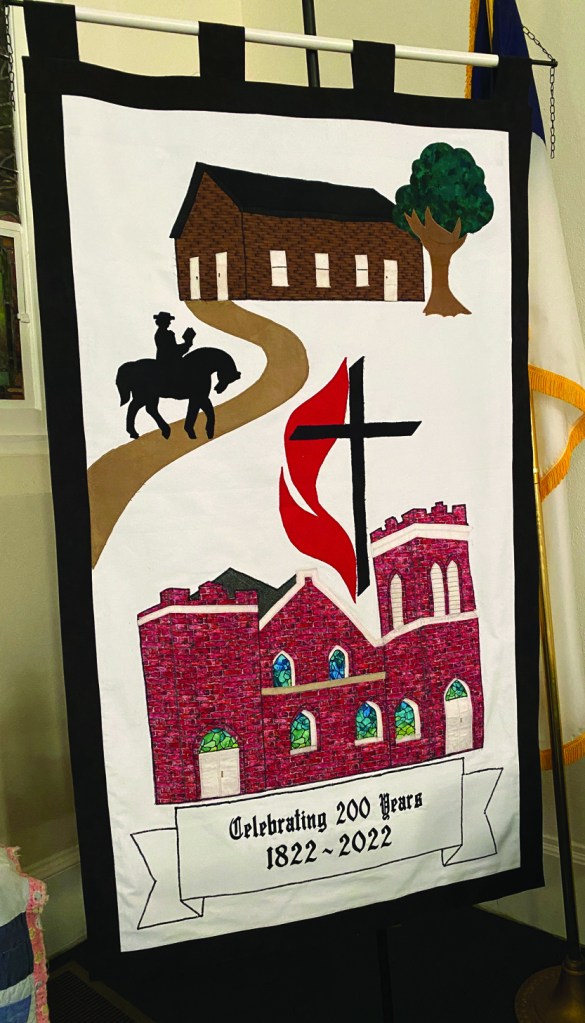 Rev. Laura Auten, UMC district superintendent, gave the anniversary message on Oct. 16, reminding the people of Salem UMC that because Jesus is the head of the church, “We do what Jesus does, and say what Jesus says.

Today, Salem’s senior pastor, Rev. David Talbert, doesn’t ride a horse, but he preaches twice on Sunday. First from a pulpit in a thoroughly climate-controlled sanctuary, then he takes a short walk to the Fellowship Building for another worship service known for its informality and contemporary music.

The pastor even changes out of his clerical robe and dress shoes into jeans and tennis shoes for “Salem Too.”

“We have a mix of young people and older folks who are energized by the music, and we want to meet the needs of people within the church as well as draw in new people,” Talbert said. “After celebrating Salem’s heritage of 200 years, it’s good to be launching something new and forward thinking for the future.”