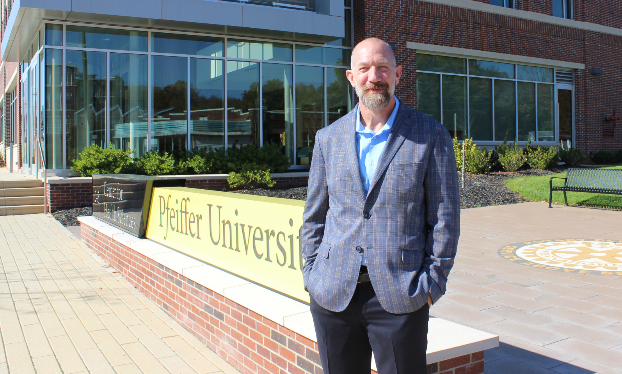 Dr. Scott Fisher has been the director of Pfeiffer University's PA program since May. (Photo by CHRIS MILLER/staff)

Scott Fisher had always felt comfortable working and operating in small, rural communities. As a 25-year veteran of the U.S. Army, he was deployed to sparse areas in Afghanistan and Iraq.

“I am a big fan of small town North Carolina and when I saw that the program leans towards rural health, I have certainly practiced in what can be considered rural areas in my career,” said Fisher, who recently became Pfeiffer’s new PA director.

Physician assistants, or PAs, are licensed clinicians who practice medicine in every specialty.

Growth for physicians assistant is expected to increase 31 percent over the next 10 years, according to the U.S. Bureau of Labor Statistics.

Fisher, who grew up in Ohio, was most recently the academic coordinator for the Physician Assistant Program at Methodist University in Fayetteville. He has been a certified physician assistant since 2009 and has practiced clinically for most of that time in family and emergency medicine. Fisher was an emergency medicine physician assistant at the Womack Army Medical Center at Fort Bragg for two years and then spent a year in San Antonio, overseeing the expeditionary combat medic program, before his position at Methodist.

Once Fisher, 51, learned Pfeiffer was conducting a national search for a new program director (the original head of the program, Brenda Diaz, left in June 2021) he contacted his Army friend, Dr. Frank Christopher, medical director and an assistant professor with the PA program.

“I reached out to Frank to learn more about the program,” Fisher said.

After he applied for the position, Fisher had a Zoom interview with numerous officials, including Pfeiffer President Dr. Scott Bullard and Provost Daniel Mynatt, before he made his first trip to Albemarle in the spring.

Fisher met with several members of the community and came away impressed with how much Pfeiffer’s downtown campus had already impacted so many people.

“What struck me was that folks here were extremely welcoming, very appreciative of the Pfeiffer campus and excited about what having Pfeiffer in downtown Albemarle meant to the community,” he said. “And what that did for me was it kind of gave me some excitement about the possibilities that we could achieve here.”

Following several additional interviews, Fisher was selected as the new PA director. He began with the university in early May.

“Every day I am grateful that Dr. Bullard and Dr. Mynatt see fit to allow me to continue to hold this position and to be the person designed to lead this program into the future,” he said.

Working to bolster the PA program

Now into its third class, the PA program has 78 students, with ages ranging from early 20s to mid-40s, divided between the second and third cohort. The program combines a 15-month didactic phase with a 12-month clinical phase that includes more than 2,100 hours of supervised clinical practice experiences, according to the website.

The second cohort of students, which began at Pfeiffer in January 2021, are currently going through clinical rotations, where they are in the community working with healthcare providers such as Atrium Health Stanly and Monarch. Each rotation lasts five weeks. These students are set to graduate next May.

The PA program was recently placed on accreditation probation by Accreditation Review Commission on Education for the Physician Assistant, Inc. (ARC-PA) during its September meeting, following a site visit in the summer, and will not be able to start planned classes for its fourth cohort in January.

One of the reasons was because there are not enough clinical rotation sites in the area to support more students. As of now, only 38 percent of the program’s clinical sites are in rural locations; the rest are in larger communities, including healthcare providers in Mecklenburg and Cabarrus counties.

Fisher said the probation will not impact current students and is hopeful necessary improvements, including hiring additional faculty, can be made so the next cohort can begin in January 2024.

In addition to overseeing the program, Fisher is also a professor, which has allowed him the chance to get to know students on a more personal level. He is teaching neurology this semester and taught pulmonology last semester. He will teach point-of-care ultrasound to clinical students in December.

“The teaching is where the fun is, the fun is not in the administrative work,” he said. “The most satisfying part of being in any education field, for me I think, is watching the light bulbs come on and watching when the concepts become reality.”

“He has the background experience, both clinically and in teaching, plus the leadership ability and knowledge, to bring together a new team of folks here and basically rebuild the program from the ground up,” he said. 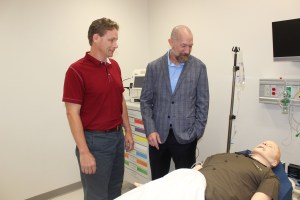 Frank Christopher and Scott Fisher, who first met in the Army, in one of the PA program’s many simulation labs. (Photo by CHRIS MILLER/staff)

Fisher said the goal of the PA program is to meet the needs of residents in rural communities, which tend to be devoid of major healthcare providers. Looking to build from within, Fisher looks forward to the time when the local healthcare pipeline is so suffused with Pfeiffer graduates that current students are regularly trained in the field by their predecessors.

“My hope is that we are able to expose these students to environments and to this portion of North Carolina where, after they graduate, they want to stay, whether that is joining an existing practice here in Stanly County or the surrounding counties,” he said.