A police officer accused of sex crimes against a minor has resigned, according to Albemarle Police Department. 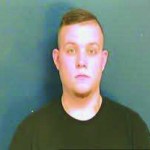 After going before a magistrate, Johnson was issued a $500,000 secured bond and was booked at the Anson County Jail in Wadesboro.

Johnson was hired in the Patrol Division on Aug. 9, 2021, according to a statement from the city.