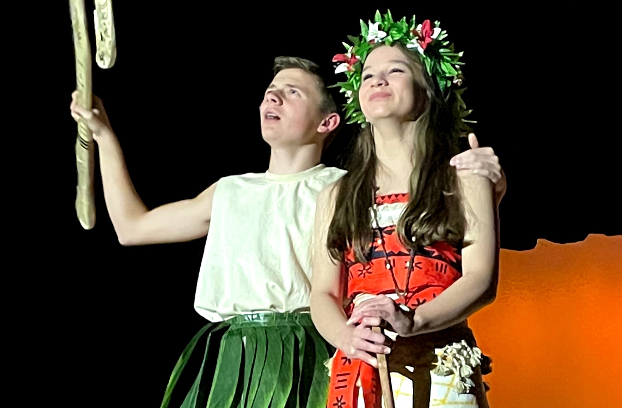 Logan Huneycutt as Maui with Mia Benoy as Moana rehearse a scene from "Moana Jr." Photo courtesy of Laura Almond.

The Talent Company is about to take audiences to the Polynesian island of Motunui for its next production, which debuts Friday at the Albemarle Neighborhood Theater.

Disney’s “Moana Jr.” is a musical adaptation of the 2016 Disney animated film, bringing the adventures of Moana and the demigod Maui to life onstage. The cast consists of 25 kids ages 8 to 14, who have been busy rehearsing since early September, including six who will perform with TC for the first time.

“We tried to take the magic of the movie and make it live theater as much as possible,” said choreographer and production manager Laura Almond.

This will be the second time in the last year that TC has adapted a popular Disney film and brought it to the stage. The group performed “The Little Mermaid Jr.” last October.

“We don’t naturally gravitate towards Disney, but I think the kids do,” Almond said. “We like to keep everything kind of light and family-friendly.”

To replicate the feeling of being on the ocean — where the majority of the 2016 movie takes place — colored fans will be utilized throughout the production to represent not just water, but also fire and smoke.

“It’s really a colorful illustration to help bolster the whole storytelling,” she said.

In putting on the show, it was also important to make sure Polynesian culture was represented in a respectful way.

“We tried to keep it true to the Polynesian cultures and kind of do it in a way how they would tell a story with the ancestors, so we tried to be very authentic with the costumes,” Almond said.

The show is largely faithful to the movie, though there are a few differences. While Moana had a pet rooster Heihei and pig Pua, who follow her throughout the film, for the production, she will have human companions. Maui will also not have any tattoos, which played a key role in the movie.

Many of the key songs that people have come to enjoy, such as “How Far I’ll Go” and “You’re Welcome,” are part of the production, along with some additional songs that were not in the film.

Between the colorful costumes, rich storyline and creative special effects, Almond hopes the audience will have a good time.

“It’s so visually beautiful but the kids with their voices, it also sounds beautiful,” she said.

The performance should last about 55 minutes.