Pickler said before the Armed Forces Entertainment-sponsored show that she was “excited to … bring a little piece of home to our service men and women and their families, sing a few songs, and just be in good company.”

Prior to Pickler coming onstage, the color guard marched into the CZCC ballroom and posted the colors for the singing of the Japanese and U.S. national anthems. Then Col. Christopher Tomlinson, commander of U.S. Army Garrison Japan, provided some remarks in which he noted the importance of observing Veterans Day.

“In the Army, we consider our greatest asset to be our people,” Tomlinson said. “As a nation, we must ensure that the service and sacrifice of our veterans is never overlooked or forgotten.” 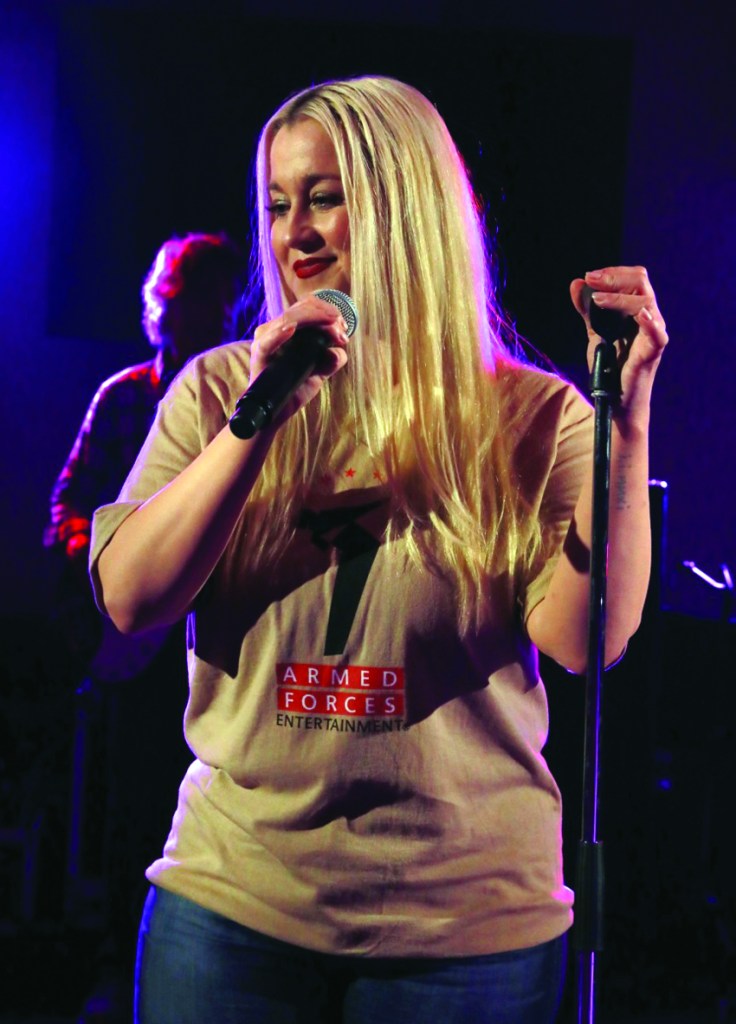 Tomlinson concluded by saying, “On Veterans Day, we honor the brave men and women from all walks of life who have stepped forward to defend our nation throughout our history,” before welcoming Pickler to the stage to start the show.
The singer came out and greeted the crowd as her band launched into the opening notes of “Little House on the Highway” from her 2011 album, 100 Proof. Much of the crowd moved to the foot of the stage, filming the performance as they tapped their feet or danced in place.

Behind the crowd, a group of more than a dozen people, mostly Japanese and clad in country-western attire, line danced along to the more upbeat songs and helped teach the moves to the uninitiated who joined in.

That kind of fun and energetic atmosphere is what Pickler said she hopes to create at her shows, adding that “I think that music just brings people together.”

Pickler first came to fame in 2006 as a contestant in the fifth season of “American Idol,” the reality singing competition, in which she placed sixth.

Her ensuing popularity led to her becoming a multi-hyphenate entertainer with four studio albums, a stint on “Dancing With the Stars,” voice acting in animated films and TV shows, leading roles in Christmas movies on the Hallmark Channel, her own “docu-comedy” reality TV series and hosting her own radio show on Sirius XM.

Pickler is an avid supporter of the U.S. military, and her stop at Camp Zama is part of her first tour in Japan. Since 2007, she has also performed for troops in Iraq and Afghanistan, Bahrain, Kyrgyzstan, Italy, Turkey, Spain and England. Last year she was named a USO Global Ambassador after having completed a dozen tours with the organization.

She describes the feeling of performing for military audiences in a very succinct way.
“Oh my gosh, it’s the best. It really is,” she said. “I have mostly spent Christmas overseas, which is even more special [to perform] during the holidays.”

She also emphasized the significance of being able to perform on Veterans Day.
“Everyone can do their part,” she said. “I do not wear the uniform, obviously, but I can serve those who serve. Just to be a part of something that matters is important.”

At the end of the show, Pickler stayed for fans to be able to greet her and take a photo together. She said there is one thing she hopes people come away with when they come to see her perform.

“I just want everyone to feel good and to just be a bright light in the world,” she said. “Let’s all get together and have a good time and be in good company, and leave with a smile.”