‘You need to clean it up’: Groups discuss renewal of Alcoa’s stormwater permit, how company should improve 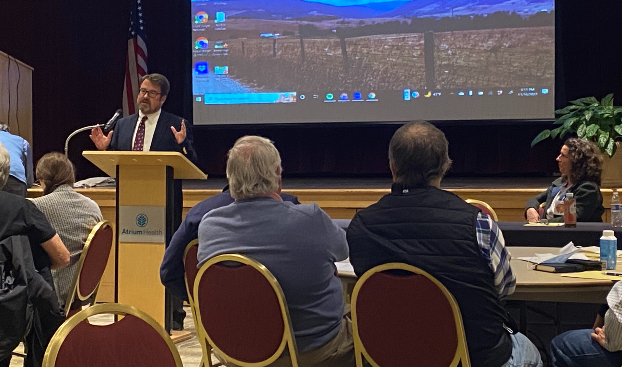 Though Alcoa is no longer operating its aluminum smelting operation,cas contaminants continue to leak into nearby bodies of water including Little Mountain Creek and Badin Lake, causing concern and anger among many residents in the area.

High levels of cyanide and fluoride, for example, have been detected in stormwater flowing from Alcoa, which is now Alcoa Badin Business Park, through a discharge point known as Outfall 005, potentially contaminating Little Mountain Creek, and then flowing into larger bodies of water including Lake Tillery. Two other discharge points, Outfall 012 and Outfall 013, are in close proximity to public swimming areas around Badin Lake.

“Essentially, Alcoa is putting its hazardous waste into the water and the state is allowing them to do that,” Edgar Miller, executive director of the Yadkin Riverkeeper, told the gathering, which included N.C. Rep. Wayne Sasser. “And the question is: How much is too much? And, in many cases, we think anything like that is too much.”

Alcoa opened its aluminum smelting operation in Badin in 1917 and the company dumped hazardous waste without regulation until 1980, according to Ryke Longest, co-director of Duke University’s Environmental Law and Policy Clinic, when the EPA established the Resource Conservation and Recovery Act regulation declaring spent potliner a hazardous waste.

Much of the hazardous waste was dumped in West Badin, a predominately African American community. Many of these people worked at Alcoa, and as result of being exposed to the hazardous material, former employees claim they developed health issues including cancer and asbestosis, a chronic lung disease caused by inhaling asbestos fibers.

Hazardous contaminants found in the Alcoa spent potliner include toxic fluoride and cyanide which are leachable in water, along with polychorinated biphenyls (PCBs) and polycyclic aromatic hydrocarbons (PAHs), Longest said.

The contaminants are absorbed into the material and get released over time into the ground.

“It’s like a bunch of wet sponges filled with fluoride compounds and cyanide compounds and when you put them in the ground and water gets in contact with them in any way, through groundwater or otherwise, it moves and gets into the surface water,” Longest said.

Though Alcoa, which closed the aluminum smelting operation in 2007, has enacted interim measures to try and limit the damage of the hazardous waste, including putting up fences around the plant and dump sites and applying a mixture of soil, grass, clay and straw to cover the landfill sites, Longest said the measures have only been a temporary remedy.

Longest mentioned what has happened in town, particularly to the people of West Badin, prompts environmental justice concerns.

Unlike in Badin, where Black people account for about 34 percent of the total population and where North Carolina’s Department of Environmental Quality (DEQ) has never forced Alcoa to properly dispose of the contaminants buried in the ground, hazardous waste from Alcoa was excavated in Massena, New York, which is about 90 percent white, due in part to the work of New York’s Department of Environmental Conservation, Longest said.

“There is a real question here about whether the state of North Carolina is using a different standard in applying to this site than the state of New York,” Longest said.

A draft renewal permit should be issued to Alcoa sometime before the end of the year. In the interim, the company is utilizing its old permit.

Under the current permit, Alcoa is allowed to discharge contaminated water directly into Badin Lake and Little Mountain Creek through 11 release points, including Outfalls 005, 012 and 013.

“That water is coming from the land that is storing those thousands of tons of spent pot liners that Alcoa used in its processes over several decades,” said Jasmine Washington, attorney with the Southern Environmental Law Center, which represents a group of concerned citizens in West Badin.

With all of the contaminated water that gets discharged, Alcoa has been required to monitor for five pollutants and it has to set discharge limits for just two: cyanide and fluoride. As part of the monitoring process, Alcoa is required to take a sample from its outfall and self-report it to DEQ.

“For three of those pollutants, there is no maximum or no limit on how much of that pollutant they are allowed to release,” Washington said. “All they have to do is tell DEQ that they are releasing it.”

Even though high levels of cyanide and fluoride have routinely been detected in stormwater flowing from Alcoa through discharge points, especially Outfall 005, Alcoa just needs to report to DEQ an average of samples are below discharge point.

So if one sample that is taken exceeds the amount of cyanide or fluoride that can be allowed, Alcoa can perform another sample and average the two together to fall back into compliance.

People can be exposed to cyanide by “breathing it, absorbing it through their skin, or eating foods that contain it,” according to the Centers for Disease Control and Prevention. Small amounts of cyanide can cause dizziness, headache, nausea, vomiting and rapid breathing, while large amounts could cause respiratory failure leading to death. Exposure to high levels of fluoride could potentially result in tooth decay.

Recommended changes to the NPDES permit

The groups that spoke during the meeting, including Protect Badin Lake, which was created in 2020 and has more than 200 members on its mailing list, are asking that DEQ issue a more stringent stormwater permit for Alcoa, including requiring Alcoa to excavate the most dangerous of its hazardous waste sites.

Jen Caldwell, founder and co-president of Protect Badin Lake, said her organization wants DEQ to prohibit Alcoa from diverting discharges from Outfall 005 into Little Mountain Creek and to eliminate outfalls 012 and 013 from discharging contacted water into public swimming areas.

“Our concern is that nowhere should any chemicals be going into any recreational bodies of water,” she said.

Aside from getting rid of the discharge points, the groups want the new permit issued to Alcoa to also require the company to:

• Remove its buried hazardous wastes from the site, which would reduce the ongoing discharge of pollutants.

• Sample more frequently for cyanide and fluoride at regular intervals and set effluent limit for aluminum.

•  Monitor for a wider range of contaminants, including polycyclic aromatic hydrocarbons (PAHs), polychlorinated biphenyls (PCBs) and heavy metals, including mercury.

The various groups that spoke also want NC Division of Water Resources, which is under the purview of DEQ, to hold an in-person public hearing on the draft permit once it is issued.

West Badin resident Macy Hinson, who has lived in the town his whole life and worked for Alcoa for more than three decades, summed up everyone’s feelings as he discussed the urgency of Alcoa addressing its problems.