Huneycutt reflects on 16 years as clerk of court 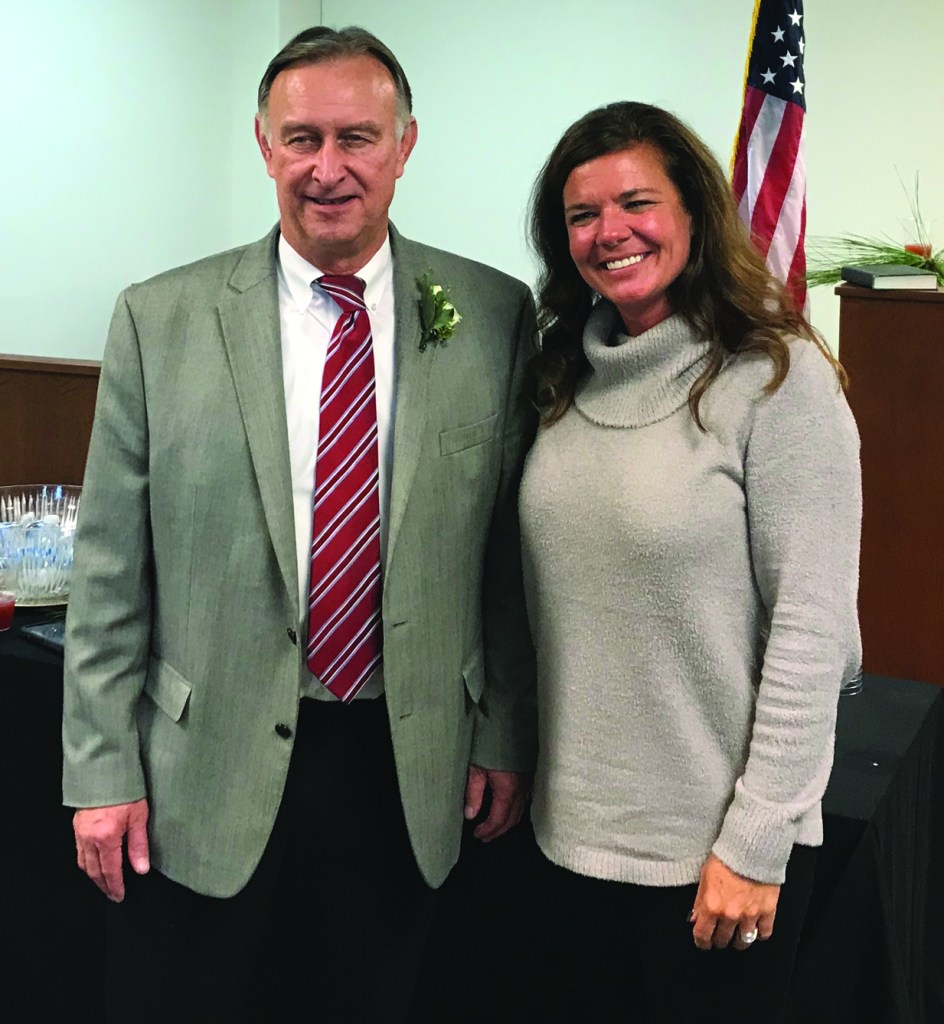 Michael Huneycutt, outgoing Clerk of Court for Stanly County, was honored with a retirement reception on Thursday, as many friends, family and co-workers attended to express congratulations and well-wishes for the future.

Huneycutt, whose 16 years of service as clerk followed a 31-year teaching career, summed up both careers in five words.

Explaining what led him to seek elected office after retiring from West Stanly High School in 2006, Huneycutt cited a long-time personal interest in local political matters, in addition to his father (Melvin) and wife (Pattie) both having served as county commissioners.

Retiring Clerk of Court Michael Huneycutt is shown with his wife, Pattie, during a retirement celebration Thursday afternoon. (Photo by TOBY THORPE)

“I had been involved politically for 25 years, and spent much of that time as the treasurer for the Stanly County Republican Party,” he said. “And I became interested in running for the clerk’s office when it came open” (upon the retirement of previous clerk David Fisher).

The duties and responsibilities required of the clerk of court stretch far beyond what many citizens know, said Huneycutt.

“The average person doesn’t realize just how much we (clerk of court’s office) are responsible for,” said Huneycutt. “Many people first learn about these when life situations require them to use the system.”

Huneycutt noted a number of these situations, including adoptions, probate and estates, divorces and coordination of jurors, to name a few.

“So much of what we do affects so many people’s lives,” he added.

Foreclosures and competency hearings are part of the clerk’s duties, and were often a stressful aspect of the job, according to Huneycutt.

“Sometimes the only difference between a person being foreclosed on and me was the fact that I was getting a paycheck and they were not, and I would have to sign off on a decision that would determine if a person was able to keep his or her property,” he said.

“Same with a competency hearing,” he added. I was involved in deciding whether or not a person would have his or her rights taken away.”

On the flip side, facilitating adoptions was the part of the job Huneycutt said he enjoyed most, in addition to assisting the public in general.

“We have really good working relationships with our citizens, with co-workers, and with other departments,” he said.

“It’s been an honor to work for him,” said Assistant Clerk Martha Newton-Aldridge. “He always had our backs.”

Both Newton-Aldridge and Lewis recounted that on the first Monday of December each year (the anniversary of when Huneycutt took office in 2006), the entire staff observed the start of the day with a Cheerwine, a Reese’s cup and a Bojangles biscuit, provided by the clerk.

“We’ve already done it for this year,” added Lewis, “because he’s retiring on Nov. 30.”

And, although not a member of the clerk of court staff, Family Court Administrator Tennelle Hann was quick to add, “Mike has been very easy to work with over the years; we hate to see him go.”

Clerk of Court-elect Ginger Efird has worked in the office since Huneycutt came on board.

“I’m fortunate to have been here all 16 years of Mike’s term,” she said. “I’ve watched him grow and have learned from him at the same time. I look forward to continuing the success he has brought to this office.”

“We will make him proud,” she added.

As for future plans, Huneycutt listed cleaning out and re-organizing his shop as an immediate goal, in addition to helping his brother (Kevin) at Quenby Auto and keeping his farm up and running.

“This job has been a challenge since day one,” said Huneycutt, “and I’ve enjoyed the challenge. “It’s been quite an adventure.”