During its meeting Monday night, the Albemarle City Council renewed discussions that had last taken place over the summer regarding a decision on the city’s proposed stormwater program.

Having recently received $250,000 in funding from the Golden LEAF Foundation to assist with a portion of the city’s proposed stormwater management program planning, which will be used for a watershed study of Little Long Creek, there was urgency among the council to work to implement the program by July 1, the start of the new fiscal year.

In order to provide Ross Holshouser, public works director, and his team enough time to re-engage its consultants, including WK Dickson, a Charlotte-based community infrastructure consulting firm, Raftelis, a Charlotte-based management consulting firm and ElectriCities, among others, to restart and complete the data migration for utility billing (the process will take a minimum of four months), a decision has to be made no later than Jan. 9, 2023.

“We have got to get our consultants back on board with utility billing,” Holshouser told council. “There’s a process that’s going to take place for us to go live, if we go live on July 1, 2023.”

During a July workshop, Council initially wanted to have more discussions about moving forward with a stormwater program and make a decision in September or October, but those never materialized.

It was decided Council would have a final public hearing at 6 p.m. Jan. 3, 2023, regarding the stormwater program. A letter will be sent to residents and nonresidents about the public hearing.

Following the hearing, Council would then make a decision on the stormwater plan at its meeting on Jan. 9.

The city has been working with WK Dickson since February 2021 about developing a stormwater management program to address residents’ concerns about flooding.

The original plan in January was to budget for a monthly flat fee of $11.50 and have the stormwater program, which would cost about $2.2 million, begin July 1. After several residents expressed concerns about the fee structure during a May public input session, Council worked with WK Dickson to adjust the program.

The scaled-back cost of service plan presented to Council in July totaled $1.16 million, with a monthly fee of $5.80.

In order to achieve the reduced monthly rate of $5.80, service levels were reduced. Each of the five components, including operation and maintenance and capital improvements, were slashed considerably. 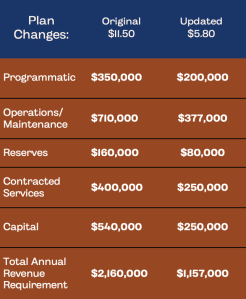 The revised proposed stormwater plan, if passed, would cost $1.16 million, a notable decrease from the $2.16 million originally.