REGIONAL: Instinct led a Charlotte man to buy a lottery ticket worth $100,000 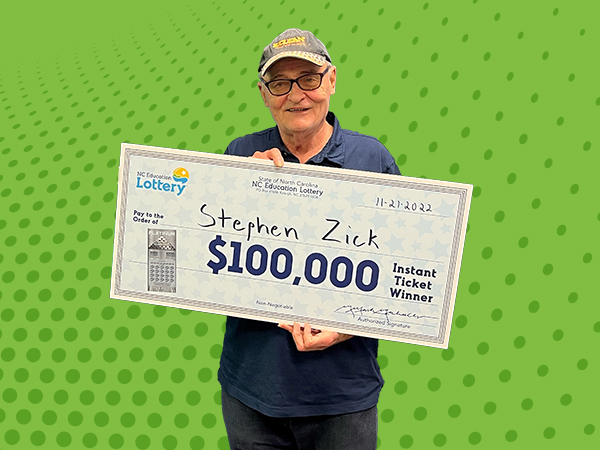 RALEIGH – Stephen Zick of Charlotte felt a sudden urge to buy a scratch-off so he listened, leading to a $100,000 lottery win.

“I was ready to leave the store but something just stopped me and told me to buy a ticket,” he said.

Zick, 76, said he stopped at the Food Lion on Mt. Holly-Huntersville Road in Charlotte to pick up a few things for his sister when he decided to buy his $20 Platinum ticket.

“When I scratched it, I saw I won something but it wasn’t until I got home and my sister told me that I realized how much it was,” Zick said. “I thought she was kidding.”

He collected his prize at lottery headquarters Monday and, after required state and federal tax withholdings, took home $71,016.

“All I know is now I can get what I want,” he said. “I really never expected that.”

Zick said he would give some money to his family and some to St. Jude Children’s Research Hospital as well.

Ticket sales from scratch-offs make it possible for the lottery to raise $2.5 million a day on average for education. For details on how $62.6 million raised by the lottery made a difference in Mecklenburg County in 2021, visit www.nclottery.com and click on the “Impact” section.