The Administration Building on Pfeiffer’s Misenheimer campus was renamed Jerry and Evon Jordan Hall and dedicated during an outdoor ceremony on Nov. 4.

The ceremony, which was attended by the Jordans, their children and university faculty, staff and students, honored the Jordan’s generosity to Pfeiffer.

“We appreciate all the people here today who took their time to come here on a Friday and be with us,” Jerry Jordan said at the ceremony. “You’re all very special to us. We see a lot of faces out there that have meant so much to us over the years. We thank you for coming. We thank you for being here and sharing in what is truthfully a very, very special time.” 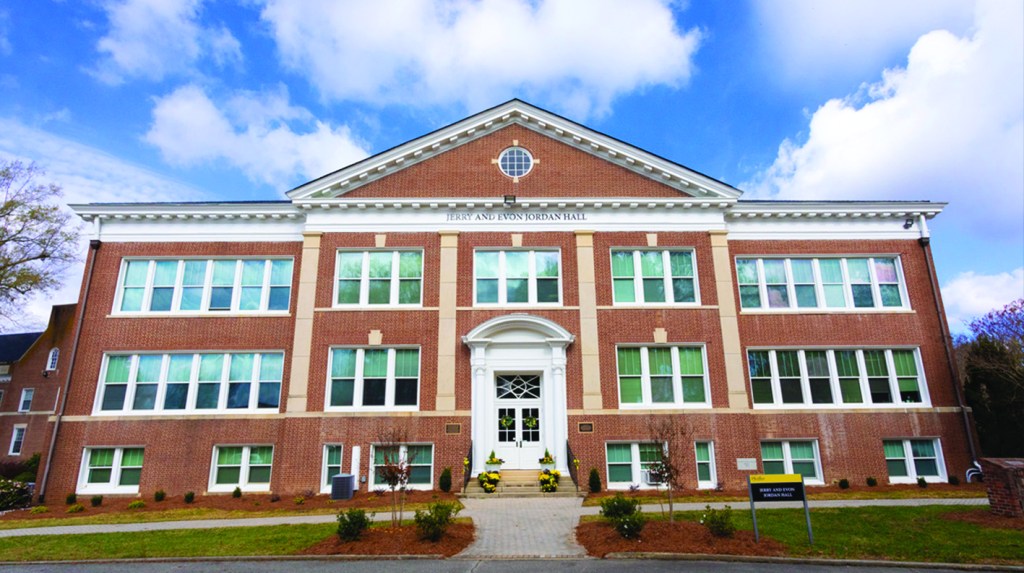 The Administration Building on Pfeiffer University’s Misenheimer campus was recently renamed Jordan Hall in honor of Jerry and Evon Jordan and their contributions to Pfeiffer. (Contributed)

The dedication’s speakers thanked the Jordans for their generosity and emphasized the many positives about the Pfeiffer experience that it has helped sustain.

University President Dr. Scott Bullard told several stories about how Jerry and Evon Jordan Hall is the site of many interactions at Pfeiffer that make a difference in the lives of its students.

Bullard recalled that in the early days of his presidency, an alumnus of the early 1980s asked how he might help the university with a significant donation.

The alumnus shared that Dr. Cameron West had stopped in the hallway, asked how he was faring, invited him into the president’s office and ultimately made a phone call to lobby for his law school admittance.

“I said, ‘Phil, why do you want to make a gift?’ ” Bullard said. “And he said, ‘Because someone stopped what they were doing for 10 minutes and changed the entire course of my life.’ ”

Bullard reminded the Jordan family and guests that these sorts of transformational moments happened long before the 1980s and that they continue to happen frequently.

Dr. Christopher Bramlett, a Pfeiffer trustee emeritus and owner of Starnes Bramlett Jewelers who spoke at the ceremony, is a long-time friend of Jerry Jordan.

“Jerry has been successful in everything he’s done,” Bramlett said. “During all those years, though, I wasn’t really aware of his great generosity.”

When Bramlett became part of a group tasked with raising money for building Pfeiffer’s Center for Health Sciences in downtown Albemarle, one of the first people he called was Jordan.

“The next day he brought me a check,” Bramlett said. “A couple of weeks later, Jerry Jordan brought a check for much more than the first one.”

The Jordans also gave Pfeiffer the property that serves as the university president’s home, as well as other gifts of real estate.

He said the Jordans share and support Prudden’s “hope and vision that her schools would teach and develop students that would lead lives of useful service.”

The university “is continuing to fulfill her vision and mission by preparing our students for a lifetime of achievement, scholarship, spirituality and service, creating leaders for our future that are driven by worthy purpose, motivated to be servant leaders,” Dick said.