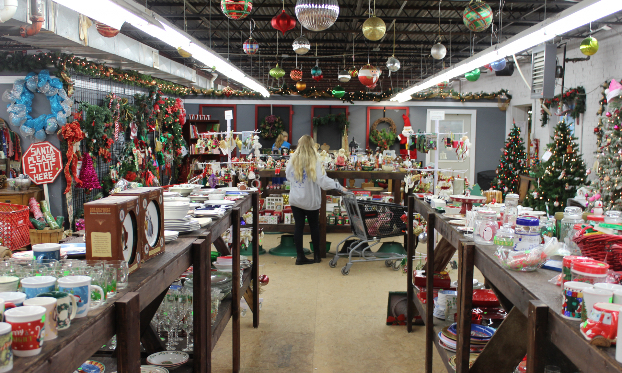 West Stanly Christian Ministries' Christmas room has been a staple in the community for many years.

More than 60 people eagerly waited in line in Stanfield for the thrift store, operated by West Stanly Christian Ministries, to open on the morning of Sept. 24. The excitement in the air was palpable, like the feeling one gets waking up on Christmas morning.

And that was exactly the point, as that day marked the opening of WSCM’s well-known Christmas room, a place people can shop for all sorts of holiday decor from Santa figurines, wreaths and ornaments, to stockings, mugs, plates and stuffed animals.

The opening of the room, which totals about 2,500 square feet, signals the beginning of the holiday season for many in the community.

“People look for it and people start calling us in August, asking when the Christmas room will be open,” said WSCM executive director Robert Britt, noting the line on opening day this year stretched to the parking lot. “The anticipation is incredible.”

“When you open it up, the room fills up with people,” he added. “It’s just crazy how busy it gets.”

It makes sense why people are so passionate about the space. The room serves as a lifeline for customers, eager to get a head start with their Christmas shopping, who might not have the ability to shop at larger retail stores, where items would typically be more expensive.

“I love the Christmas room because you can get anything here,” said Concord resident Jane Downes, who has been coming to the thrift store during the holidays for the past 15 years. “And when you’re on a fixed income, you can get really nice things for a reasonable price.”

During her most recent trip, in late October, Downes discovered a 500-piece Cobble Hill holiday puzzle that would normally cost about $20, but at this store it was only $2. 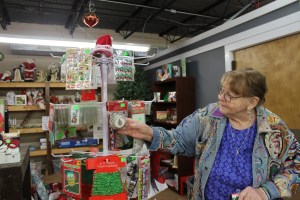 Jane Downes has been shopping at the Christmas room for the past 15 years.

It is both the quality and the diversity of the items — holiday-themed dinner plates, part of the Norman Rockwell Collection, were recently on sale for $10 — that have kept customers coming back since the Christmas room stared in the late 1990s, shortly after WSCM was founded in 1996. The thrift store is at 100 S. Love Chapel Road in Stanfield.

“To my knowledge, the Christmas room has been a part of the ministry since we had a thrift store operation,” said Britt, who has been with WSCM since 2013.

As much as the thrift store is a revenue generator for the organization, it is also a key outreach opportunity to connect with and help local families. And the Christmas room is a big part of that.

“At our core we’re a crisis assistance ministry, that’s what we do, and the thrift store provides about 85 percent of our budget,” Britt said, noting the funds derived from the store, including from the Christmas room, allow the organization to be able to serve the community in numerous ways, including its annual Day of Giving campaign.

The room generated enough revenue last year, for example, for WSCM to cover all the expenses for its Living Again Internship, a program where people who have graduated from a recovery program can come and work alongside staff to earn income, work on life skills and build a strong community around them to help them find success in their new sobriety, Britt said.

“I come in here and I feel like I’m used, I feel like I can meet and greet and it’s just wonderful,” said volunteer Karen Morton. 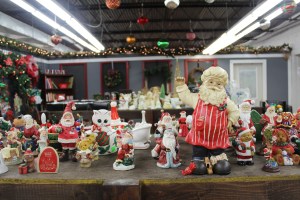 The Christmas room has a variety of holiday merchandise including several Santa Claus figurines.

The large majority of Christmas items donated to the store arrive shortly after the holiday season, during the first few months of the year, though staff and volunteers continually collect donations as they come in. The items are boxed and left on pallets in the basement until around September, when the room, which is usually a space to sell furniture, transforms again for the holidays.

“Just on the volume, when we started this year, I think we had around 50 pallets of Christmas merchandise,” Britt said, “and as of today, we have 20 pallets worth of merchandise that we still have to work through.”

The most common items collected each year include wreaths, artificial Christmas trees, nativity scenes and holiday clothing, including sweaters and socks.

While WSCM staff members, including Britt, oversee the Christmas room, there are many volunteers who spend their time each day pricing the inventory and making sure shelves continually get restocked.

“We’re just trying to work through each pallet one at a time,” said volunteer Dianne Williams.

“Our volunteers really do drive the Christmas room,” Britt said, noting a few hundred people help out at some point during the season, though only about 10-12 work each day. 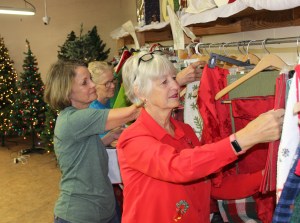 Since the shelves are constantly being restocked, even if people don’t come out during the first 30 days, which is usually the busiest stretch, there are still plenty of items to be purchased throughout the season.

“Because of the way we keep our stuff year-round, there are as much great merchandise going out today as there was opening day,” Britt said. “There’s never a bad time to shop.”

The Christmas room has become an institution during the holidays for many loyal customers, several of whom come from outside Stanly County to find a good deal. A tour bus of 50 senior citizens from Lincolnton, more than an hour away, came to shop at the store a few weeks ago.

Michael and Wanda Allred are among the thrift store’s most dedicated customers. Every Friday for the past three years, the couple make the 60-mile drive from their home in Robbins, in Moore County, to the store. They shop in the morning, have lunch in Locust and come back to the store in the afternoon before heading home.

“We found out about this place through a patient of ours,” said Wanda, who used to work in the dental field. “Her mother lived in Locust and she told me about the thrift shop.”

“We take a lot of stuff up there because we know that it’s going to such a good cause,” Wanda said.

For the people who work there, the Christmas room represents much more than a shopping haven for customers.

“Sometimes when you get on the other side, it really just helps you remember what Christmas is really all about,” he said. “It’s really not all about the decorations, it’s about the people.”

“There’s just something about being here, being with the customers and finding that special something that somebody is looking for…it just makes me feel good,” said Dianne Williams.

The thrift store, including the Christmas room, is open from 8 a.m. to 4 p.m. Monday through Saturday.