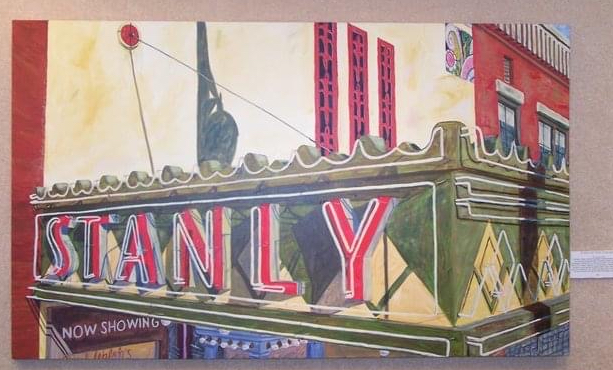 The popcorn machine that ADDC is trying to purchase used to be housed in the former Stanly Theatre building. Photo courtesy of John Williams.

The Albemarle Downtown Development Corporation is organizing a fundraiser to help reclaim a piece of the city’s history.

The organization is looking to secure $3,250 to purchase the original popcorn machine from the old Center Theatre, located on West Main Street in downtown Albemarle. A GoFundMe page has been set up to aid in the efforts. As of Tuesday afternoon, $325 has been raised.

“We would love to reclaim this piece of our city’s history and have it up and running again for the public to enjoy,” according to the page.
John Williams, former North Stanly High arts teacher and the ADDC’s design chairman, did not think much about it a few weeks ago when ADDC director Joy Almond sent him an image of a popcorn machine that was for sale on Facebook Marketplace, until Almond explained its significance.
“She said, ‘We need to bring this thing back,’ and I said, ‘Well that’s really cool,’ ” he told The Stanly News & Press, noting the building that housed the theater “is my favorite building in the entire town.” 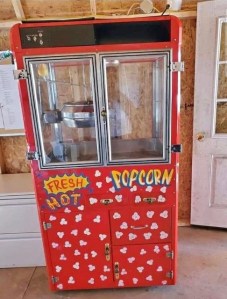 ADDC is trying to raise about $3,200 to purchase the popcorn machine. Photo courtesy of John Williams.

While the former theater is now vacant, with old newspaper articles covering the front, it “was a movie palace when it first opened in 1930” as the Stanly Theatre, Williams said, adding that with its barrel vaulted ceiling in the foyer, white tile fireplace in the lounge and red velvet for the curtains, seats and ropes, it was a “gorgeous piece of architecture.” The theater held 661 people when it opened on Dec. 19, 1930, Williams said.

The Stanly Theatre burned in February 1947, though only the projection room and balcony were damaged. It opened back up a few months later in April.

In 1968, the theater was remodeled and given a “modern face life,” Williams said, as it transitioned from the Stanly Theatre to the Center Theatre, where it remained open for many years. It closed in the 1980s as it could not keep up with the new Eastgate Cinemas. Since then, the building has been used for several purposes, including at least one church and for storage for a furniture company.

Once aware of the situation, Williams called Lisa Williams, the woman trying to sell the machine on behalf of her father, Rodney Barringer, who owns it, about ADDC’s interest in purchasing it. He learned that Williams, who lives in South Carolina, was the granddaughter of Willie Barringer, an electrician who worked for former Albemarle mayor Roger Snyder, who owned The Boardroom Bar and Bistro, the space that is now Tiffany’s At The Boardroom. The popcorn machine was restored shortly before the business opened in 1999.

John Williams, who helped design the boardroom for Snyder, said the former mayor had designs on purchasing the old theater but could never make it happen.
“I’m not sure if he bought the machine because of that (his interest in the theater),” Williams said.
According to Lisa Williams, Snyder’s wife Margaret gave the popcorn machine to Barringer.
The machine cost $6,000, though after speaking with Roger Dick, president and CEO of Uwharrie Capital Corp., “who was very passionate about it,” Williams said, the bank put down a deposit to pay for half the cost. Several individuals associated with Uwharrie made some donations.
“We’re just hopeful and excited to bring a piece of Albemarle’s history back to town,” said Uwharrie Bank Chief Operations Officer Jason Andrew, who is also chairman of the ADDC.
The ADDC is still looking for a place to store the machine, should it raise the necessary funds, and wants to incorporate the device for all major downtown events.
“There’s a lot we have to work out, in terms of the logistics of the whole thing,” Williams said.