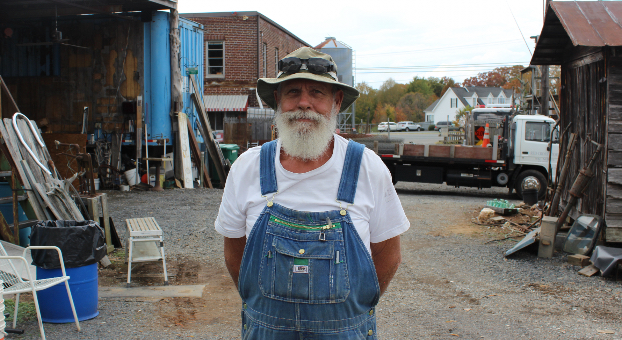 Mike Hinson has operated his business in Red Cross for more than 30 years. (Photo by CHRIS MILLER/staff)

Within his sprawling three-acre kingdom at the corner of N.C. Highway 24-27 and South Oak Ridge Road, heaps of vintage memorabilia — ranging from car tags and old signs to car parts and gas pumps — are strewn about in a haphazard maze of stuff most people would consider junk.

But for Mike Hinson, the mild-mannered owner of the Red Cross Store and a self-professed “junkaholic,” each piece has value — either to him as a collector or, he hopes, to prospective buyers, as he has been a constant presence over the years at flea markets and antique shows across much of the East Coast.

Not having a website or any kind of social media presence and generally not open to the public (much of his business has been through antique shows), Hinson’s store has always been a source of keen fascination for passers-by.

“People come to me all the time saying, ‘I’ve been driving by this place for 30 years and the gates are never opened’ or ‘What is this place?’ ” Hinson said in a recent interview with The Stanly News & Press, noting some people have even asked if it was a museum.

Similar to when the enigmatic Willy Wonka finally opened up his mysterious chocolate factory to the public, Hinson likewise pulled back the curtain on his business last month when he invited people to his property as part of a three-day estate auction. More than 400 people showed up, he said, including from as far as Virginia and West Virginia, and purchased all kinds of items, with the assistance of Ramseur-based C & A Auctions. 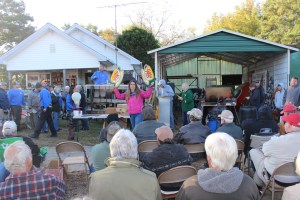 Hinson also sold his land. He and his wife Ellen Harris have to be off the property by the end of the year.

Since not all of the items were sold in October, a second auction will be held Dec. 3-4, beginning at 9 a.m.

Though Hinson would not disclose specifics, he said he was “very happy” with the auction, noting “it brought in more money than we thought.”

Inheriting the property from his family

Always an avid fan of antiques, Hinson first started collecting electric motors when he was a young kid growing up in Oakboro.

“I’ve always liked old stuff,” he said, noting he got the interest from his grandfather Dan Hinson.

His grandfather owned a two-story brick building on the property, which was built in the early 1930s, and was a popular general store. At the time, Hinson said, it was one of the largest buildings between Albemarle and Charlotte. He also bought several farms in the area.

Hinson recalled his aunt, Joyce Hill, had a few interactions with Gen. George S. Patton, before the United States entered World War II, where he would go on to become a household name in leading the U.S. 7th Army in its invasion of Sicily and playing a key role in defeating the German counterattack in the Battle of the Bulge in 1944.

“She said he wasn’t famous then, but it was really something to see a general,” Hinson said.

The building was later turned into a hosiery mill and later was rented by Stanly County Schools’ maintenance department. It is now largely vacant, except for a place of storage for the many items Hinson has collected over the years.

Once Hinson’s grandfather died, the property was divided between his three children, including Hinson’s father J.D. After three years in the military, Hinson came home to help J.D. Hinson sell tomatoes he grew in his greenhouses. His father had also owned Hinson’s Esso Service Station in the late 1950s, which Hinson remembered as a young child.

“He was a good man,” Hinson said of his father, who died about eight years ago. “I was so lucky to have him as a father.”

Hinson took over the family house in 1975. Following a five-year stint in the 1980s, when Hinson and Ellen traveled back and forth across the country as truck drivers, he purchased the brick building and opened his antique business in 1988.

Hinson views his role as more of a caretaker, as the property was passed down to him.

Over the years, as he was growing up, Hinson continued to collect all kinds of items, including North Carolina license plates dating back to the early 20th century, toy cars, insulators and all sorts of signs representing iconic long-ago brands such as ESSO, Texaco, Sinclair and Gulf. He amassed such an eclectic array of stuff that, even though much of it was sequestered in trailers and the brick building, it nonetheless flooded the property.

“I specialized in country store collectibles,” he said. 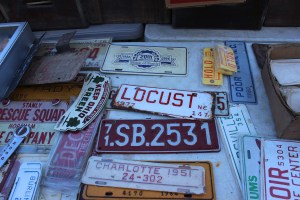 Mike Hinson has collected all kinds of license plates over the years. (Photo by CHRIS MILLER/staff)

Without necessarily dealing directly with the public (though he was open on Sunday afternoons), word of mouth about his business tended to spread among avid collectors that he met during shows, from Florida up to Pennsylvania.

He eventually learned that, in order for his business to be successful, his paradigm had to change from collecting only what he loved to thinking about items other people would want to purchase.

“I did find out in my business, it is not what I like, it is what sells,” he said. “And I had that problem because I wanted to buy what I liked and that is why we ended up with so much.” 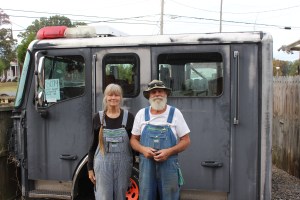 His business received a massive boost about 12 years ago when he was featured on the television show “American Pickers.” In the series, which airs on the History channel, the hosts travel across America in search of rare artifacts and national treasures that they can buy from the collectors to add to their personal collections or sell in their antique shops.

“The guy’s got just a huge collection of just about anything,” said  Mike Wolfe, one of the hosts.

In the second season episode, the hosts highlighted several items Hinson had purchased over the years, including an Austrian-made motorcycle, known as the Twingle, and a hanging fire extinguisher.

“They came out here and interviewed us and it was the best advertising money could buy,” he said. “Boy, that gave me world-wide exposure.”

The show led to a surge of interest among prospective customers nationwide who had watched the episode.

“I got calls from all kinds of people,” he said. 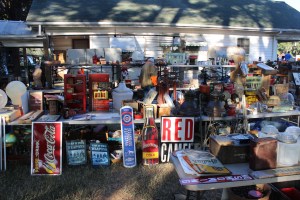 Mike Hinson has accumulated all kinds of signs over the years, many of which were sold last month at the estate auction. (Photo by CHRIS MILLER/staff)

Hinson never takes offense with how people might view the items and memorabilia he has accumulated on his property.

“We call it good junk,” he said, noting he once had an advertisement featuring “Mr. Mike’s real junk.”

Hinson has always enjoyed his conversations with people who would stop by the business, often out of curiosity about what was going on.

Even if they did not care about antiques or did not buy anything, he appreciated their interest because they could help spread the word to others.

“I know they could tell somebody else about us,” he said. “I was planting seeds.”

Selling his property and looking to the future

Mike and Ellen had thought about selling the business for several years but had never pulled the trigger.

That changed when Hinson’s best friend died a year ago and left him his estate. Going through his friend’s belongings, Hinson began to seriously reflect on his own life.

“Once my friend died, boy that laid real heavy on me,” Hinson said.

His passion of collecting had turned into a bit of a burden since his friend died and without any children to pass on his business to, Hinson decided the time was right to open the gates of his kingdom to the public for the auction. He had also finished building a new home a few miles away, which hastened the need to sell the property.

Still, it was not an easy decision to sell property that had been in Hinson’s family for much of the past century. It was an emotional time for Hinson and Ellen during the weekend of the auction, especially when Hinson’s father’s red Ford pickup truck was sold.

“We cried so bad we had to come in the house,” he said.

Through it all, the couple was appreciative of so many people coming out and be willing to purchase many of the items that Hinson has spent decades collecting.

“We did have a lot of people that thanked us for letting them come here and buy our junk,” Ellen said.

Looking ahead, Hinson plans to continue collecting and going to antique shows, though he will not be as active as he had been. Other than that, he and Ellen are still figuring out what life will look like for them.

“People have been asking me these past few weeks, ‘What are you going to do?’ ” he said, to which he has replied: “I don’t know.”

In the meantime, Hinson is savoring his last remaining weeks on the property, surrounded by the few trinkets and knickknacks that have not yet been sold, including a 10-foot hand-made piece of scaffolding, built from a pallet rack, which he calls his perch. Enjoying the quiet moments in life, towards the end of the day, he often relishes climbing the top of the structure to watch the sunset. 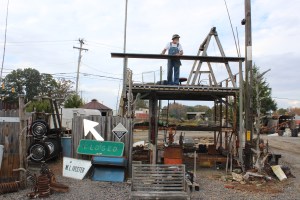 Mike Hinson, on top of scaffolding, examining the remains of his kingdom. (Photo by CHRIS MILLER/staff)