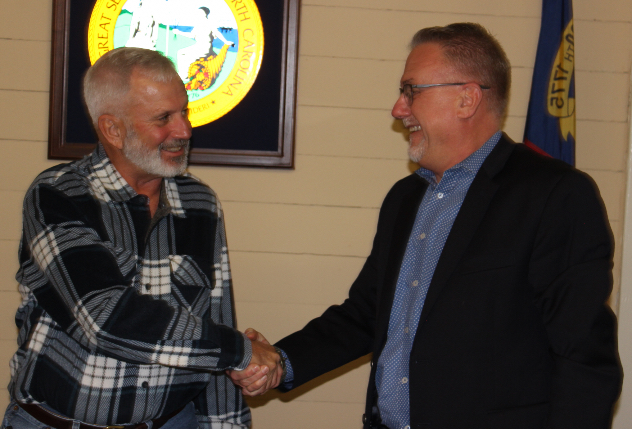 It was a changing-of-the-guard moment at Stanfield’s town council meeting Thursday night as Kevin Barbee, after almost two decades as mayor, passed the baton to James Kluttz, the town’s mayor pro-tem who had been on the council for four years.

Having first been elected in 2005, Barbee, a Stanfield native who turns 65 later this month, served for 17 years, the second-longest stint in the town’s history, behind Pete Henkel, who was mayor for 19 years.

He first decided to pursue the office after his friend, Randy Whitley, offered up a challenge: He would run for town commissioner if Barbee would run for mayor.

During a party at Love’s Chapel United Methodist Church celebrating Barbee’s tenure a few hours before the meeting, Barbee held back tears as he described what his time as mayor meant to him.

“I’ve been nothing but blessed for 17 years to be around people that care about other people and that want to make a difference,” he said, adding that he has made lifelong friends with many of the town’s employees, whom he called “exceptional.”

With the numerous accomplishments he helped preside over during his tenure, whether it be expanding Pete Henkel Park or improving the town’s financial situation, he emphasized it was always about doing what was best for Stanfield and its citizens.

The party also featured numerous humorous stories from his family and close friends, including a “Kevin”-themed bingo game, where people had to shout his first name when they won, echoing the famous scene in the Christmas movie “Home Alone.”

In deciding to step away and not seek reelection, Barbee said the town needed a leadership change to avoid becoming too stagnant. Barbee talked with Kluttz in advance about succeeding him. Kluttz ran unopposed for the mayor position last month, receiving 508 votes.

“We owe you a tremendous amount for your leadership and for your service for the town of Stanfield,” Kluttz told his predecessor during the meeting. “And trust me: We will continue to call upon you to seek your guidance and wisdom.” 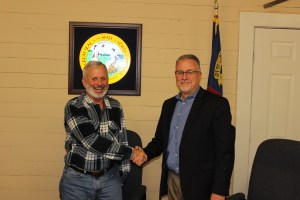 In recognition of his service and leadership, Kluttz presented Barbee with a shadow box, which included the wooden gavel Barbee used to control meetings, along with a picture of him and the commissioners, the North Carolina seal and the Stanfield train logo. 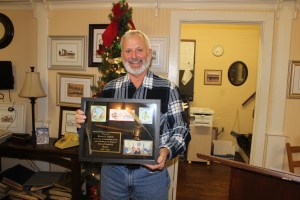 Kevin Barbee was presented with a gift in recognition of his 17 years as mayor.

After a few pictures and hugs, Barbee left the council meeting as a private citizen as Kluttz was officially sworn in as Stanfield’s 13th mayor.

• Commissioners Brent Holbrooks and Greg Bratton were sworn in after winning reelection, as was Greg Lucas, who previously served on the council for a decade and was elected last month as a write-in candidate.

“I’m honored to serve the town of Stanfield,” said Lucas, who also was named mayor pro-tem.

• Council voted to request that the state terminate the $650,000 N.C. Highway 200 sidewalk project, which would have expanded sidewalks from North Love Chapel Road to Locust city limits, due to the likelihood of increased costs as a result of inflation. If the project went through, Stanfield would have had to pay 20 percent of the total project, or about $135,000.

• The town’s first school resource officer, Kinsley Fore, was sworn in on Thursday and will start her tenure at Stanfield Elementary School on Monday.