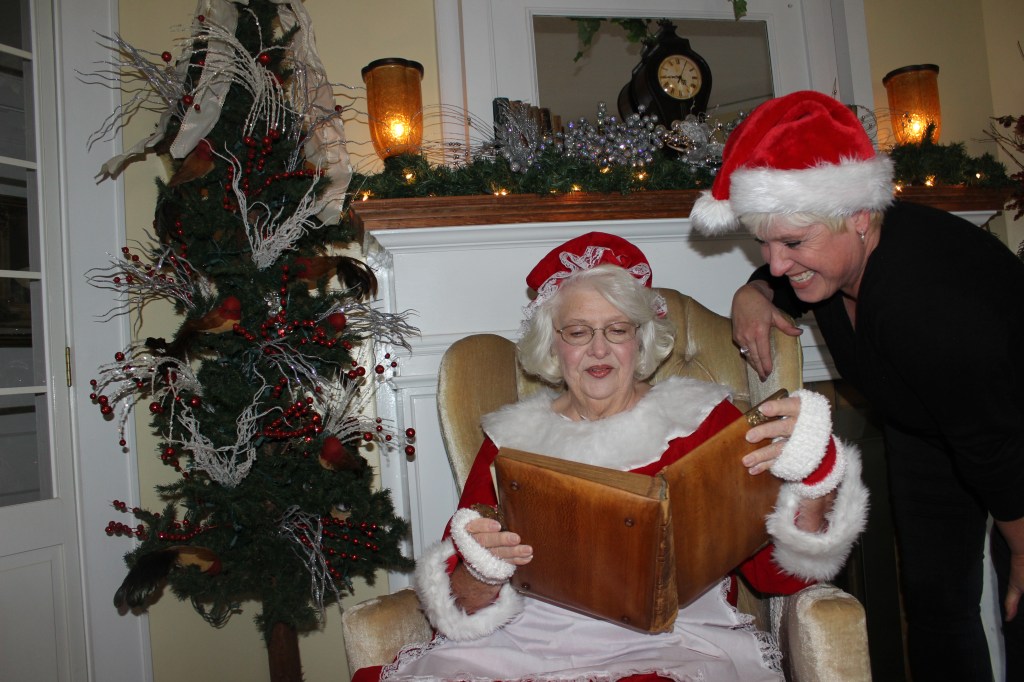 Mrs. Claus, aka Diane Jordan, and her daughter, Ingrid Wyrick. The wooden book Jordan is holding is a vintage piece that belonged to her grandmother. (Photo by CHRIS MILLER/staff)

It is a perennial sentiment echoing through the aisles of big box stores from late September on.

By now, Christmas cards made from family beach trip pictures are waiting to be mailed, and children’s wish lists are waiting to be filled. Brown cardboard boxes of in-demand toys, games and gadgets arrive daily on doorsteps all over Stanly County.

One Albemarle resident recently opened a Christmas box before Christmas.
She’s a member of an exclusive club of mostly anonymous women and men who will soon begin popping up at malls, parades, children’s hospitals and tree-lightings wearing head-to-toe garb in various shades of red.

Known around town as Diane Jordan — Nana to her grandkids — she’ll soon don her newly purchased velvet dress complete with white fur trim, and voila! She’ll be somebody else — the beloved Mrs. Claus.

Jordan’s “Mrs. Claus” first appeared in 2013 at The Marketplace Vintage Store because owner Christy Wood called on Jordan to fill the role at a seasonal event for her customers. As they say, the rest is history.

“She is the most loving and sweet spirited lady I have ever met,” said Wood. “She was a perfect Mrs. Claus for us for many, many years and with more to come.”

For 14 or so years, Jordan and her daughter, Ingrid Wyrick, have managed their vintage booth, Southern Style Clutter, at The Marketplace, and now have a booth at White Owl Antique Mall in Mount Pleasant.

The mother-daughter duo spends a lot of time stocking both locations.

“We travel every direction and collaborate on new ideas to change things up a bit,” said Ingrid. “Mom is my Wonder Woman image. A Christian woman with a heart of gold, and the glue to our family.”

Christmas has always been Diane Jordan’s favorite time of year because of the birth of Jesus. Family traditions still include reading the Christmas story from the Bible on Christmas Eve, a birthday cake for Jesus and lots of Christmas music. She also recalls the classic “Twas the Night Before Christmas” was a favorite of her kids and grandkids.

From the start, this new tradition of being Mrs. Claus has included Ingrid as helper.

“She is truly my best friend,” says Jordan.

Ingrid encourages the children to talk to Mrs. Claus, she greets and chats with parents or takes pictures as needed. Ingrid also watches as children sit in Mrs. Claus’s lap or stand next to her for a picture, noting the compassion and sincerity shown to the children.

“She listens and writes down what they wish for and gives them mini-candy canes to enjoy while walking around the store with their parents.”

Jordan thinks for a moment, then recalls that the children’s lists over the years have included Tonka trucks, dolls, tricycles, bicycles, action figures, Legos, go-carts, pets — even a pony.

“Of course, the children from my church always recognize me,” she says.

The rest of the year, grownups from all over the county may recognize Diane Jordan as a charter member of Stanly County Singing Americans, or as a friendly face in Atrium Health Stanly’s Cheer Shop, where she works several times a month. Even when she’s not with people, she’s cheering others from a distance by sending cards to shut-ins, to people who’ve been sick or just need to know they’re thought of.

“My mom sends more cards than anyone I know,” said Ingrid, “to include family and close friends for every holiday.”

Back before Covid showed up, Atrium Stanly had a Christmas party for medical staff and their families in the hospital’s Magnolia Room where Mrs. Claus again spread her special brand of cheer.

“I’m a people-person,” says Jordan, an obvious fact to everyone she meets.

All Christmas-loving grownups and children are invited for refreshments, picture-taking and making Christmas memories with Mrs. Claus.