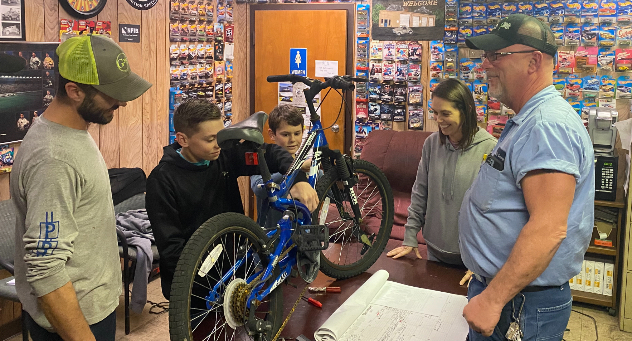 Each year in early December, Doug Arey, owner of Doug’s Garage in Albemarle, gets busy receiving requests from people in the community seeking a very particular type of assistance, which usually has nothing to do with auto repair. One woman, for example, recently called him needing help putting together two bicycles.

It is during this time of year when his auto repair shop, at 545 Snuggs St., turns into a workshop, where people are encouraged to bring in toys that Arey and his employees will assemble before picking them up in time for Christmas. Though the service is free of charge, donations are accepted and given locally to people in need.

Arey came to work at the business, which was originally named after another Doug, in 1999 and became owner in 2006. He estimates he opened the so-called “Santa’s Workshop” a few years later.

“Just the thought came into my head to help people and that is what I like to do,” he said. “I just enjoy putting things tougher. I just do. I always have.”

He has assembled numerous items over the years for individuals, most often parents who may not be mechanically inclined, including all kinds of bikes, Hot Wheels model cars and tracks, dollhouses (including a three-story one), basketball goals and even a large metal swing set. At the operation’s peak in the mid-2000s, Arey estimates he assembled as many as 50 toys in a given year.

“We’re basically the elves putting all the items together,” said Arey’s son Landon.

Arey and his many elves, including Landon, Arey’s daughter Ashley Smith and her sons Henry and Titus, plan to spend all day Dec. 23, when the shop will be closed, assembling the toys they have collected. Landon’s friend Scott Vanderburg, youth pastor at Charity Baptist Church in Albemarle, said he wants to enlist some young people at the church to also help.

Arey’s workshop has become such a fixture within the county that children who were once on the receiving end of toys he put together are now the parents coming to him to help assemble toys for their own kids.

He appreciates that the workshop is very much in line with the values that have carried his auto repair business over the years: being truthful, honest and caring about people.

Beyond helping the people in need of assistance, the operation has also greatly impacted Arey’s family, especially his children, who take great pride in knowing their father plays a key role for so many families during the holiday season.

“There’s just so many levels of how you can bless someone without them really knowing they’re being blessed,” Smith said.

The assembled toys will need to be picked up no later than noon on Dec. 24.