‘It is a labor of love’: Model trains on display above Albemarle Music Store still a popular destination 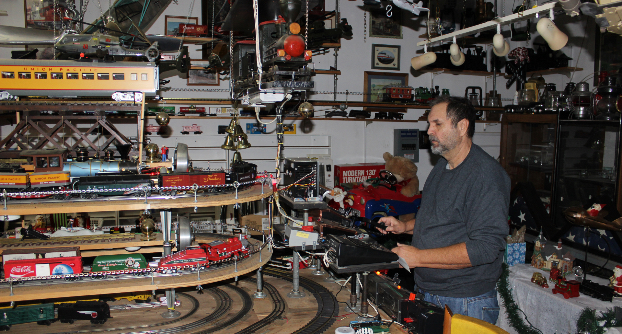 Jimmie Cox operates the many model trains above the Albemarle Music Store.

When one enters the second floor of the Albemarle Music Store for the first time, it can be a visual overload as around every turn, there is so much that attracts the eye. There are around 18 to 20 model trains of all sizes and colors, representing Amtrak, Union Pacific and even North Pole Central, among others, along with tons of airplanes and lanterns hanging from the ceiling.

It is a wonderland for not just train enthusiasts but for people of all ages, especially young children watching as the trains move along the 14 tracks for the first time.

“I just enjoy it because there are so many of them,” said volunteer engineer Jimmie Cox, who has always had a passion for model trains. “Every time I come up here I see something different — I see a different train. It’s hard to take it all in at one time.”

Cox is one of several volunteers who have operated the trains over the years, especially during the Christmas season, when hundreds of people come out to see the trains.

“The kids love them,” he said. “Their eyes just brighten up — and the adults, too.”

The vast collection of trains and other memorabilia, including a landscape of downtown Albemarle with numerous recognizable model buildings such as the music store and the old Albemarle Hotel, has been an integral part of the fabric of downtown Albemarle for more than 30 years. And it was all started by Albemarle native Jimmy Brown, who passed away in 2010. 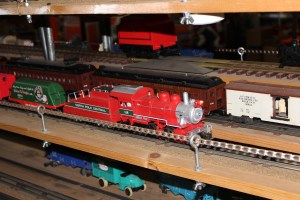 There are all kinds of model trains above the Albemarle Music Store, including a Christmas-themed one: North Pole Central.

James “Milt” Brown opened Albemarle Music Store nearly 100 years ago in 1925. It moved to its current location, at 235 W. Main St., three years later. The business was eventually passed down to Brown’s son Jimmy, an acclaimed saxophone player who played in venues across the Southeast.

It was not until the holiday season in 1990 when Jimmy Brown first thought about model trains, as his young daughter Jennifer asked for one to move around the family’s Christmas tree. Brown purchased several HO scale trains, which zoomed across the floor.

But he did not stop there. What started as a gift for his daughter turned into a passion as Brown accumulated more and more model trains, many of them Lionel products.

“He just fell in love with them,” said his wife Carole Brown.

Brown eventually housed his collection on the second floor of the music store. He built tables to house the tracks and little by little, the room exploded with all sorts of model trains, airplanes and lanterns. He purchased many of his trains from a distributor in Monroe, while others were donated by people in the community.

“We closed on noon on Wednesdays and we went and got trains,” Brown said, noting that her husband eventually became a Lionel dealer. 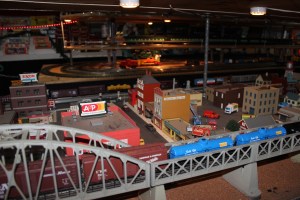 Several of the trains pass through various landscapes, including one of downtown Albemarle.

Word quickly spread about the collection, as local schools visited on field trips and starry-eyed children arrived with their parents. People also flocked to the store to purchase trains. At least 250 people visited the train collection during An Albemarle Downtown Christmas Dec. 2, Brown said, which pales in comparison to more than a decade ago, when as many as 2,200 revelers lined up to see the trains.

With the help of volunteers such as Cox, Tommy Aldridge, Buddy Efird, J.W. Lowder, Lorrie Hatley and Bobby Ritchie, Brown ran the trains for the public year-round every Friday and Saturday.

“It is a labor of love,” Brown said. “A lot of people enjoy it and they come and help.”

For Cox, who can spend several hours at a time operating the many trains, it brings him back to when he was a kid.

“It takes you back to your childhood,” he said.

Since her husband’s death, Brown has continued maintaining the collection with help from the volunteers and has no plans to stop.

“I do it in memory of Jimmy,” she said. “He loved seeing the kids get so excited. I do it because of him.”