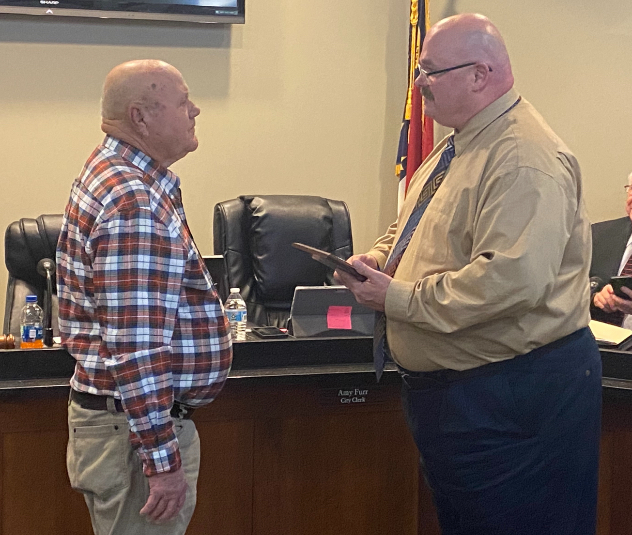 The Locust City Council bid farewell to one of its own Thursday night as longtime member JC Burris, who had served for roughly 20 years, stepped down after not seeking reelection.

“I talk a lot about pillars in our community…and true citizens of Locust and when I talk about that, JC is one of those people,” said Mayor Steve Huber, calling him one of the “most honorable people” he had ever met. He presented Burris with numerous items, including a plaque detailing his service and a framed picture of the current council.

Burris took time to hug and shake hands with every council member on the dias, as they spoke a few words about what Burris meant to them.

He is a man of few words, “but what you say is from your heart and your mind,” said Roger Hypes, holding back tears.

City Administrator Cesar Correa thanked Burris for his leadership, honesty and guidance, adding that “your service to the public is something that we all should admire and should aspire to.”

Many of the members, including Mayor Pro-Tem Larry Baucom, encouraged Burris to “not be a stranger” and continue to be involved in supporting Locust.

As he was leaving to take a seat in the crowd, Burris told everyone in attendance: “Thank you and may God bless Locust.”

Following the special recognition for Burris, several individuals were sworn in after winning reelection including Huber and council members Hype and Mandy Watson. Locust resident Barry Simms, who will take over for Burris, also took the oath of office.

“One of the things that has impressed me the most about you is your willingness to participate for as long as you have to prepare yourself for this position,” Huber said about Simm’s dedication to attend the meetings each month, noting he has big shoes to fill. “That to me is a testament to you.”

In a short comment to The Stanly News and Press after the meeting, Simms said he is looking forward to facing the challenges that will arise and working with and getting to know his fellow council members. 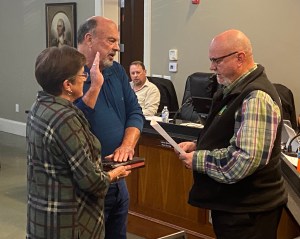 During the meeting, Correa revealed that after receiving proposals from three firms to help Locust craft a parks and recreation master plan, the city recommended Benesch, a professional services firm based in Charlotte.

Of the three firms that submitted proposals, Benesch stood out, as it already performed a similar service for Granite Quarry in Rowan County, Correa said. The other two under consideration were WithersRavenel, a civil and environmental engineering firm based in Cary, and Centralina Regional Council.

The council approved going forward with Benesch. Correa said the total price for the project would be $50,000.

The master plan — which will help guide the city’s actions over the next decade, including which projects to prioritize — will focus on parks and programs, but may also include greenways and bicycle and pedestrian routes depending upon citizen input, which should take place early next year, according to the RFQ document.

As part of helping Locust develop its plan, Benesch will assist the city with community engagement efforts (including creating surveys and organizing focus groups and public forums), assessing the city’s current facilities and comparing them to what is offered in similar-size municipalities and looking into what type of services and programs could be offered in the coming years, as Locust continues to increase its population.

• The council was presented with a clean end-of-year audit report.

• Locust Police was recently awarded a $24,000 grant to purchase new tasers for the patrol division.