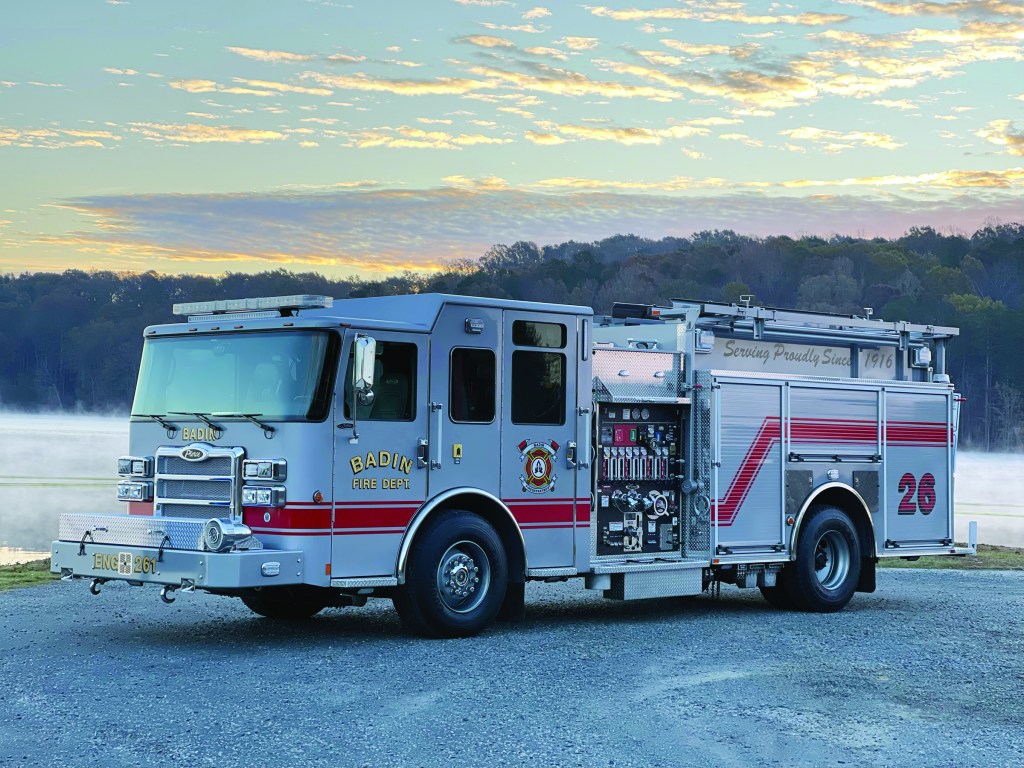 Timothy Jarman’s one-year anniversary as chief of Badin Volunteer Fire Department is one month away, but he’s celebrating early.

A 2022 Pierce Saber Custom Fire Engine was delivered to Station 26 on Lou Donaldson Boulevard at 6:45 p.m. Nov. 21 after several delays, many phone calls and a lengthy design process.

Badin VFD members and their advisory board discussed the purchase for months, but board president Dale Ward says things got serious when Jarman was elected as chief last year.

Ward recalls that they placed the order in April or May with the expectation of an August 2022 delivery from Pierce Manufacturing in Bradenton, Florida.

August turned into November. Even so, the newest member of the fleet will be fully operational by January.

Before Badin VFD was formed in 1916, firefighting in the aluminum company town was only a step up from a bucket brigade.

Today, first responders are summoned by a persistent siren from the firehouse. Back then, the town’s fire whistle summoned men with strong backs and hands to answer the call by rushing to one of 16 “hose houses” stationed around town. One such structure sits outside Badin’s Firehouse Museum today as a reminder of how much firefighting has changed.

The progression of the Badin VFD from those early days is chronicled in the coffee table book, “Badin, North Carolina: The First 100 Years,” published by Badin Historic Museum. Several pictures of an American La’France Ford, fully equipped, identify it as the first fire truck for the department purchased by Carolina Aluminum Company in 1937.

That very first fire engine inspired Jarman’s choice of colors for the latest addition to the Badin fleet.

“It goes back to our history,” says Jarman.

North Carolina doesn’t stipulate color choices for emergency vehicles, only for the lights, so no need to look for a flash of fire-engine-red rolling out of the firehouse.

The body and cab of the Pierce Saber engine is what Ward calls “aluminum gray with metallic flakes.” Gold and red lettering and a simple red band add complementary accents.

This beauty will replace Engine 262, a 1995 Pierce Freightliner engine, which the department will sell when the 2022 Saber comes into service.

Currently, department members are working out the placement of the equipment to be taken from the older truck and custom-mounted according to members’ needs.

“We have a diversity of volunteers,” said Jarman, which requires careful consideration because of differences in age, height and gender.

“We will make equipment accessible at the lowest level,” said Jarman.

The top-mounted ladder racks can be lowered mechanically and hoses can be accessed from the ground. With the new engine, all vehicle-extrication equipment will be housed in one truck instead of two — a more efficient use of manpower.

The cab compartment space was also designed for safety and ergonomics with the needs of Badin’s firefighters in mind. The compartment has room for the driver, plus five responders and five air packs. Attention was given to the structural integrity of the cab in the event of a traffic accident, especially a roll-over.

The standard cost for new vehicles is from $500,000 to $800,000, said Jarman, and the new Badin engine’s price tag was just under $600,000. Through a gift from the estate of Badin native Mary Grace DeReamer — daughter of G.G. Caudel, an early volunteer with Badin VFD — the department was able to make a substantial down payment on the purchase. Future payments will be made from Badin’s fire tax receipts.

Jarman’s career began as a volunteer when he was 16. He has 15-and-a-half years of service, a degree from Wilson Community College in Fire Protection Technology and a four-year degree in Fire Safety Engineering Technology from the University of North Carolina at Charlotte.

“I’m training oriented and want to build people up to be better able to serve,” said Jarman.

For the next several weeks, Jarman will see that Badin’s VFD members get the training necessary for operating their newest vehicle in service to the Badin community.