Fisher a ‘force’ for Badin, advocate for students

With the death of Iris Fisher on Dec. 7, the town of Badin lost a tireless advocate for the community’s growth and development, and Stanly County lost a long-time public education professional, proponent and supporter. 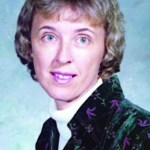 “Iris and (her late husband) Elvin were Badin institutions,” Town Manager Jay Almond said. “They’ve left a positive legacy in town through their many good works through the years.”

Likewise, former Badin mayor Anne Harwood, who worked with Fisher on a number of community projects, described her as “always a force for moving Badin forward.”

“She was a special person,” added Harwood. “When Iris was focused on reaching a goal, she was going to get it done.”

Albemarle attorney Charles Brown served with Fisher on the Stanly County Board of Education, and spoke of her attributes as an educational leader.

“Iris was very well-prepared at all times. She did her homework and familiarized herself with the issues,” said Brown.

Describing Fisher as “highly respected” by her fellow board members, Brown said, “Iris was always guided by what was best for the students. And more importantly, she was a good listener,” he added. “She was an excellent communicator, and in conversation, she always spoke with people … never down to them.”

Brown recalled one board meeting when a citizen addressing the board was incessant in delivering his remarks, and had gone past his allotted time.

“I sat next to Iris, and I slipped her a note saying, ‘I’ve heard about all of this I can stand,’ ” Brown said. “But rather than cutting the speaker off, Iris slipped me a note back that said, ‘I know him … give him just a little bit longer and he will prove himself wrong.’ ”

In addition to having served as a guidance counselor at North Stanly High, Fisher also served as dean of student services at Stanly Community College before her retirement, where she worked for a short time with eventual SCC president Dr. Michael Taylor.

“I didn’t work with Iris very long, as she retired shortly after I came to SCC,” said Taylor, “but that was long enough for me to realize she was a strong student advocate. If Iris was doing it in Student Services, then it was good for our students.”

“I enjoyed working with her, but unfortunately for me it was not that long. However, she left a legacy at SCC through all the students she helped,” he added.

In retirement, Fisher was known for her enthusiasm and tireless efforts toward transitioning Badin from Alcoa’s “company town” to an independent one, and worked alongside Harwood on many projects designed to promote the community. In doing so, the two developed a close relationship.

“I have really missed her presence here in Badin,” said Harwood, noting that Fisher had been a resident in the Spring Arbor assisted living facility in Albemarle for the past several years.

“She was a good friend, and she will be missed,” Harwood added.

Brown also expressed his respect and gratitude as well, adding, “It was a pleasure to serve alongside her. I learned a lot from Iris.”