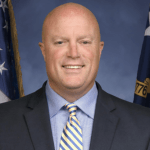 Crisco was elected sheriff in 2018 and reelected in November. This will be his first time serving on the commission.

Prior to his election as sheriff, Crisco worked as a detective for the Stanly County Sheriff’s Office.

Crisco fills the seat on the commission left vacant by the unexpected passing of Sheriff Landric Reid of Anson County, who died in September.

The commission, which was created in 1983, is made up of 17 members appointed to staggered terms. Members are responsible for making decisions related to administrative rules that govern the certification program for all justice officers in sheriffs’ offices. Justice officers include deputy sheriffs, detention officers and telecommunicators.

The commission is also responsible for determining whether new or current justice officers should be allowed to receive or keep their law enforcement officer certificates.